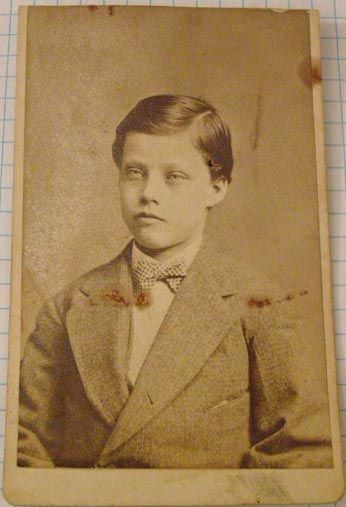 In 1874, a 14-year-old boy named James Pomeroy was arrested and convicted of murder in Massachusetts for the deaths of two children. He was also suspected of assaulting at least half a dozen other children, and possibly more murders. Donna Wells, a former archivist at the Boston Police Department, writes about how she fairly randomly found a photograph of Pomeroy (above), which ends up being the only known photograph of Pomeroy as a teenager. His crimes were pretty chilling.

When fourteen-year-old Jesse Pomeroy was arrested in 1874 for the murder of Horace Millen, he was thought to have tortured at least six children and tortured and murdered two more. The two murder victims, ten-year-old Katie Curran and four-year-old Horace Millen had both been stabbed and nearly decapitated. Katie also had a fractured skull and several broken bones. Horace had also been nearly castrated, had one eyeball deeply pierced, and been set on fire. The victims that had managed to survive his attacks had suffered whippings, stabbings, beatings, which included broken noses and split lips, vicious bites to the face and buttocks, attempted castration, and attempted scalping. At the time of his arrest for Horace Millen’s murder, Jesse’s reputation in Boston as the “Boy Torturer” was firmly established.

Read how the photograph was found and identified at Murder by Gaslight. But you really want to find out what happened to the 14-year-old killer, and you can read that at Wikipedia. -via Strange Company