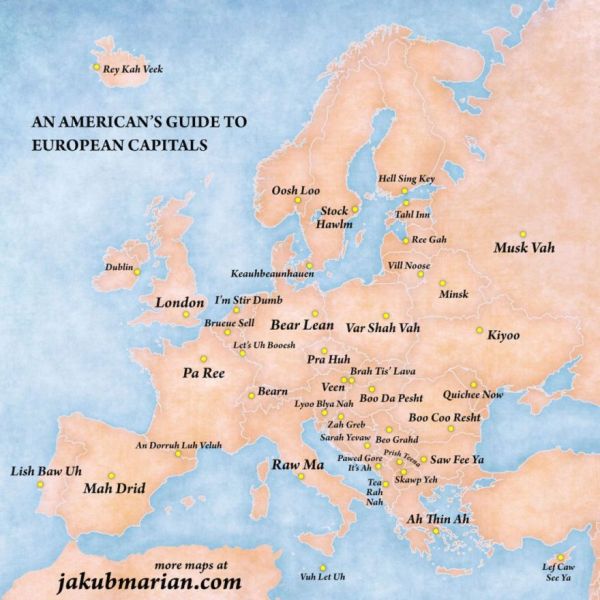 Czech linguist Jakub Marian created a map of European capitals that presents familiar English written phonemes to show us how residents of those countries pronounce their capital city. It’s an interesting task to go through and figure out that Kiyoo is Kiev, Var Shah Vah is Warsaw, etc. Since he posted it on April Fool’s Day, he included some questionable explanations for the city names.

The Norwegian capital, Oosh Loo, was named in silent protest against the Swedish occupants after the Swedish–Norwegian War. In the very concise Norwegian language, “Oosh Loo” means roughly “Shoo, that’s not your loo”.

See the map and more jokes about it at Marian’s site. -via Laughing Squid

A Colorful Pediatrician’s Office Kids Will Love to Visit

A World-Famous Ancient Collection, on Display for the First Time, Awaits Visitors in Rome

CES 2021:The Future Looks Even Brighter for LG OLED Televisions

Spindletop: The Gusher That Launched The Oil Industry

A Gift Guide for the Design Obsessed People You Love