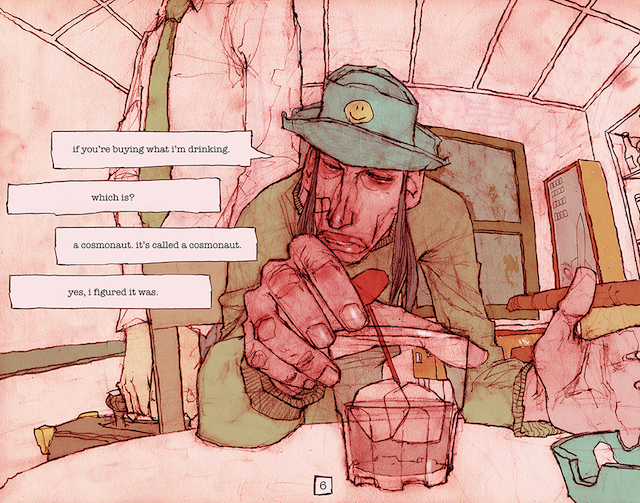 As Los Angeles-based illustrator and writer Kevin Finney builds the world of his complex, mysterious, and paranoid graphic novel, he shares it on Instagram. Those who follow Finney are able to see the highly detailed and impressionistic artwork alongside the text of his work-in-progress, The Cormorant.

Finney, who also does illustration work for magazines, as well as some op-ed work, tells The Creators Project the graphic novel follows a character, known as “The Cormorant,” who is the subject of a NASA experiment known as “The Sea Project.” A lachrymore, or someone who is given to weeping, the Cormorant has the power of causing debilitating and crippling sadness in those he encounters. In fact, his ability can cause this emotion on a wide scale. 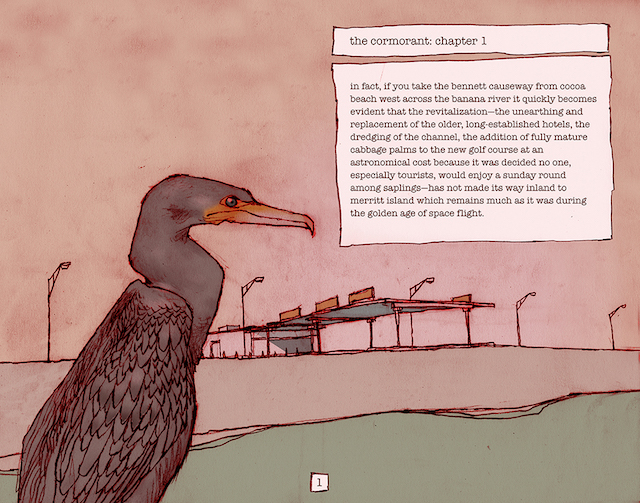 “It takes place in the 1980s during the Reagan administration but is not nostalgic,” Finney tells The Creators Project. “It [also] takes place in Bangkok and Managua, Detroit, and Cocoa Beach (of course). It has CIA interaction. It has assassins. It has the dark side of the moon, and a woman who has taken the name of Hester Prynne.”

“He is used by NASA to supplement their decreasing budget, often carrying out operational tasks for government agencies,” he adds. “When someone begins destroying members of the Sea Bird project (whose locations are supposed to be secret), it is decided the Cormorant should be brought in from the field… A shuttle launch is just weeks away; which, by-the-way, it would be great to have go smoothly.”

Finney’s ongoing graphic novel responds to the complexity and paranoia of writers like Thomas Pynchon (Gravity’s Rainbow) and Colson Whitehead (The Institutionist), especially their themes of the individual versus the system. He is also into authors like Sjón, who use magical realism to tell stories, as well as Peter Mathiesson for his sense of natural order. Another influence on Finney is T. S. Eliot’s “The Waste Land,” which he reads often, particularly for the author’s descriptions of decay. 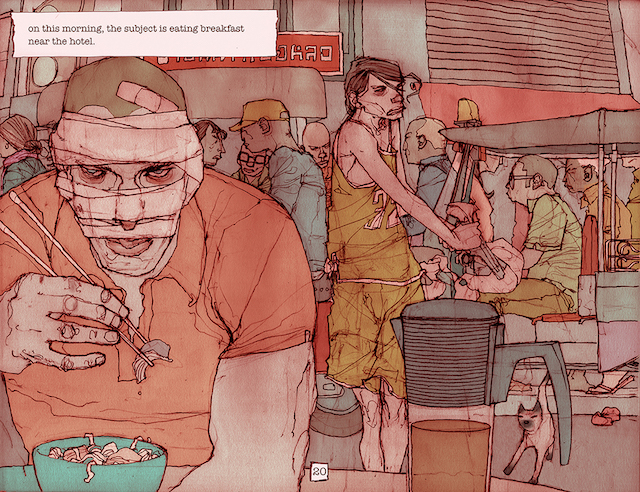 “I am deeply moved by Andrei Tarkovsky’s films—the mood, the vagueness, the unobtainable,” says Finney. “I am a fan of the unexplained. Watch something like Tarkovsky’s Mirror. I don’t think you are supposed to know what exactly is happening because it’s about memories and memories are corrupted over time. I think Tarkovsky said that even he doesn’t understand certain scenes.”

The French New Wave filmmakers, with their themes of alienation and dislocation, are also influences on Finney and The Cormorant. Artists like Barry McGee and Margaret Kilgallen, as well as graphic novel creators Gipi, Adrian Tomine, Chris Ware, and Moebius, are also inspiration. Finney also declares that Sam Harkham’s Poor Sailor, which traces the story of a man who follows his brother on a tragic trip out to sea, is the best thing he’s ever read.

This isn’t to say that these influences come through in the pages of The Cormorant—though there are some stylistic parallels with Gipi’s style. It’s more that the range of inspirations allow Finney to create pages that feel one minute like a book, the next like a film, then a comic, and so on.

As great as The Cormorant looks, Finney stills feels that he is doing it wrong. He admits he doesn’t have much of a system. For each graphic novel he keeps one book for the script and another for the drawings.

“But, I often draw the pictures first and then I figure out what the text is going to be, which probably seems backwards,” says Finney. “I don’t like writing a long scene and then finding that I am drawing the same panel over and over to deliver the scene. I want the art to do more than that, so often the art takes the lead.” 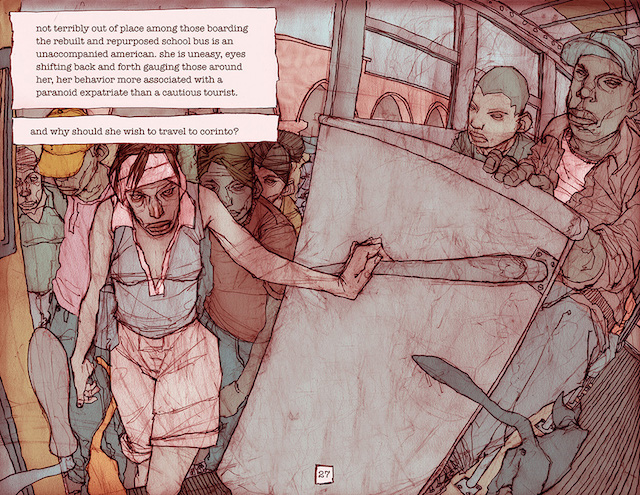 Finney likes sharing panels from The Cormorant on Instagram because he likes the immediacy of posting-as-he-goes. The ability to share and get near instant feedback from people he doesn’t know is also something he likes.

“I like that it’s a global proposition,” says Finney. “I direct message with people from around the world—that makes me happy. I’m also trying to promote and cross-promote the various projects I have going on. Hopefully, someone who likes The Cormorant will also like Turd and Things We’ve Found in Our Traps.” 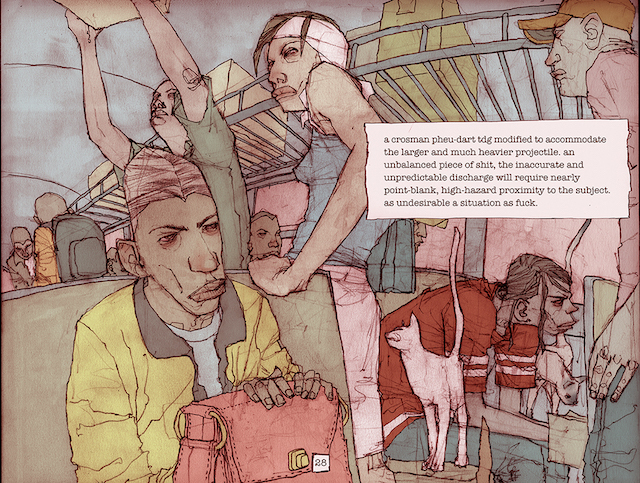 “I have five [graphic novels] going right now and am posting them all on my site and on Instagram, rotating them on Instagram a chapter at a time,” he adds. “It’s a bit of an experiment to juggle give at once and make them unique, but also allow them to share common themes and to embed my personality and style into each.”

Finney expects to be finished with The Cormorant some time this year. Once completed, he hopes to find a publisher, or perhaps self-publish through a crowdsourced edition.

Click here to see more panels from The Cormorant on Kevin Finney’s Instagram, and here to check out his other graphic novels.

Rating An Artist Is Sharing His Mysterious Graphic Novel One Panel at a Time is 5.0 / 5 Votes: 2
Please wait...
Loading...
Related articles