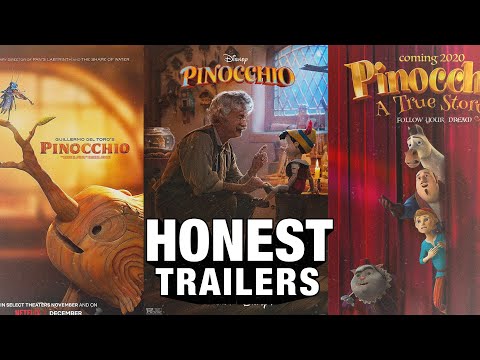 For some reason, we had three versions of Pinocchio released in 2022. First there was Pinocchio: A True Story, a Russian cartoon released in the US in February. Pauly Shore is the voice of Pinocchio in the English dub. Few paid any attention to that one. Then there was Disney’s sort-of-live-action remake Pinocchio starring Tom Hanks as Geppetto. Like their 2019 movie The Lion King, it’s hard to call it a live-action movie when almost all the characters are animated. Finally, there was Guillermo del Toro’s Pinocchio, released in November. It’s a stop-motion animation that may still be playing at a theater near you. There can’t be too many people who saw all three versions, but Screen Junkies did so we don’t have to. Watch three short Honest Trailers in a row, and they’ll tell you which version of Pinocchio you should see, if you were planning to see one.