You may have never heard of the multiocular O. It is a letter that only appears in literature once, in a Cyrillic manuscript of Psalms dated around 1429, which was, of course, hand-lettered. It was used in the phrase “many-eyed seraphim,” which makes perfect sense. But even though it was used only once, the folks who develop and maintain Unicode are excruciatingly thorough, so in 2008 they made the multiocular O usable in the computer age. It looks like this: ꙮ. They also included the monocular O (ꙩ), the binocular O (Ꙫ), and the double monocular O (ꙭ), which have been used more in history, but are rarely seen today. 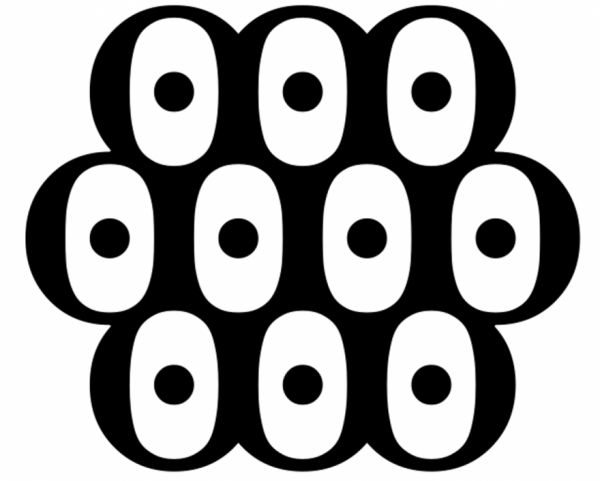 Anyway, the multiocular O in type only has seven eyes, while the original from the 1429 manuscript has ten. The Unicode Consortium was notified of this oversight by a Twitter thread. So earlier this month, in the spirit of being excruciatingly thorough, Unicode has updated the multiocular O character to ten eyes, as you see above. Presumably, there will have to be some software updating to Unicode version 15.0 before I can type it that way.

While this is all very interesting, what we really need is the story of how that ten-eyed O came about. In the discussion at Metafilter, Eyebrows McGee gives us a tale of what probably happened. She begins with an explanation of how in addition to singular and plural words, there are some dual word forms that mean exactly two of something. The few English words of this form include “both” and “neither.” But other languages have many.

ANYWAY, in some Old Church Slavonic manuscripts, where a dual form was used (most often to say “two”), the scribes would turn “two” — двое– into двꚙе with the “double O” glyph.

Some OTHER scribes thought this was amazing, so specifically in the word “eyes” — “очи” — which is a dual-form noun because they typically come in twos, they’d use the “double monocular O” (Ꙭ, aka “boobs”) to make two Os and turn them into eyes, thus: ꙭчи. See? TWO EYES!

WELL. ANOTHER scribe comes along and says, “two eyes? Seraphim have MANY eyes!” and when he comes to the phrase “many-eyed seraphim (Серафими мн҄оочитїи), he chooses to render it as “Серафими мн҄оꙮ҄читїи҄”. CAUSE THEY’VE GOT A LOT OF EYES, y’all.

ONE TIME. This occurs ONE TIME in ONE MANUSCRIPT, but Unicode is dedicated to making sure manuscripts can be replicated accurately in unicode, so in 2008 we get a multiocular O.

BUT IT GETS EVEN MORE AWESOME, because they’re updating it to the full 10!. Although do look at the manuscript and note that the original 10-eyed multiocular O has FLAMES LICKING OUT ON THE SIDES, so Unicode should get on that!

Anyway, I 100% approve of literally all of this, because there is nothing I love as much as TAKING A JOKE WAY TOO FAR, especially when the joke is more than 600 years old.

Yes, we all love 600-year-old jokes, even those that were only funny to medieval scribes, especially when those jokes come back to make the internet laugh. You can find more links on this subject at Metafilter.