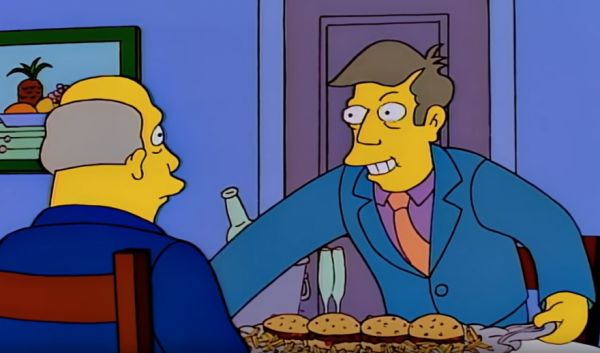 If you wander through various corners of the internet, you’ve seen memes based on Steamed Hams, a wacky Simpsons skit where one minor character has another minor character over for dinner and things get out of hand. As wildly popular as the sequence is now, you might be surprised to learn it was originally aired in 1996! And it wasn’t even written to be a main story. Writer and showrunner Bill Oakley tells how it came about.

Midway through Season Seven, when Josh and I were the showrunners, we realized we were never going to be able to do any of those little shorts. One of us, Josh or me, had the idea of, “Let’s do a whole episode of nothing but those things.” This was just around the time Pulp Fiction had come out and there were a couple of other things that were little bits and pieces that were intertwined like that, so wewere like, “What if we did a whole episode like that, but with all the characters in Springfield?” We fell in love with the idea immediately, so that was the genesis of it.

We had to figure out how we were going to do this, so we decided that we were going to have everybody on staff get a chance to write for their favorite character. To make it fair, it was basically like a football draft and everybody got to pick a number and go in order and call dibs on their favorite characters to write a little segment for. My very first choice was Superintendent Chalmers and Principal Skinner. It might’ve just been Chalmers, but I think Skinner came along with the package.

So the ridiculous vignette came about as one of a collection of writing experiments. But how did Steamed Hams become such a viral meme all these years later? Read the history of both the Simpsons scene and the meme beginning with how it vexed an Australian grocery chain at Mel magazine.