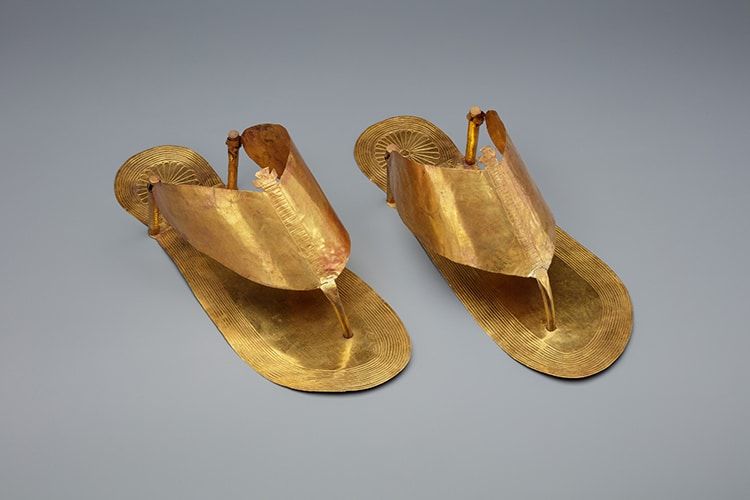 When ancient Egyptians were buried in their huge and lavish tombs, a lot of their riches were left in their graves. These items were believed to follow the deceased to the afterlife. One of the items that were left to facilitate the transition to the afterlife are sandals. Now these funerary sandals aren’t like our regular leather ones, no! Sandals for dead royals were often crafted in shimmering gold:

Among royal burials, these rich golden sandals were often occupied by small golden “caps” for the fingers and toes. These are called finger and toe stalls. They protected the extremities of the mummy in burial. According to ancient Egyptian beliefs, the dead were supposed to be entombed as complete bodies—sometimes including prosthetic limbs. Non-royal mummies also were buried with stalls of lesser metals and even clay. Today, most stalls date to the 18th dynasty of the New Kingdom. From about 1550 to 1290 BCE, this period includes the famous boy king Tutankhamen.

If average people used average finger and toe stalls, whatsort of sandals were they buried with? Braided papyrus and leather were common materials. A sturdy sole was attached to the foot by straps much like modern sandals. Sandal makers specialized in crafting these items for the living and the dead. Among the many paintings of everyday life included along tomb walls, these ancient cobblers make appearances. Today, most extant sandals are funerary in nature, preserved underground in tombs. While many of the examples below date to the 18th dynasty, the sandals and use of stalls continued well into the period of Roman Egypt.