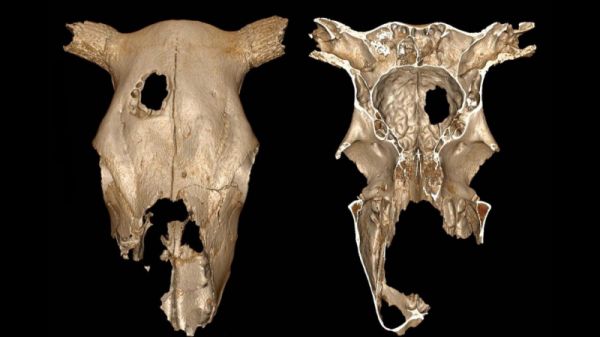 There are variety of possible reasons for the ancient practice of trepanation, or drilling holes in a person’s skull, but whatever you call it, it was brain surgery. What is surprising is how good ancient practitioners were at it, and how similar trepanations were around the world. A new science paper may have a clue as to how that happened. In 1999, a 5,000-year old cow skull was unearthed at an archaeological dig in France. It had a hole in it. Researchers assumed the hole was a gore from another cow’s horn, and put it away. A more recent examination shows that it was surgery.

Physical analysis of the hole, which measures 64.5 mm long and 46.5 mm wide, shows no trace of fracturing or splintering, which means it wasn’t caused by a powerful blow, such as goring from another cow or a puncture inflicted by a stone tool. At the same time, the hole shows the characteristic signs of trepanation, namely a square-like shape and cut marks made around the gap. No marks exist on the skull to indicate that pressure was applied by an external force. This hole, the researchers argue, was cut—quite literally—with surgical precision.

The hole exhibits no sign of healing, which means the procedure was performed on a dead cow, or the cow did not survive the surgery.

This is the earliest concrete example we have of veterinary surgery, but we don’t know the reason. It’s possible, but unlikely, that they were trying to save the cow. Or, whether the cow was dead or alive going into the procedure, it could have been surgeons practicing for human trepanation. Read about the ancient cow surgery at Gizmodo.