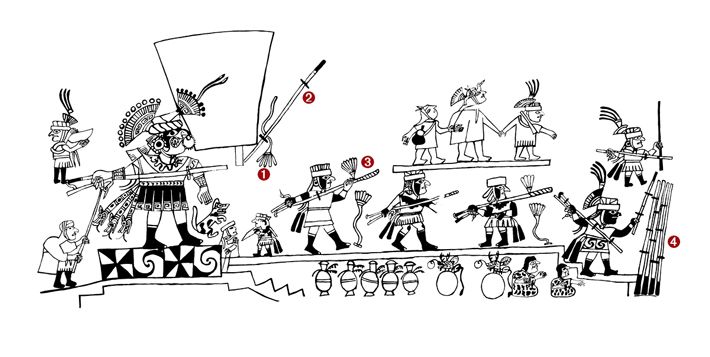 Paintings and murals on ancient artifacts may sometimes depict actual events or rituals being done by a society and in some cases, they are only figurative and might be a narrative of the culture’s myths or lore surrounding their beliefs and values.

In Christopher Donnan’s research on Peruvian artifacts, in particular the pottery of Moche culture, he noticed something that resembled badminton of today. Going deeper into the meanings and significance of these paintings, he finds that it is rooted in Moche culture.

There were also depictions of ceremonial badminton contests that showed groups of figures armed with a type of spear-thrower called an atlatl, which is essentially a stick with a handle on one end and a hook or socket that attaches to a spear on the other.

Participants seemed to use their atlatls to hurl spears with feathered objects attached to them. Like the sacrifice ceremony, ceremonial badminton could have been an actual event or a supernatural contest that occurred largely in the Moche mythological realm.

“When I looked at these rituals I often wondered if the activities were real. Did they really do that?” says Donnan. Now, building on decades of archaeological discoveries and his own extensive experience analyzing depictions of Moche rituals, Donnan, an archaeologist at the University of California, Los Angeles, has re-created ceremonial badminton.