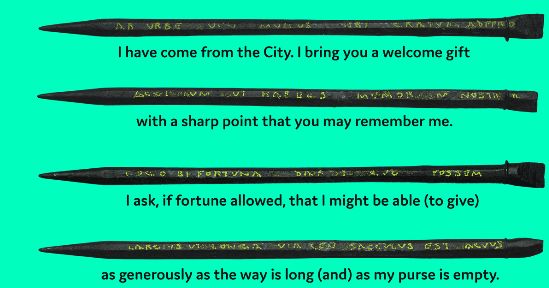 Somewhere around the year 43 CE, the Roman Empire established a settlement in Britain known as Londinium, which eventually became London. Traces of that settlement are still being discovered, like the artifacts found when Bloomberg broke ground for their new European headquarters. One of the finds was a stash of 200 iron styluses, used to write on wax. One stylus is inscribed with a poem of sorts. In English, it says,

“I have come from the City. I bring you a welcome gift
with a sharp point that you may remember me.
I ask, if fortune allowed, that I might be able (to give)
as generously as the way is long (and) as my purse is empty.”

Okay, Burma Shave wasn’t on the stylus; I just couldn’t resist adding it. The modern translation is even more familiar: “I went to Rome and all I got you was a cheap pen.” Presumably, the t-shirts of the Roman Empire weren’t built to last 2,000 years. The joke stylus is just one of 14,000 artifacts retrieved from the construction site, and is now on display at Ashmolean Museum in Oxford. Read more about the souvenir and other objects from the site at LiveScience. -via Metafilter