Last week, Anthony Hopkins, the award-winning actor best known for portraying Hannibal Lecter in The Silence of the Lambs and more recently for his role in Westworld, became an internet sensation when he posted a TikTok of himself dancing to Drake’s hit song “Toosie Slide.” Behind him loomed a large painting showing the outline of a face against a semi-abstracted background of bright colors. At first glance, the painting might look like a work by Francis Picabia from the artist’s famed “Transparencies” series. In fact, the work is by Hopkins himself—though Picabia is among his influences.

To learn more about Hopkins’s artistic background and how he’s living under lockdown, ARTnews reached him by phone at his home in Malibu, California.

ARTnews: What was your earliest experience with making art?

Anthony Hopkins: I’m not a scholar or academic by any stretch of the imagination, but when I was a little boy, I started drawing and playing the piano when I was about five. I guess I had some creative, artistic streak. I wasn’t very good in school. I drew a lot and my mother encouraged me, like mothers do, because I didn’t seem to know much else. And there was a young girl, who was much older than me, she was about 17 or 18, and she was the daughter of a neighbor of my parents. Her name was Bernice Evans. She’d been to London and she’d studied art. She did a drawing of me in pencil and chalk on cartage paper. I was about six, and it was just after the war had ended, around 1947 or ’48. She invited me to a studio above the post office in Port Talbot and she introduced me to painting.

Did you ever think of becoming an artist?

When I was in school, at about the age of 15, I started to draw, and somebody said, “You should be a commercial artist or a cartoonist.” I thought about doing that, but I thought too much skill was required, and I’m not a good student. Soon, the years went by, and I gave it up. 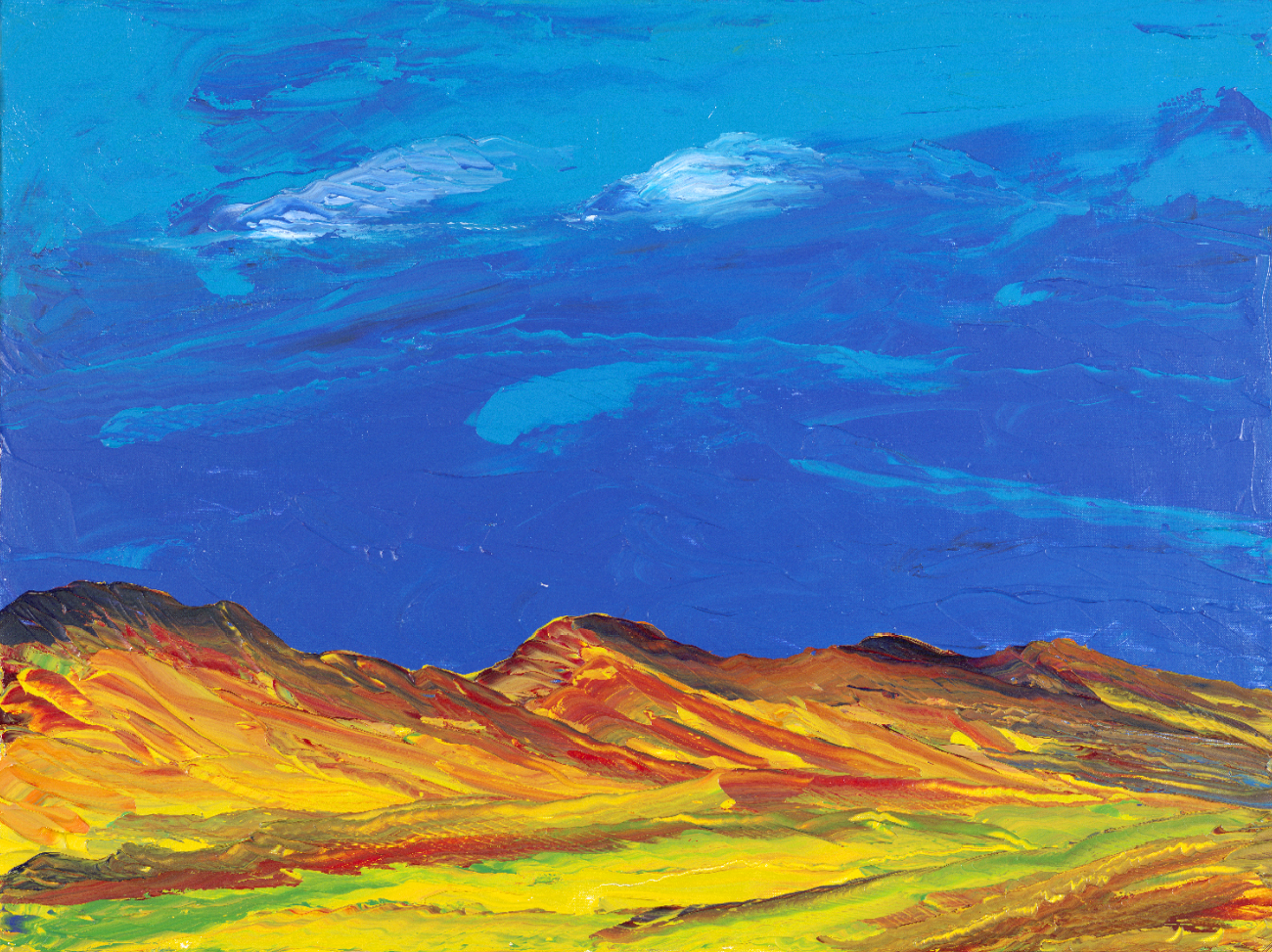 How did you get back into painting?

Years ago, Stella, my wife, found some old scripts of mine here in the house full of drawings in the blank pages. They’re drawings in multicolored ink pens, like Sharpie’s, that I managed to dig up. I’d paint landscapes and faces. They’re really weird drawings. She said to me, just before we got married in 2003, “You ought to start painting,” but I said, “No, no.” But she wanted me to do paintings for the wedding guests, about 75 of them. And I said, “Are you crazy?” But she said, “Just do it.” So I ended up painting these landscapes and we gave them to the party guests. That’s how I started up again.

Have you taken any art classes since you took it back up again?

No, I’m a kind of a free-for-all bandit, I guess. A friend of mine, Stan Winston, who did Jurassic Park’s special effects for Steven Spielberg, was a great artist. (He died prematurely about 10 years ago, unfortunately.) He came over one day for a barbecue in Malibu, and he went into the studio, looking for the loo, and there were my paintings on the wall. He said, “Who did these?” And I pulled a self-deprecating face and said, “Well, I did.” He asked me why I had pulled that face and I told him that I had no training. And he put his hand in mine and he said, “Don’t. Don’t do any training. Don’t take any lessons because you’ll kill it. You’re an artist. You’re a painter,” and he added, “I couldn’t paint like that because I’m an academic.” He encouraged me to just paint. That’s what I do and it’s a freedom that I have. I treat everything like that—music and acting. There are techniques, and as an actor I’ve had years of experience, but it’s mostly improvisation. I’m creative, which is one thing, but it does take discipline.

In lockdown, I get up in the morning. I work out and then I do something. I tend to want to binge on watching British detective TV series, and then I say, “Time to do some work.” So I read or I play the piano all day or I paint. I’m writing three screenplays. I have a very highly charged brain I suppose. It’s the way I’m constructed, nothing I can take credit for. I’m very fortunate because I have space to paint. 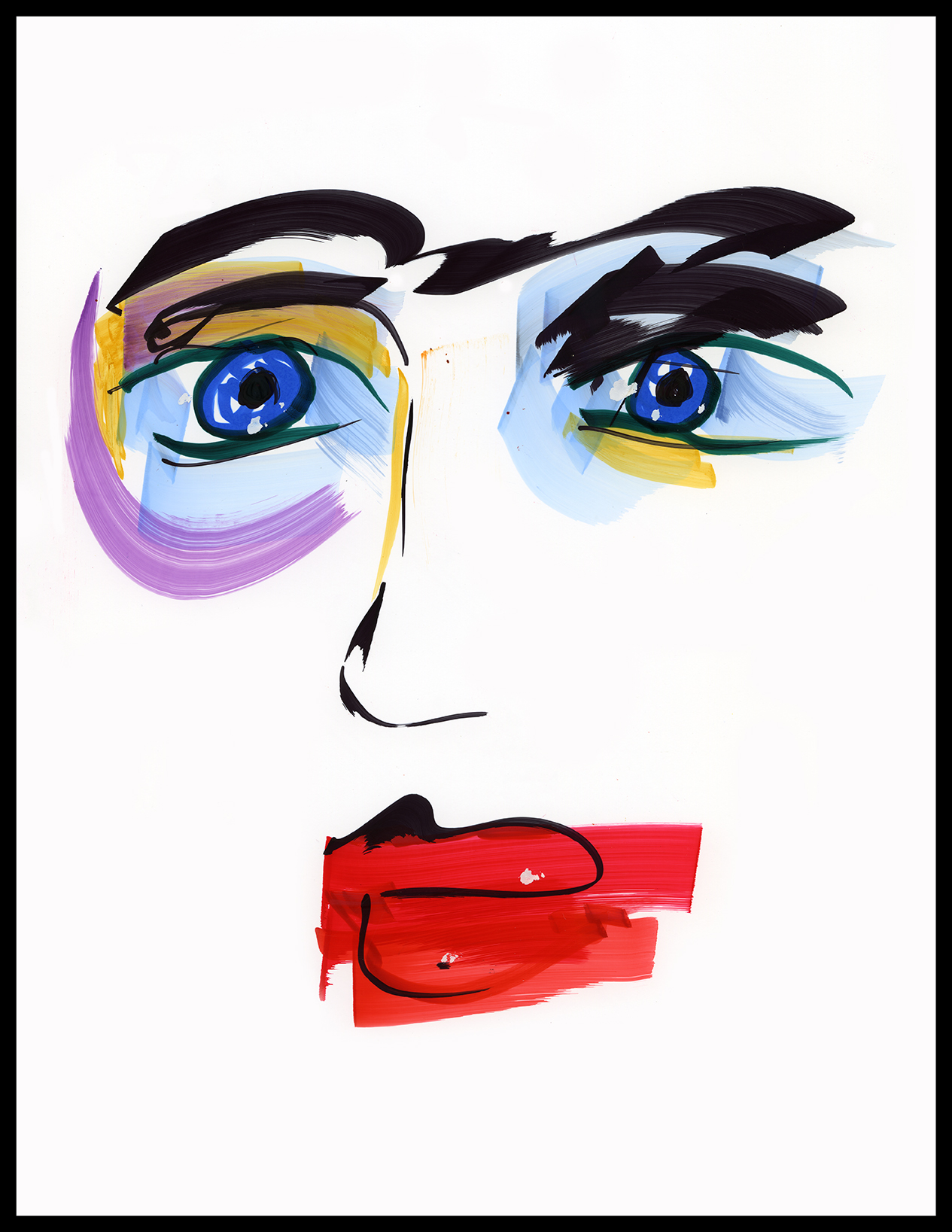 How improvisational is your approach to painting?

I paint freely. The writer Henry Miller wrote a book called Paint as You Like and Die Happy. Henry Miller used to just paint and paint—he didn’t analyze it or worry about it. That’s what I do. The painting you saw in the TikTok video was one I completed recently. I sort of messed it up, and thought, why did I do that? But I never throw anything anyway, so I went over it and recomposed that whole facial structure. I love bright, bright colors. That’s the part I like. I paint these faces. I’m influenced by people like Oskar Kokoschka and Francis Picabia.

It takes me a long time to paint, but it’s not painstaking. I improvise and then I stop. I might go back to it a few weeks later and then complete it. And then I’ll think, Okay, enough, and start on something new. I’m hyperactive. Sometimes I’ll start on three paintings at once. I try to change the style of paintings, but there’s no style to it. I experiment with oils and acrylics and ink and just mix it altogether. Painting is something I really enjoy, like playing the piano. I have a lot of fun with it. I just paint for the sheer enjoyment of it.

I like L. S. Lowry and Lucien Freud. And Francis Bacon, with his distorted figures, is one of my all-time favorites. And one of the most intriguing artists I’ve ever encountered—and he described himself as a commercial artist—was Maxfield Parrish. His choice of colors was ethereal. Years and years ago, I once found this book of his work and the colors just jumped off the page. Who else do I like? Turner, Picasso, Degas, Monet. I’ll tell you an astonishing thing. When I went to Paris and went to the Musée d’Orsay and then I went to the van Gogh room—I’m not one to make hyperbolic statements, but when I walked into that room, it was like a kick in the face. The vibrant colors of that man’s life. 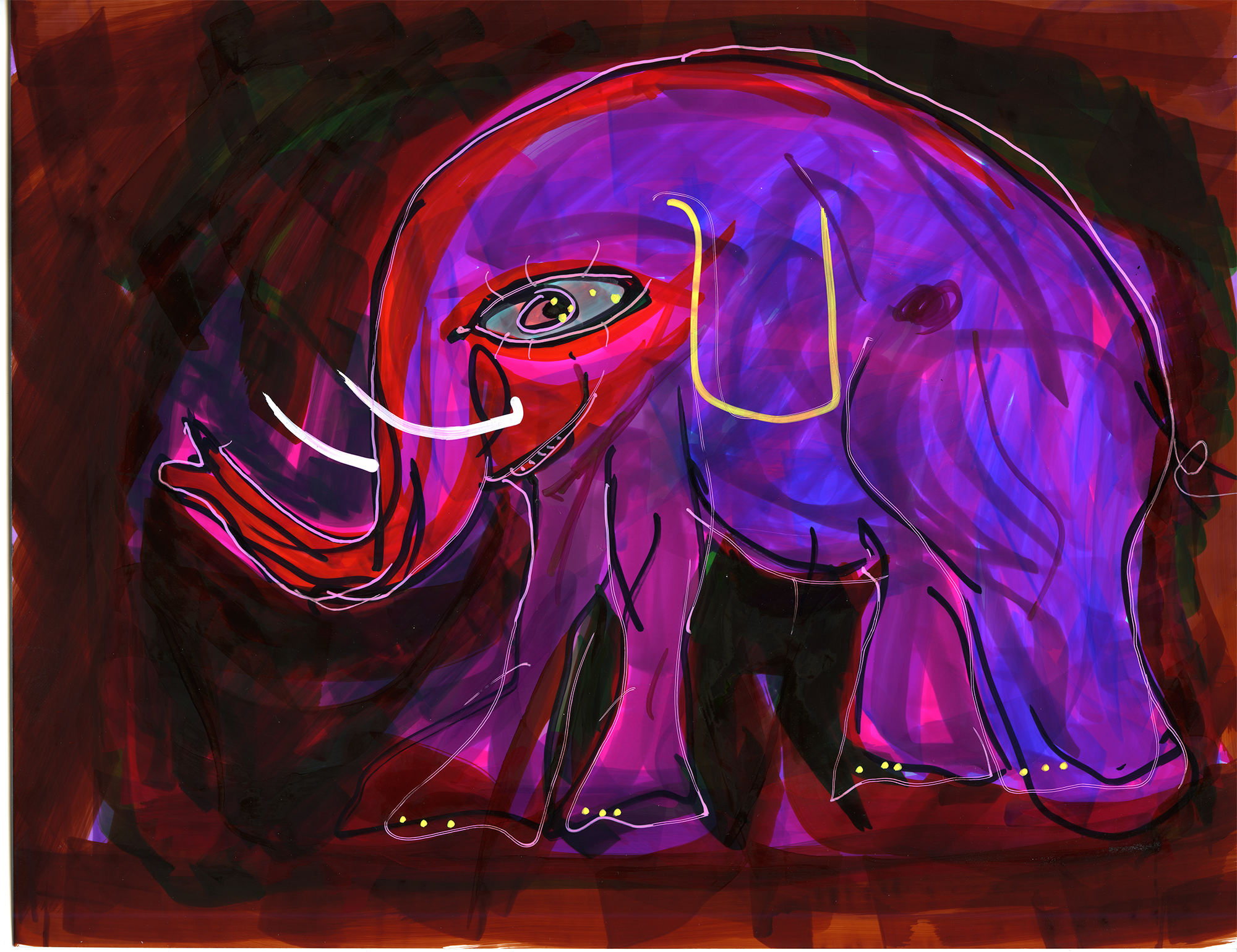 You played Picasso in the ’90s. Are you inspired by him? What was that experience like?

God, that was a long time ago. My personality is far removed from the firebrand he was. I come from a much more sedate Welsh background. There is a wonderful insight about Picasso that really impressed me about a man with a savage passion for life. This is a true story. He was dating his young girlfriend Françoise Gilot. One Sunday morning, just after the war, he took her for a walk up to Montmartre, where they had been painting in the early 1900s. He said, “I want you to meet somebody.” And they went into a ghastly room and there was an old woman in there dying. She was thin and emaciated, basically rotting away. Françoise Gilot was revolted by it. She said, “Why did you take me to see that old woman?” He said, “In 1900, there was a Spanish poet called Casagemas, and he wrote about her beauty. There’s the lesson—it’s all surface.” And for her it was a great lesson: vanity, vanity, vanity, all is vanity. That’s what he was about: mortality, passion, death.

Do you have any advice for people who might think about starting to paint under lockdown?

It’s very difficult to tell people you have to be creative. It’s all very well for me to say that but people are in stringent conditions where they don’t have the opportunity to do. But my niece, who is a young girl living in Britain, started writing me texts in lockdown, and I wrote back. She said she was learning to cook banana bread, but it was frustrating. And I asked her if she paints or draws, and she said she had taken art classes. I told her to get some paints if she could and just paint or whatever she could manage. And just go for it. “Don’t analyze it or think it’s good or bad,” I said to her. And the same thing goes with writing or anything else. If someone wants to write a book or a play or a screenplay or a cookery book—it doesn’t matter—do it and don’t worry about it. What I find with painting is that improvising gets the brain and the analysis out of the way. There’s a famous letter that says, “just paint badly.” Doing it badly suddenly frees you up. You become free of the impediments of thought.

Photos: How the Ecological Art Practices of Today Were Born in 1970s Feminism