Nearly everyone’s worried about the economy. Inflation, rising gas and food prices have people anxious about how they’re going to be able to keep the lights on, a roof over their loved ones’ heads, and food in their stomachs. And the added bonus, the cherry on top? Getting to and from work is now more expensive than ever with gas prices soaring, eating into paychecks and savings.

You’d think that with seeing the signs, the high-earners in charge at various companies would have a bit more sympathy for their employees. Alas, we were too naive! A leaked email, allegedly sent out by Wayne Pankratz, the executive director of operations of American Franchise Capital (i.e. AFC which owns a lot of Applebee’s franchises in the Midwest United States), has outraged Applebee’s employees and the internet. Some employees even quit.

In the email, Pankratz hints that skyrocketing gas prices are an opportunity to lower wages because people will be getting desperate. Of course, he put it a tad more subtly, but employees were disgusted to read this. Scroll down for the full email, the reactions from people online, and what Applebee’s said about Pankratz’s thoughts. (Spoiler warning: they were quick to distance themselves from him.) Let us know in the comments what you think and how you feel about this, dear Pandas.

Bored Panda got in touch with redditor u/pool_fizzle, who helped spread the leaked email all over the internet. It’s them we have to thank that a lot more people saw the leaks than they would have otherwise. They told us that they’re angry “beyond all belief” after seeing the email. However, they also felt a sense of relief. “We, the retail and restaurant workers, finally had a piece of evidence. A concrete example to show the world how we are treated. I posted the emails to Reddit within minutes of initially seeing them on Facebook,” they told Bored Panda.

“I don’t want to speak for the employees or put any words in their mouths, but I can imagine they may have had similar feelings. I hear some of them walked out. I applaud them for that.” Scroll down for the redditor’s full thoughts about Applebee’s, the importance of unionizing, and their suggestion to join a general strike on May 1. 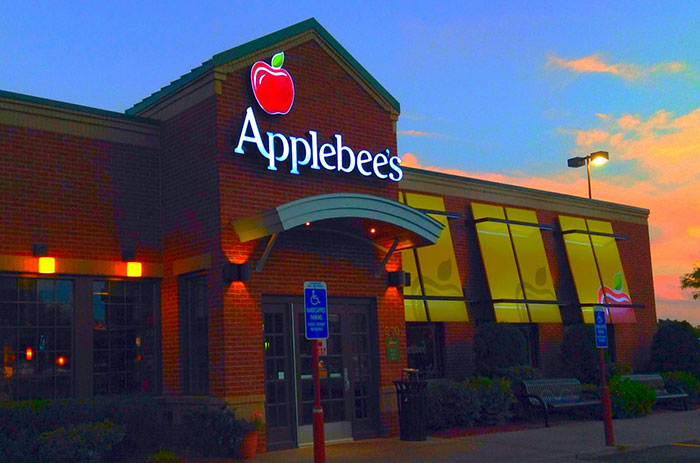 A disturbing email got leaked, written by an executive at AFC that runs 49 Applebee’s franchises in the Midwest US 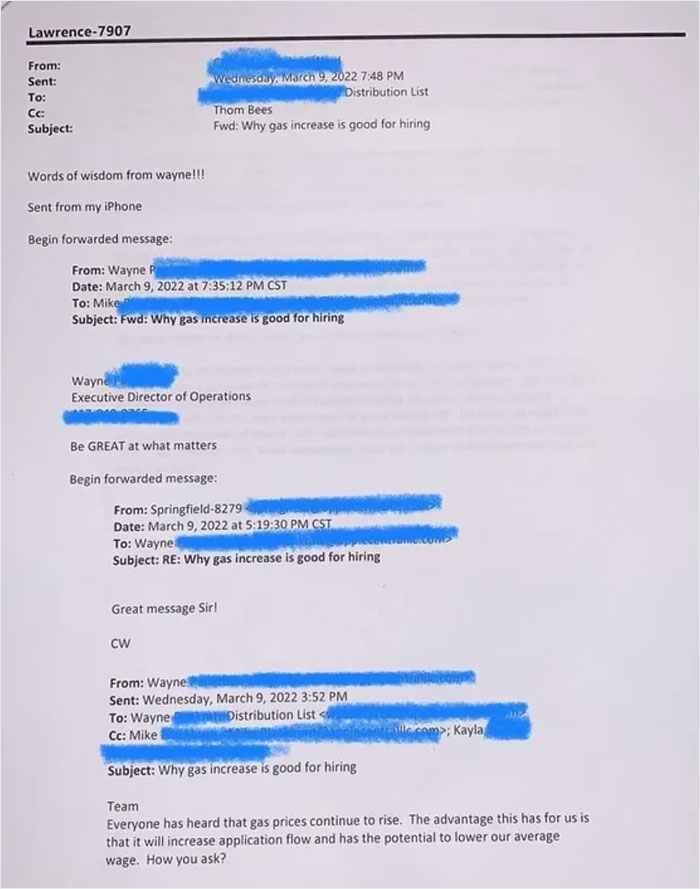 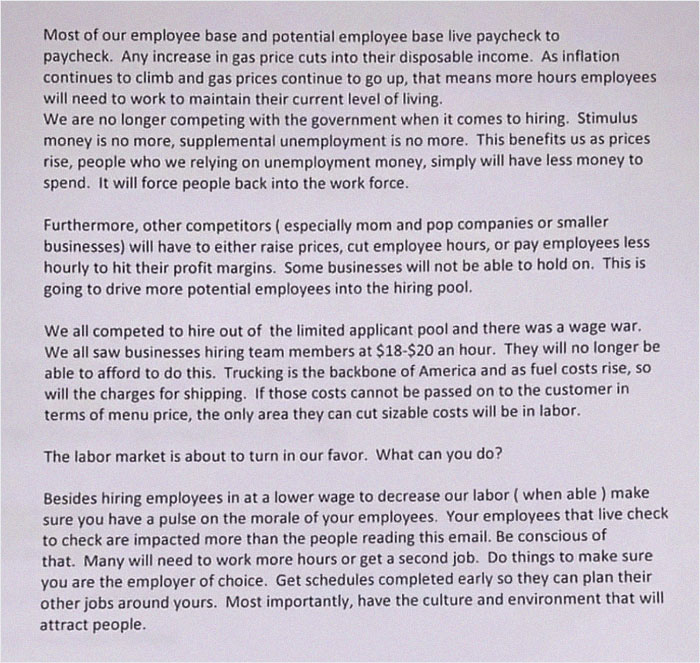 In the email, the executive points out that rising gas prices are an opportunity to exploit their employees 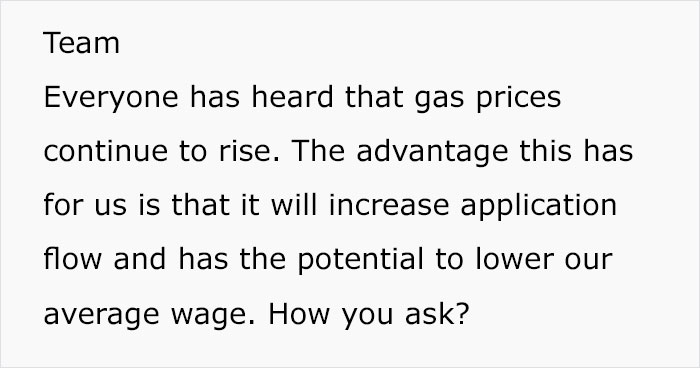 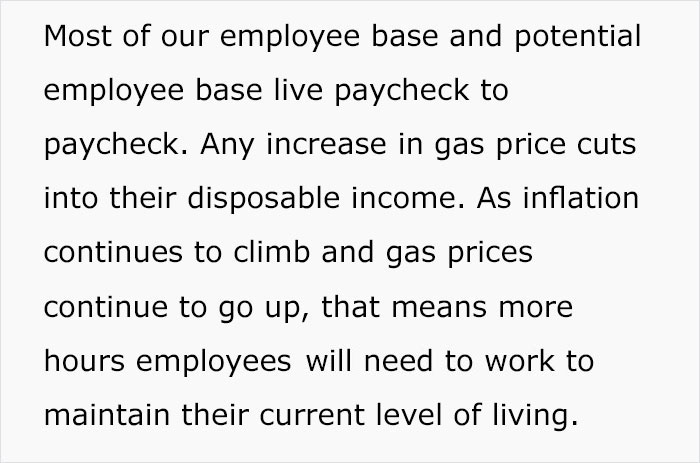 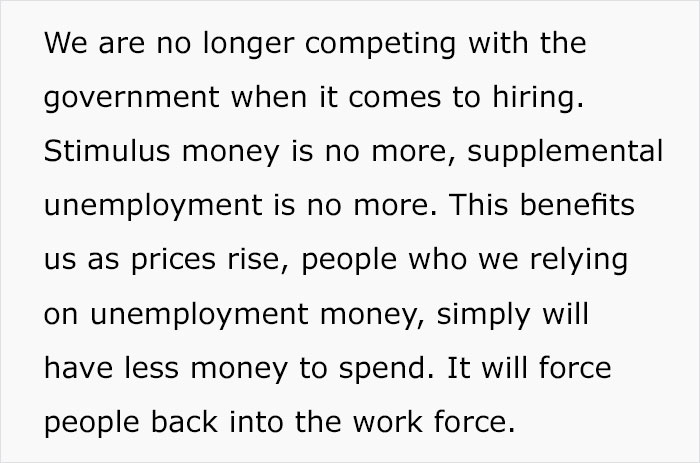 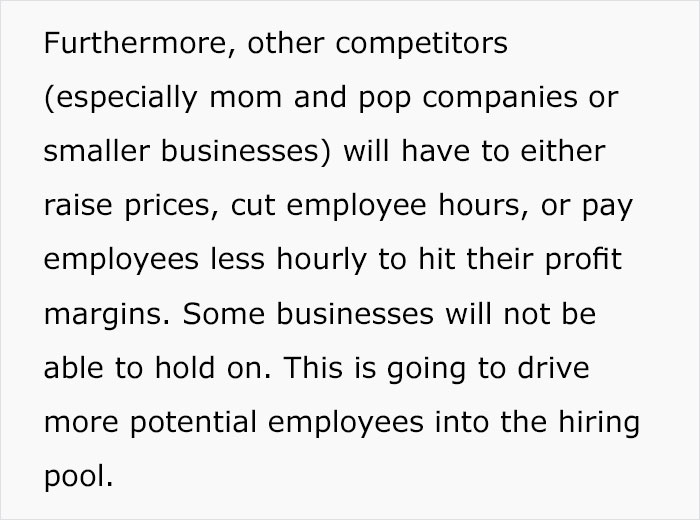 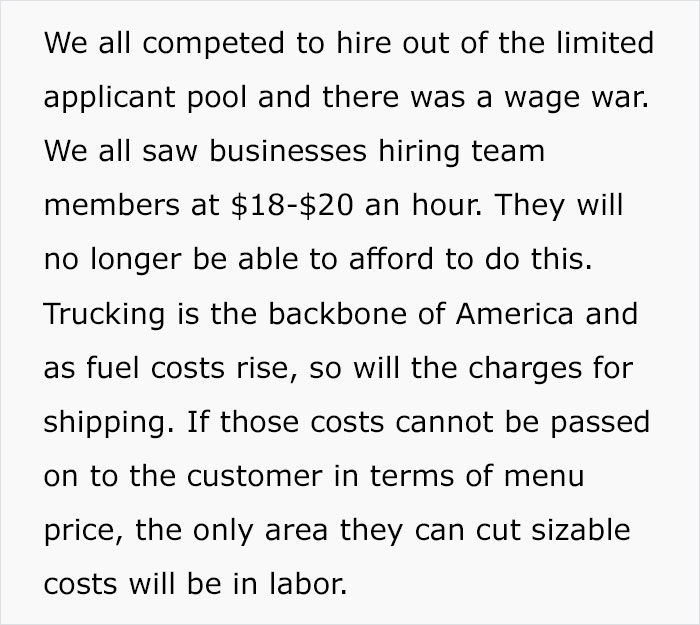 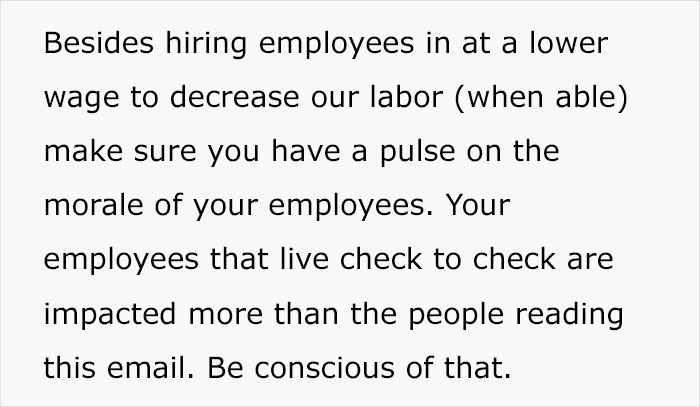 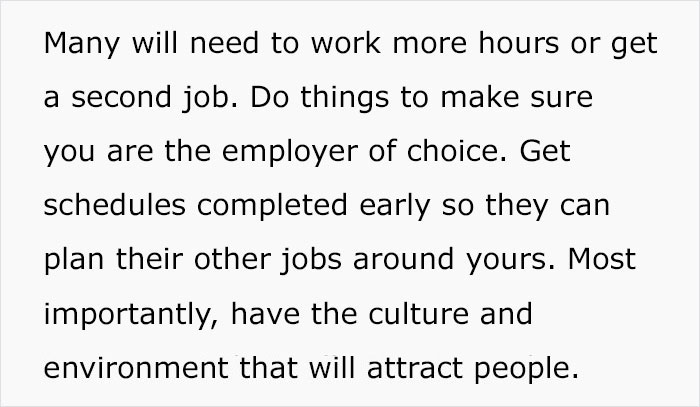 Bored Panda wanted to get u/pool_fizzle’s opinion on everyone distancing themselves from Pankratz and his views. “Liar liar pants on fire. But I guess that’s the brilliance of the franchisee system itself, you get a little legal wiggle room, you can put distance between corporate and any individual franchise,” the redditor told us that they personally don’t believe that Applebee’s is genuine in how they denounced the AFC executive.

“Truth is, there isn’t an Applebee’s on this planet that pays their employees well or treats them much better than we saw AFC treats them. I am comfortable saying so because I’ve worked in enough restaurants to see how certain traits are shared by most employers. Those traits being a general disdain for staff. It’s very common in the restaurant/retail industry for employee complaints to be met with, ‘If you don’t like it, get a better job.’ I don’t know how often I’ve heard that, but it’s too many,” they opened up about their experience in the food service and retail industry.

They believe that unionizing is the only way forward if employees (at Applebee’s or anywhere else in the US) want proper working conditions and fair wages.

“Unionize!! Unionize!! Unionize!! Unions are the working class’ only weapon against the apathy and indifference with which we are often treated. Remember, it’s against federal law for an employee to retaliate against employees for discussing wages or unions. Educate yourselves and your coworkers. Stand together in solidarity. United we are strong, divided we are weak,” u/pool_fizzle stressed that only unity between employees leads to improvements for everyone.

“Some of us are trying to get people on board with a general strike on May 1st. The whole country should stand up regarding stagnating wages in the face of rising inflation and record corporate profits (also known as corporate price-gouging). In other words, the powers that be are stretching us thin and don’t seem to care. Let’s shut down the economy for even one day, then maybe they will start to care a little more. Please go to MayDayStrike.org for more info,” they urged Americans everywhere to consider going on strike.

The fallout was widespread

The leaked email sent shockwaves both in the digital and physical worlds. People on Reddit and social media were quick to boycott Applebee’s while the media picked up the story.

There were, actually, two leaks of the same email. The first leak was internal and made 3 out of 6 managers at one of the Applebee’s in Lawrence, Kansas quit in protest, according to the Lawrence Journal-World. That particular restaurant was closed on Tuesday but had reopened on Wednesday.

Meanwhile, the second leak was far more public—it happened on Reddit and was posted, among others, by user u/pool_fizzle on the r/antiwork subreddit. This helped spread the news worldwide.

According to The Kansas City Star, AFC, where Pankrtaz works, is based in Atlanta (Georgia) and also has offices in Kansas City. AFC owns over 100 Applebee’s and Taco Bell restaurants in the Midwest US. Specifically, 49 Applebee’s restaurants and 72 Taco Bells. Pankratz, who is employed by AFC and Apple Central LLC, had his views quickly denounced.

Everyone tried to distance themselves from Pankratz

Scott Fischer, a spokesperson for Apple Central LLC (or AFC, depending on which reliable source you’re reading), which owns the franchise, told The Kansas City Star, that Pankratz’s views in no way reflected what the company stands for.

“He doesn’t have the authority to create policy for our company for the brand or anything. Maybe he wrote it in the middle of the night. I don’t know. The main message here is that this in absolutely no way, shape, or form speaks to our policies or our culture, or anything like that with our brand,” Fischer said.

“It is embarrassing. It really is,” Fischer said. “Our team is our backbone. We are nothing without the people who work for us and that are on our team. Even the thought that anything would be communicated that does anything other than put them on a pedestal and let them know they are the single most important component of our business is disheartening and frustrating.”

However, not everyone is quick to believe these words. Jake Holcomb, one of the managers who quit at the Applebee’s in Lawrence and who had circulated the email to employees, said that the company’s perspective on their employees closely matches what was said in the email.

“The fact that people are going to be forced to take a second job, and since they basically have no choice we should go ahead and pay them lower wages really bothered me,” Holcomb told the Lawrence Journal-World.

The internet was shocked by the executive’s comments. Here’s what they had to say about everything 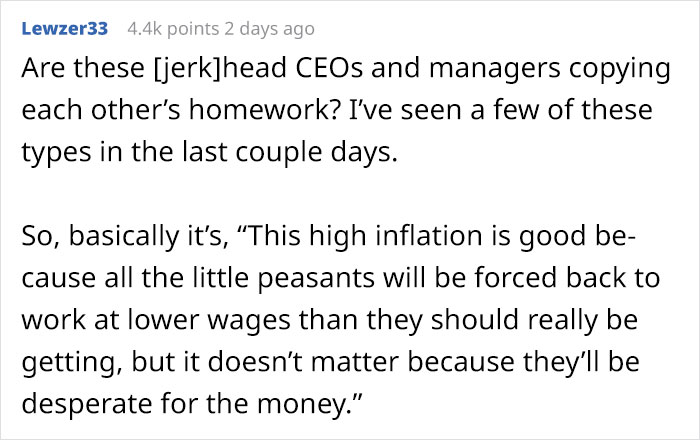 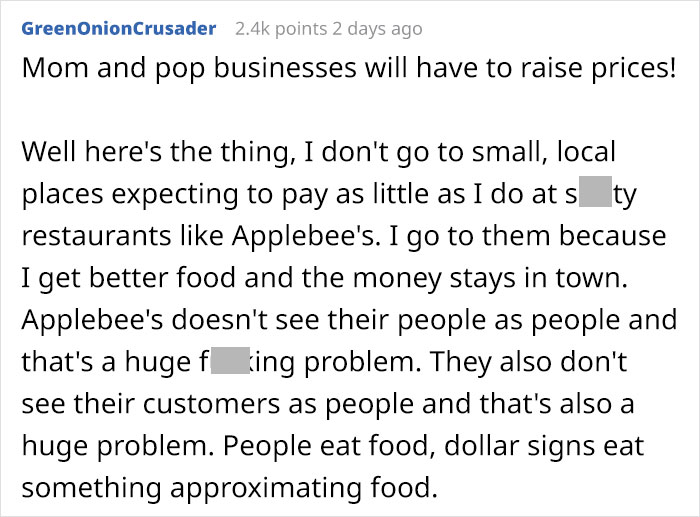 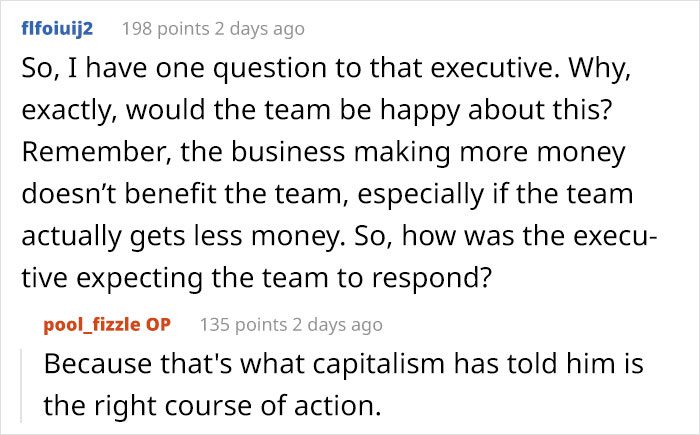 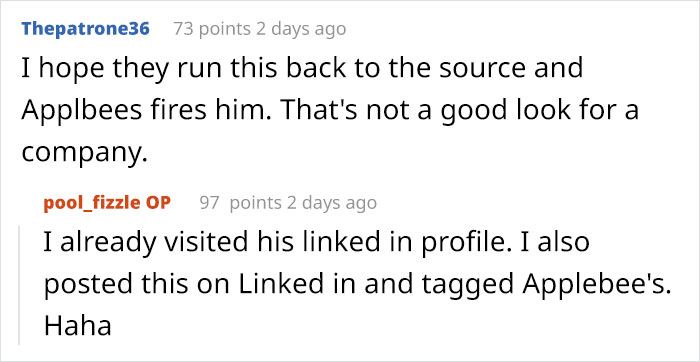 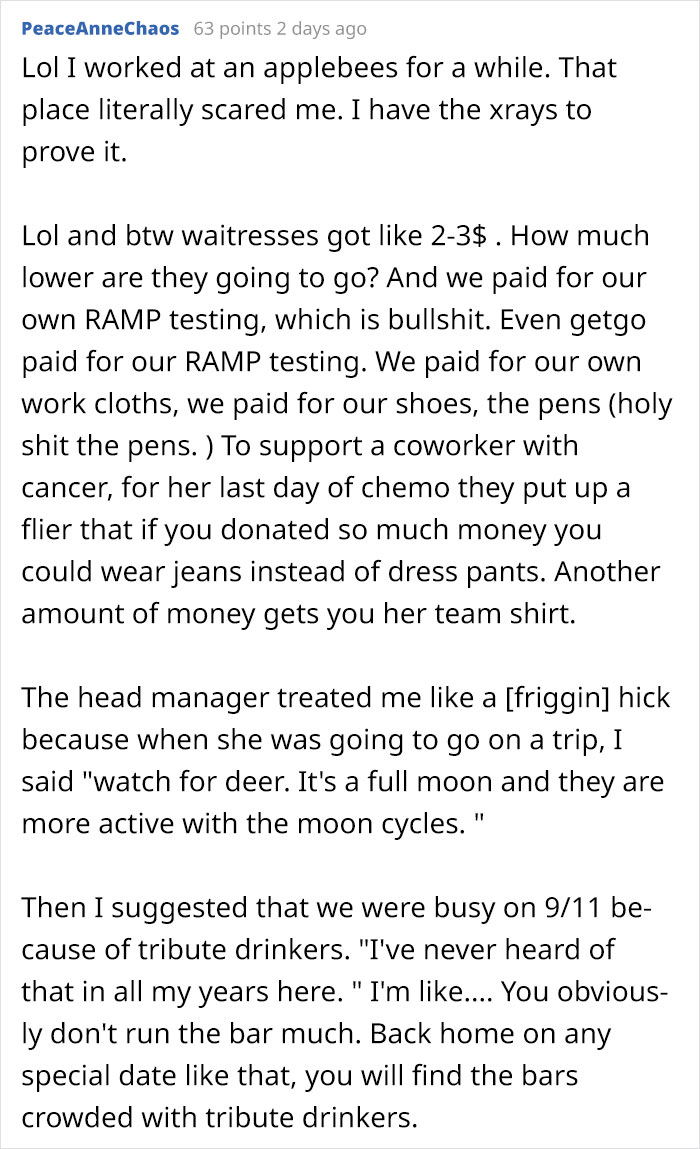 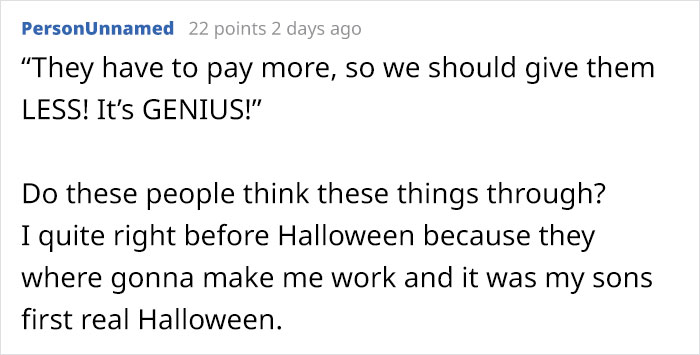 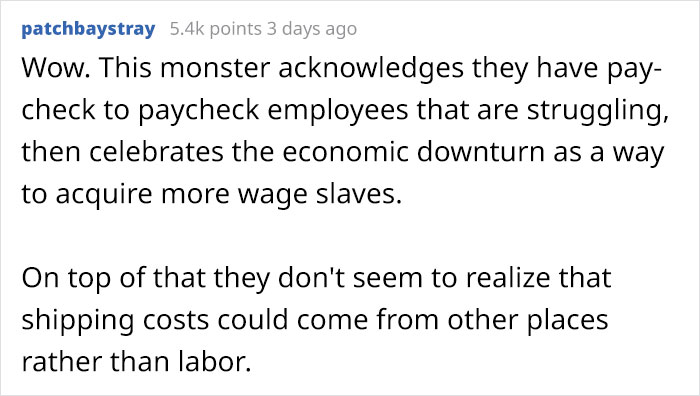