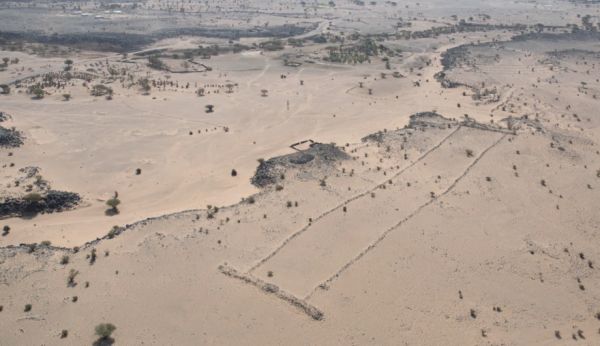 In a region of northwestern Saudi Arabia called AlUla, anything ancient civilizations left behind is pretty much still there. With no water, no vegetation, little sand, and no archaeologists until recently, artifacts and structures don’t end up buried or hidden. Exploration has revealed the existence of a culture here dating back to the Neolithic period, 7000 years ago. What’s more, they built 1600 huge rectangles of stone walls, called mustatil, that are best seen from above. Scientists believe they have something to do with an ancient religion.

Thomas, McMahon and their teams have since unearthed evidence that suggests cultic practice. They’ve uncovered large numbers of cattle, goat and wild gazelle skulls and horns in small chambers in the heads of the mustatil, but found no indication that these were kept for domestic use. Since no other animal’s body parts were found, it led the team to deduce that these were sacrificial. It further suggested that the animals were sacrificed elsewhere. This is important because it is evidence of a highly organised, cultic society, much earlier than was previously thought – predating Islam in the region by 6,000 years.

Read what we know about this ancient civilization so far, and see more of the mustatil, at BBC Travel.  -via Damn Interesting