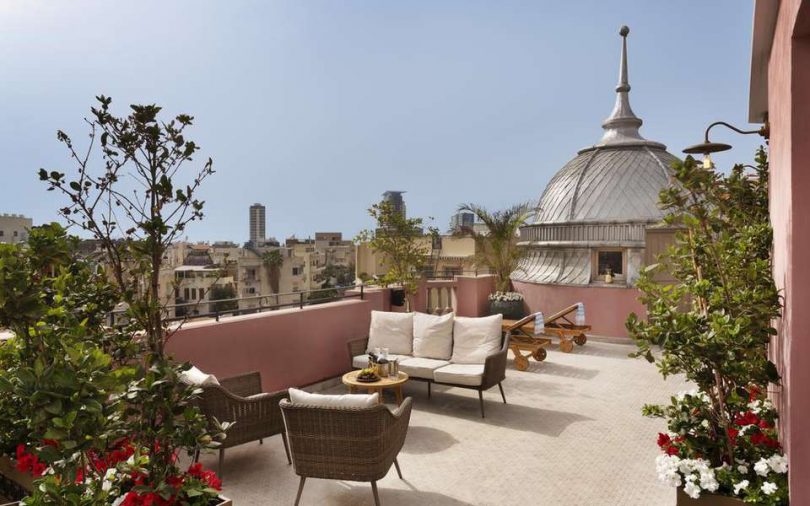 It’s hard to miss Hotel Nordoy: a regal establishment with a dusky pink art deco facade topped off with a stunning silver dome that—at sunset—turns aglow with the rays of the sun.

The hotel has become a landmark in Tel Aviv’s bustling district of Nachlat Binyamin. Built in 1925 by by Yehuda Megidovich, Tel Aviv’s first city engineer, it is the oldest active hotel in the city. The building had seen some years, so Ben Braverman, the man behind the quirky and colorful Hotel CUCU, took over this historic icon and initiated the restoration into a minimal, modern pad. 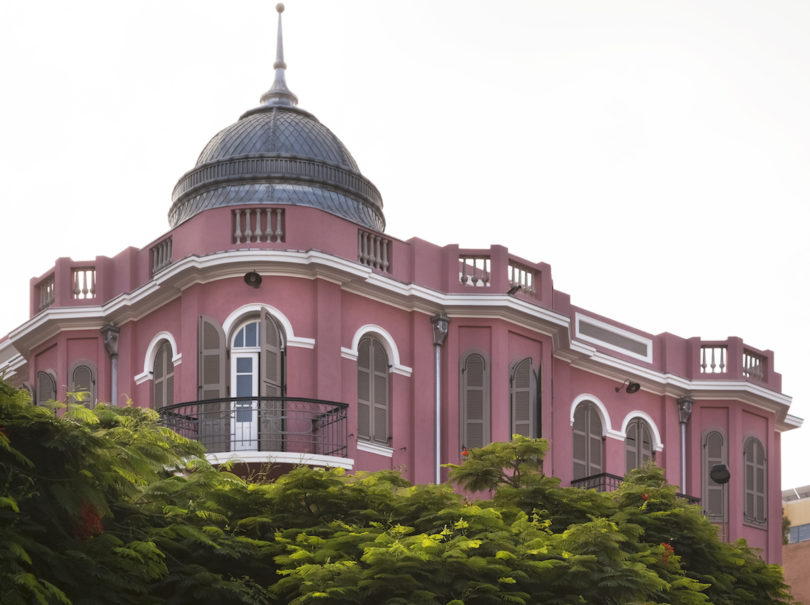 Nordoy straddles both East and West; old and modern world charms. The main stairwell and arched windows—features of the building’s original glory—were retained, as was the same shade of pink that Megidovich chose to glaze the exterior walls with close to 100 years ago. 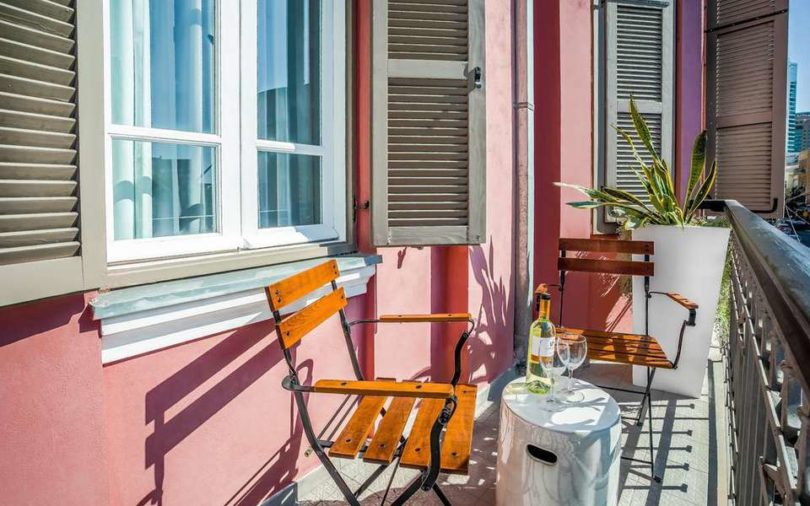 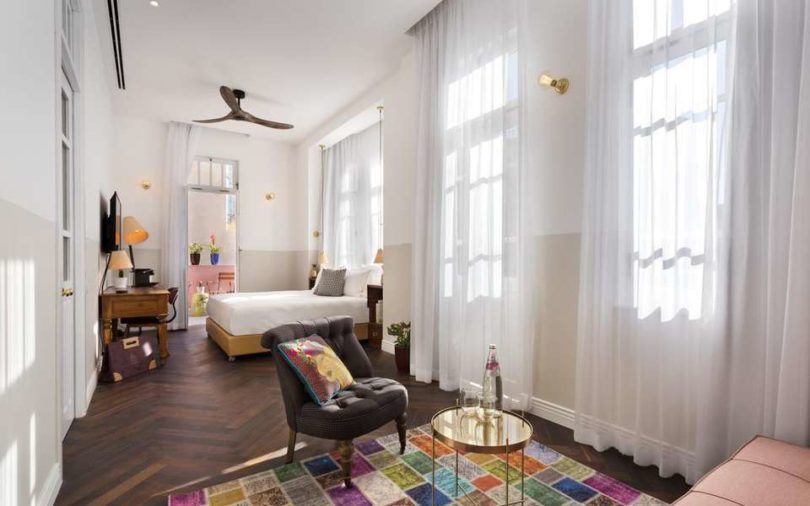 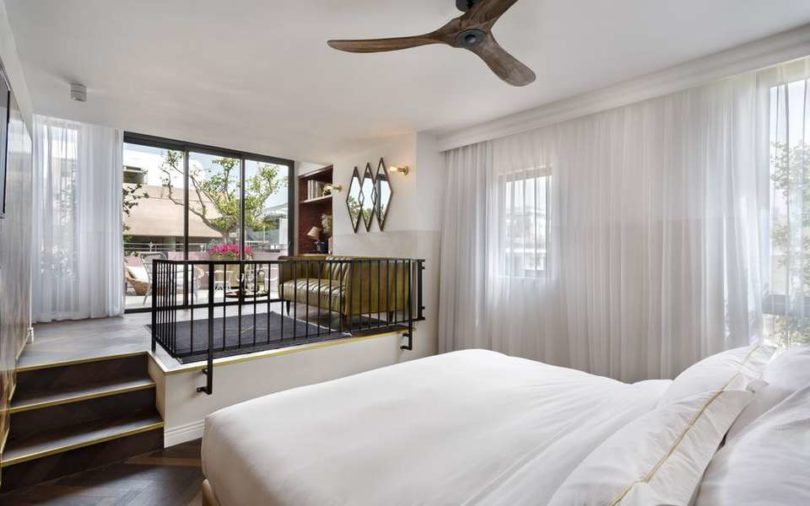 The interiors also display the hotel’s age and careful balance of color. A cozy palette of brown, pink and sand reflect the desertous landscape in Israel, while the gold, marble and leather accents are subtle hints of luxury in a blossoming city. 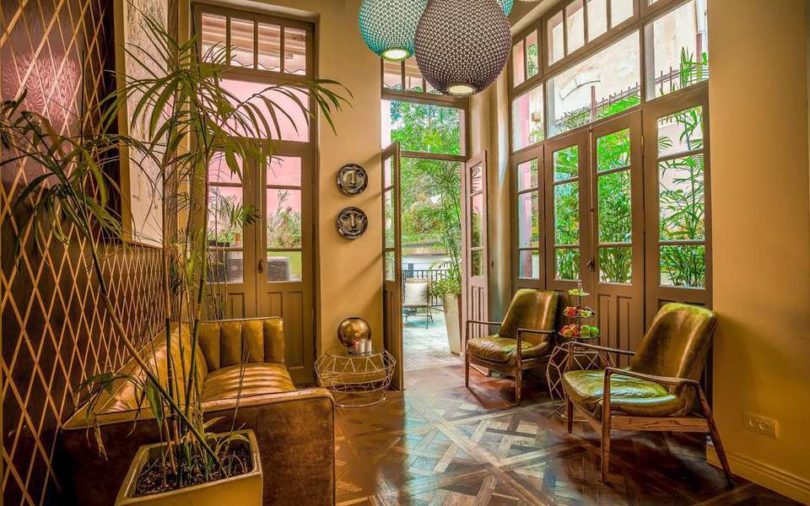 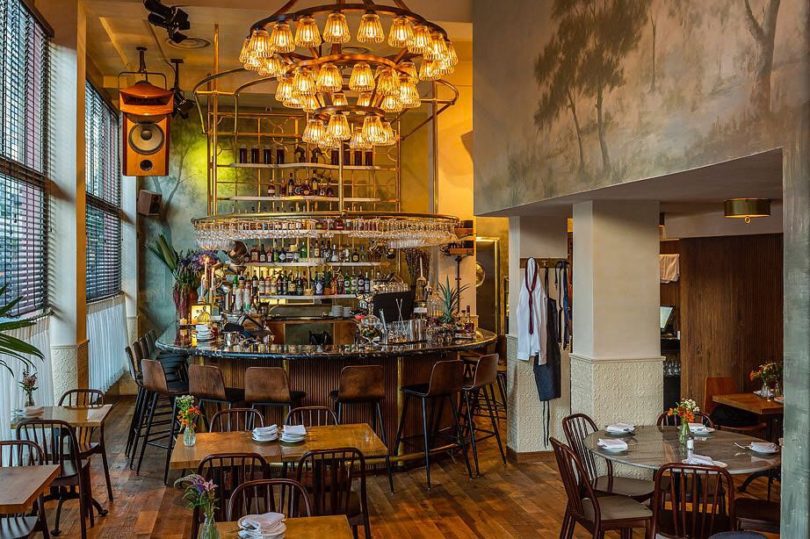 In the morning, you can expect a warm made-to-order breakfast at the hotel’s ground floor cafe. The bar is adorned in a muted gold that harkens back to the colonial influences in the early 90s. The luminous floor-to-ceiling windows lend to the feel of a European cafe; yet the colorful ornamentation is distinctly Arabesque. 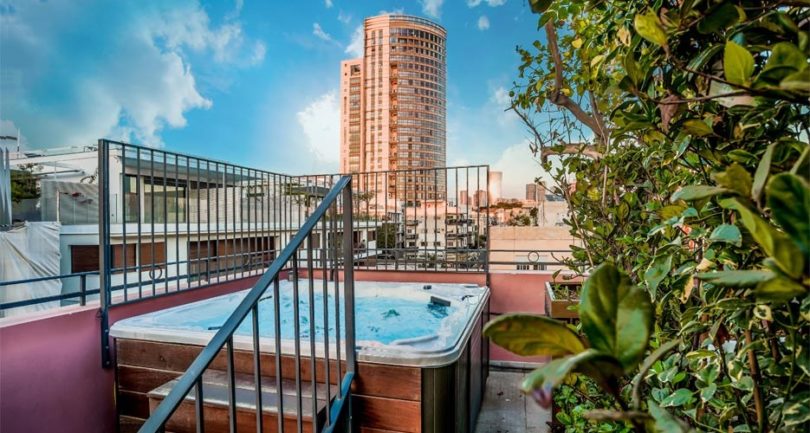 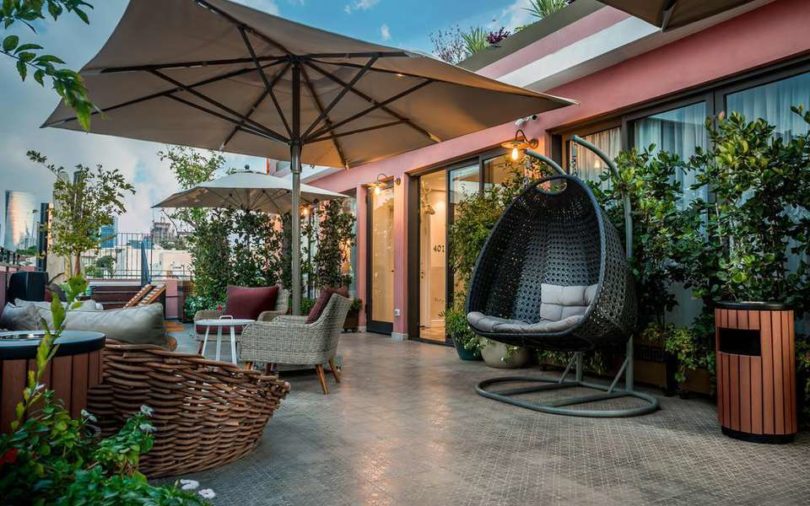 The hotel has a rooftop jacuzzi with views of Tel Aviv’s modern high rises, as well as some of the more haphazard developments that are signature in this burgeoning cityscape. I remember a lively party had taken place, almost impromptu, on an empty rooftop opposite the hotel. There was dancing, drinks were poured, and melodies traveled in hoppy waves over to where I was, on the deck chair, observing the last rays of the sun imitate the shade of the hotel’s facade. 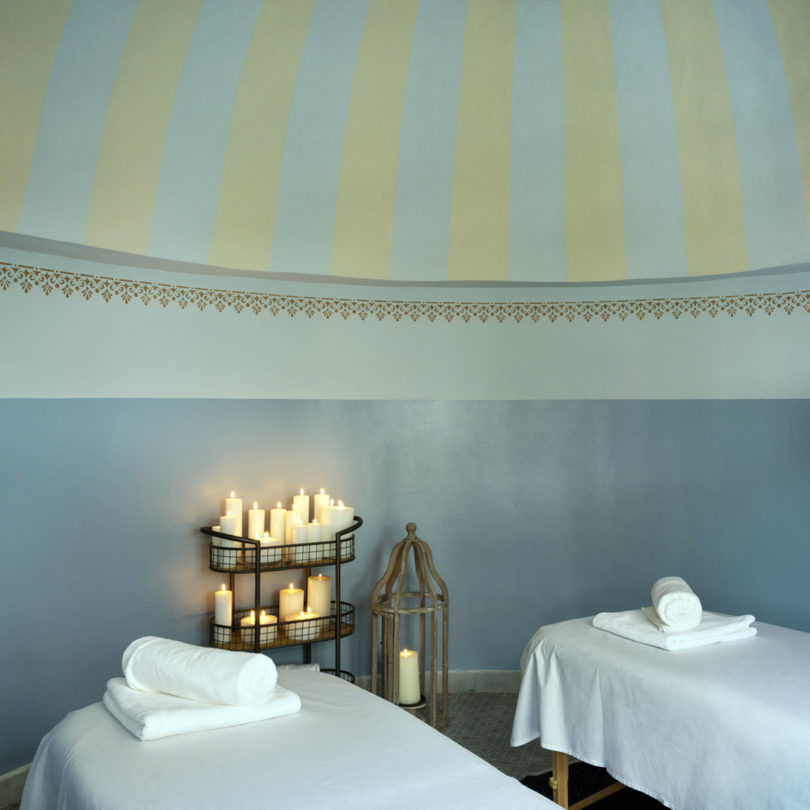 The rooftop also features an intimate tent that doubles as a private space for spas and massages.

Nordoy lights up the intersection of Gruzenberg and Nahalat Binyamin and rubs shoulders with the Nachlat Binyamin Arts and Crafts Fair across the road, where you’ll find local makers peddling their handmade products.

The hotel is also walking distance to the beach and the main thoroughfare of Tel Aviv, Allenby Street. For a quieter and more intimate dining experience, I chose to visit Carmel Market—a covered street market where vendors dish out casual eats.

Whether you’re looking for an understated and calm local experience, or a luxurious spa hotel, Nordoy has one foot in both. When you’re on the roof, watching skyscrapers glisten on your right and people dancing on a barebones unfinished building to your left, it seems like you can—for a moment—feel the heartbeat of Tel Aviv as it moderates a complex past and an optimistic present, and be a part of this liminal moment as well. 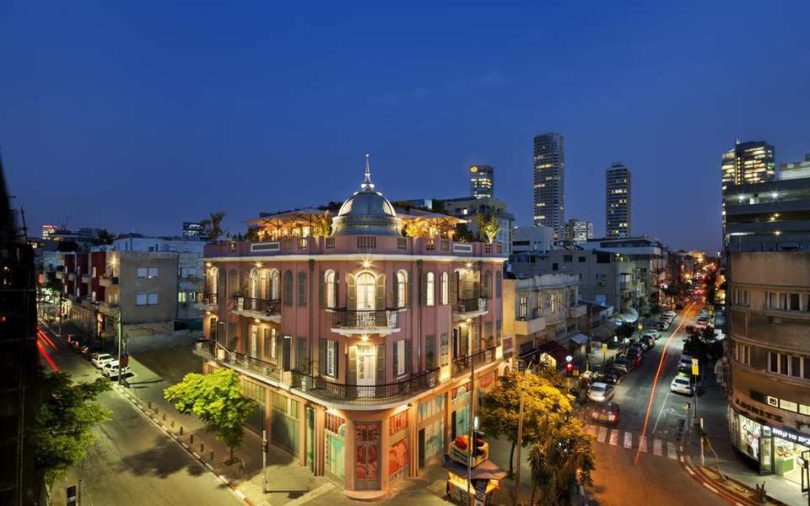 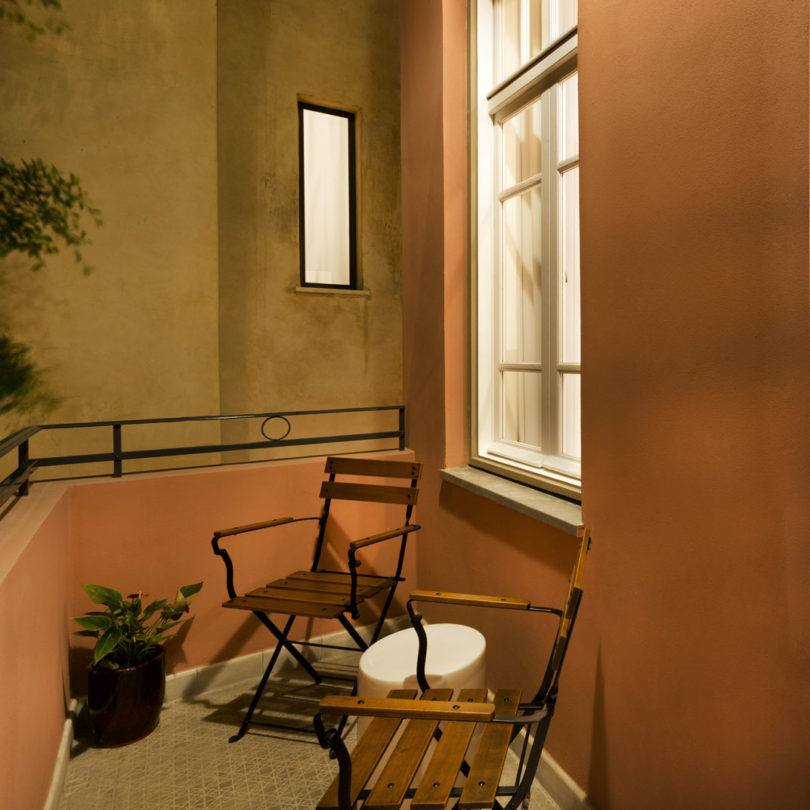 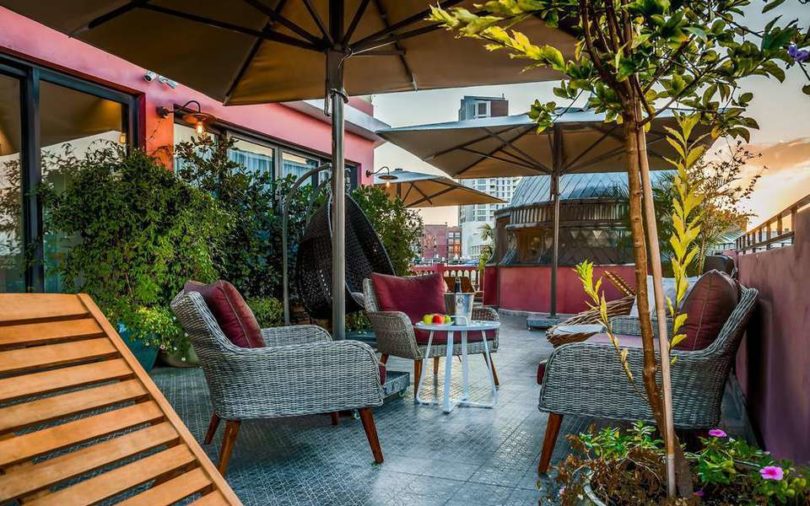 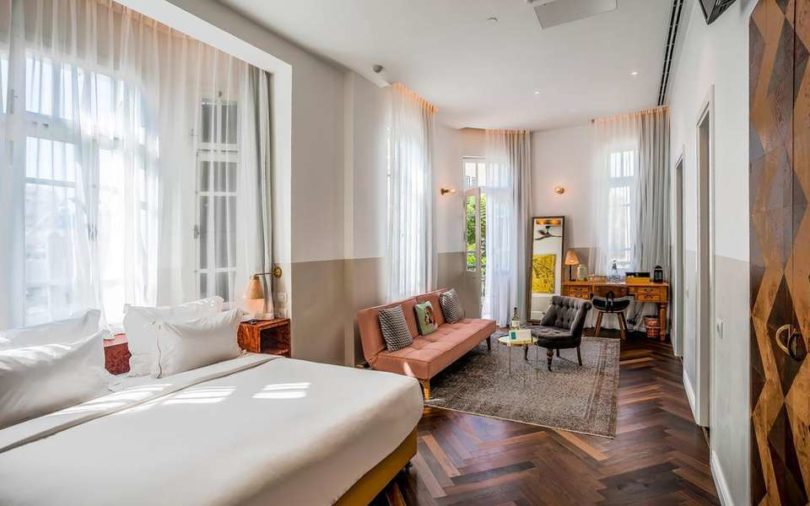 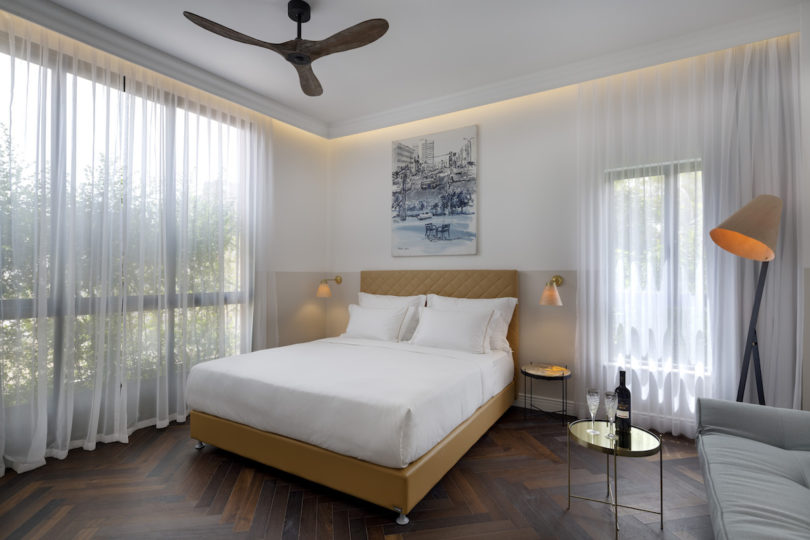 What: Hotel Nordoy
Where: 27 Nahalat Binyamin St. Tel Aviv, Israel
How much? Starting from $209
Highlights: In the middle of the bustling Tel Aviv district, walking distance to the beach and Carmel Market and Allenby Street, is a regal boutique hotel with 20 delicately furnished rooms, a rooftop spa and jacuzzi, and an old-school restaurant. In dining and in hospitality, the hotel straddles Western and Middle Eastern influences.
Design draw: The oldest hotel in Tel Aviv features a dusky pink facade—the same shade that the hotel was glazed with close to a century ago—along with arched ceilings and a silver dome roof.
Book it: Visit Hotel Nordoy

The Smallest And Lightest Full-Frame Camera Ever Made

How Can We Protect Photos We Posted Online?

This Girl Wanted A Hamster So Bad