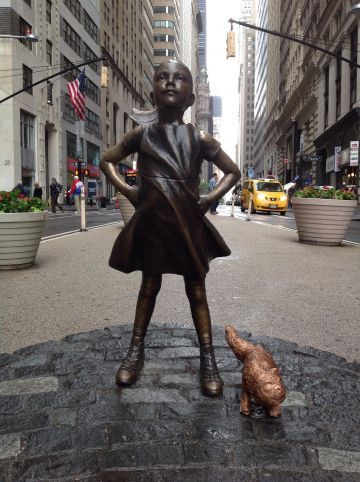 Remember when the creator of the Wall Street bull threatened to sue the city of New York and the creators of the Fearles Girl statue because he thought it made his artwork look bad? Well today artist Alex Gardega made a strong point about how one artwork can affect another by installing a peeing dog statue beside the Fearless Girl.

Unsurprisingly, critics complained that his work was sexist, but Gardega defended his work as a critique of the corporate sponsor that was responsible for putting up the Fearless Girl statue (yes, she wasn’t made by a pro-woman artist, but as an advertisement by Wall Street corporation State Street).

“I decided to build this dog and make it crappy to downgrade the statue, exactly how the girl is a downgrade on the bull,” he added.

Gardega took down the statue less than a day after putting it up, noting that he didn’t even bolt it to the ground and that viewers damaged the dog’s leg. He says he intends to put it back up after repairing it and that he eventually plans to sell it on his website for $10.