“I think a lot of people have lost confidence in the recycling system,” Emily Packer says. “I often hear people say things like, ‘It probably just ends up in a landfill anyway.'”

The British/American videographer was disheartened to discover that as little as 9 percent of all plastics actually get recycled in America, and to see the pileup of waste in her adopted hometown of Kigali, Rwanda. “Plastic is one of the most durable materials in the world,” says Packer, “and yet we’re using it for throwaway items—it makes no sense. Rather than just saying ‘plastic is bad,’ we need to reshape our entire relationship with plastic, and begin using it in a different way.”

One alternative use she’s landed on, with her cofounder Jake Calhoun, is Coldharbour Tiles, live on Kickstarter now. They melt down Rwanda’s waste plastic into durable, stylish home decor supplies, and guide backers through some simple ways to use them. The team hopes that as they expand their facilities to ramp up production, they’ll soon be able to upcycle as much as two tons of otherwise landfill-bound plastic every day. 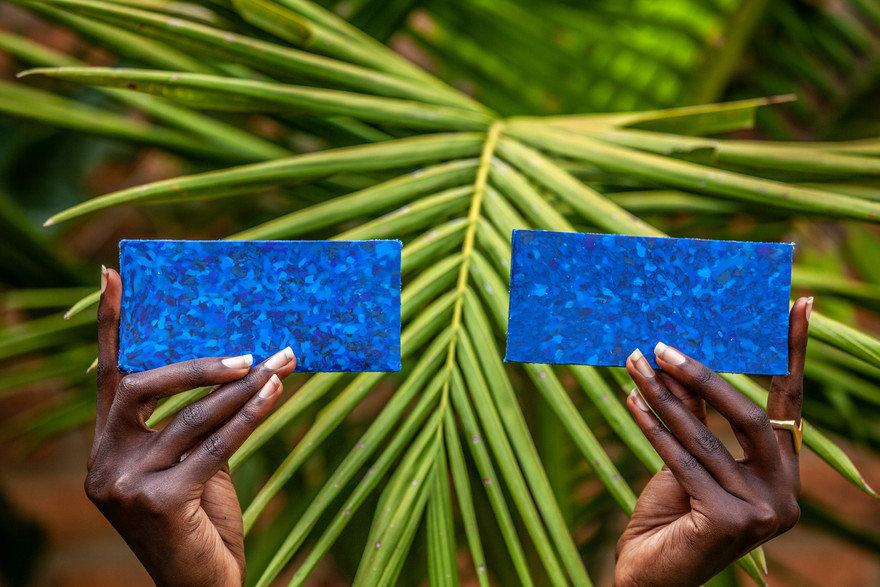 Coldharbour Tiles are made with the equivalent of dozens of bottlecaps.

After an internship with the United Nations Environmental Program opened her eyes to the power of environmental documentaries, Packer started traveling the world making her own. She interviewed more than 200 people in 23 countries about global environmental solutions.

The work also brought her face to face with the realities of recycling. “Traveling on assignment to developing countries, I saw that the lack of good waste management systems meant that trash wasn’t hidden away like it is in Europe and the U.S.,” she says. “It’s right in front of you—in the streets, in the water, on the coast, everywhere. I was guilty of being one of those people who never gave a second thought to trash once it was thrown ‘away,’ but travel opened my eyes to how big the problem is, and [the fact] that ‘away’ really means oceans, landfills, or other countries.”

When she moved to Rwanda with her family, she felt motivated to shift her focus from storytelling to making a tangible, local impact.

She opened a café that focused on environmental issues and tried to eliminate plastic waste. She produced her own biodegradable takeaway containers, made soap from scratch, and opted for bamboo instead of plastic straws, but she also saw firsthand how much plastic the average business could go through. “A lot of plastic use is just unavoidable,” she says. “I think once you become aware of the pervasiveness of single-use plastic in your life, and our reliance on it, it’s a big wake-up call.” She wanted to do more to fight what felt like avoidable waste.

This is how Coldharbour Tiles was born, she explains. “I wanted to recycle plastic waste into something that had longevity.” It takes almost 50 plastic bottle caps to create one tile; covering an entire kitchen or bathroom with them takes a sizable volume of plastic out of landfills and waterways.

Packer taps her skilled community, from a social enterprise leader to local students

Packer went to her friend Jake Calhoun, the CFO of a large social enterprise in East Africa and founder of an online food delivery company, for help building her business. He quickly became a cofounder, and the pair started talking to Kigali’s IPRC engineering school about partnering to set up a production facility for recycling plastics into reusable tiles. 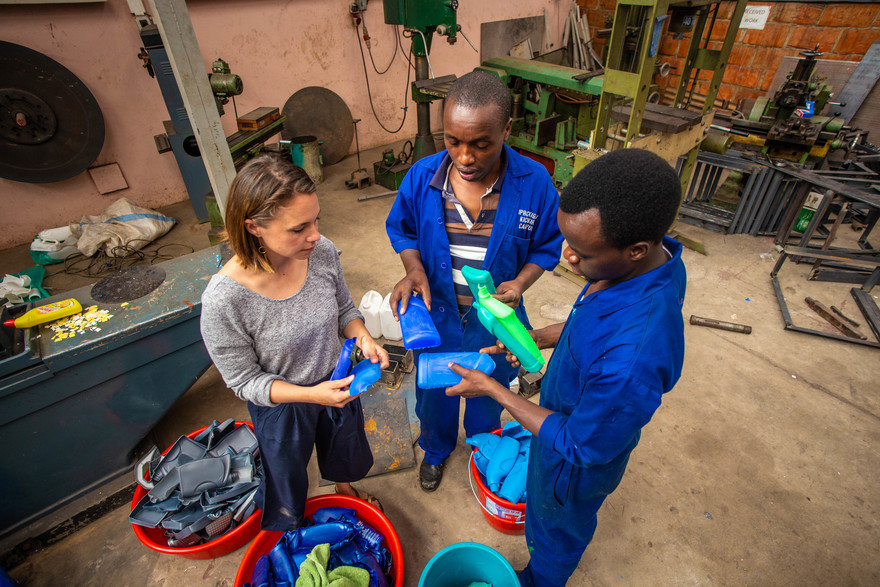 “They have a nice big warehouse where we set up our production facility,” Calhoun explains. “Two of their professors provide technical support and some of the students worked with us as part of a school project.” 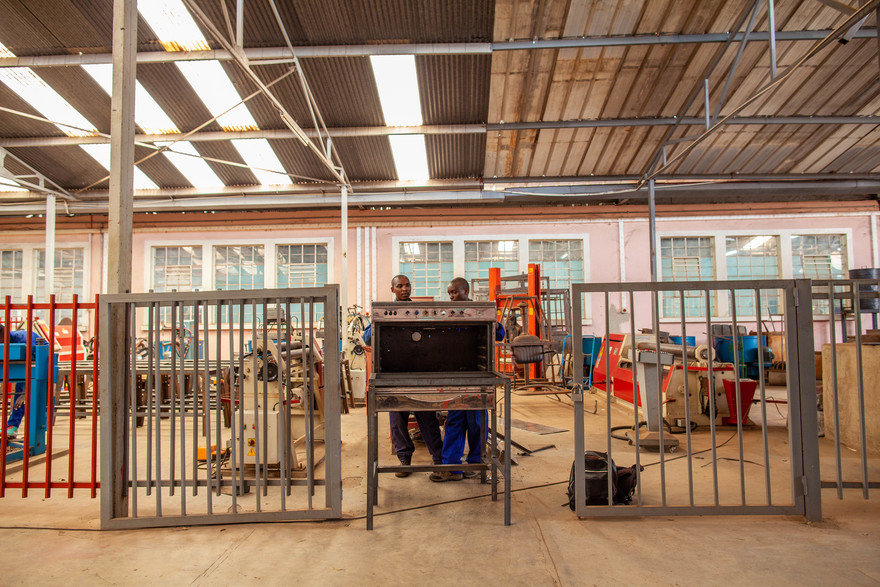 Coldharbour Tiles get a long, slow roast at an engineering school facility in Kigali.

Still, it was a lot of work. “At the beginning, I was going to the waste management site myself, handpicking the HDPE [high-density polyethylene, used in many plastic products] we wanted to use, and driving it to the warehouse in giant garbage bags—it was one smelly ride,” Packer says. “After doing this a few times, the warehouse quickly filled up with plastic trash. It was cool to see how we could dramatically reduce the volume of plastic by transforming empty jugs and bottles into these beautiful, condensed tiles.”

Neither Packer or Calhoun had any engineering experience and their funding was limited. “We had to stay flexible and keep pivoting,” Packer says. They experimented with color combinations, temperatures, cooking times, and mold designs, eventually landing on the ones they’re offering on Kickstarter now.

Not everyone’s a designer, and that’s OK

“Luxury eco-tiles are not the kind of product you really see that often,” Calhoun concedes. “It’s not the type of thing you just get up and buy one day. So we had to get creative with the types of products we offer, like the DIY tabletop that can be used by anyone, anywhere, even if you rent an apartment and have no interest in tiling a wall.”

“We’ll be offering a free tile information brochure with every purchase to provide design ideas, DIY tips and tricks, and installation advice, allowing customers to insert their own creativity into the tiling process,” Packer adds.

Collaborating with their community has also opened their eyes to more creative uses.

“We’ve been overwhelmed by people’s reactions,” Packer says. “We have had a lot of people reaching out—from architects to interior design firms to handbag designers—asking about our tiles and sharing the different ways they plan to use them.” A popular interior designer in Kigali used the tiles when she remodeled her garage into a spare apartment, and because of her influence, the team heard from a number of other interested buyers. 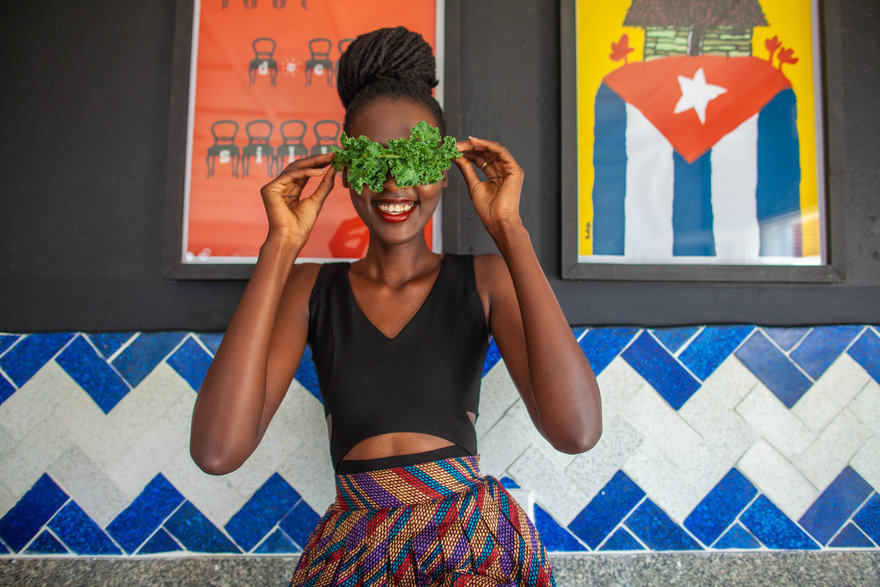 The Coldharbour Tiles team wants to help those who might not consider themselves designers feel comfortable trying some small projects at home.

But the small team is caught in a frustrating chicken-and-egg situation.”We are simply in a place at the moment where we don’t have the capacity to manufacture large-scale orders,” Packer says. Their scrappy facility in the engineering school isn’t ready to grow as fast as creatives’ interests, “and we can’t increase production until we raise enough money to upgrade our facilities,” Calhoun explains, “but raising money from traditional investors before we can really increase our sales is tough as well.”

The team hopes to up their impact with a facility remodel, and maybe even relocation

The team hopes their Kickstarter campaign will help them purchase the equipment that can scale up their production and bring more waste-clearing tiles to homes around the world. Machines like a plastic-waste washing machine and commercial shredder will allow them to get there. And the team is considering bringing their process to facilities in Europe and the U.S., too.

“The biggest challenge of being based in Rwanda is that you don’t have access to a lot of the equipment and technology that you would simply take for granted in the West,” Packer says. “This forced us to get really creative and keep trying different ways of doing things until we got it right. For example, the molds were a particular challenge at the beginning because, rather than using a laser cutter to create the shapes, we were cutting and welding everything by hand. The plastic was getting stuck inside of the molds, so we had to redesign each one in a way that allowed us to more easily pop the tile out at the end. We also weren’t able to afford stainless steel to create the physical molds, which meant that our iron molds rusted easily and we needed to thoroughly scrub them down at the beginning of each day.

“Ultimately, we would like to become the leader of the eco-tile industry, cleaning up thousands of tons of plastic waste every year,” says Packer. “By eventually opening manufacturing sites in Asia, Europe, the U.S., and Africa, we will be able to process locally while connecting with new consumers.”

Coldharbour Tiles is live on Kickstarter through April 11, 2019.