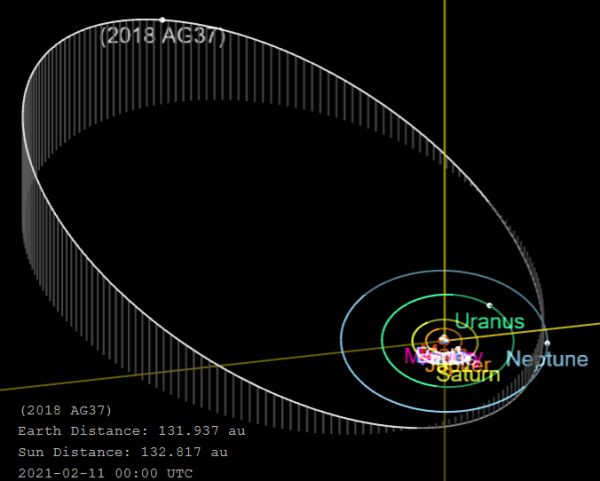 First spotted  in 2018, scientists are now learning more about an orbiting rock that is the furthest known object in our solar system. (True, Voyager 1 is further out, but it’s man-made and not in orbit) This rock is so far out of the neighborhood that it’s been nicknamed FarFarOut.

It’s about 400 kilometres (250 miles) across, which is on the low end of the dwarf planet scale, and initial observations suggest it has an average orbital distance of 101 astronomical units – that’s 101 times the distance between Earth and the Sun.

Since Pluto has an average orbital distance of around 39 astronomical units, FarFarOut is very, well, far out indeed. It has been given the provisional designation 2018 AG37, and its proper name, in accordance with International Astronomical Union guidelines, is still pending.

That orbit, however, isn’t an even circle around the Sun, but a really lopsided oval. After careful observation, scientists have calculated its orbit; FarFarOut swings out as far as 175 astronomical units, and comes in as close as 27 astronomical units, inside the orbit of Neptune.

So, FarFarOut is only the most distant object in the solar system part of the time. That’s one weird rock. Read more about FarFarOut, including how it got that name, at ScienceAlert. -via Damn Interesting