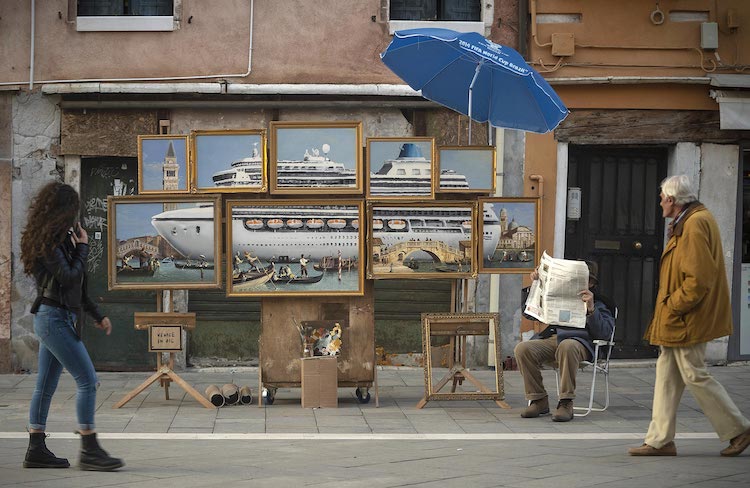 The Venice Biennale is in full swing and one of the world’s most iconic artists made sure he was in the mix, invited or not. Famously mysterious street artist Banksy took to his Instagram—where he’s been releasing official images of his work—and let his presence in the lagoon be known. And in typical Banksy fashion, the results are both amusing and thought-provoking.

“Despite being the largest and most prestigious art event in the world, for some reason I’ve never been invited,” he wrote on Instagram. So, as shown in a short video, he set up his own display on the sidewalk among other artists and souvenir vendors. His selection of “Venice in Oil” paintings seem to fit right into the romantic vision of Venice—that is, until one takes a closer look.

Just as with most things Banksy, there’s a twist. The street artist’s view of the lagoon is much more realistic than many would like to believe, showing an enormous cruise ship docked right alongside the boardwalk of St. Mark’s Square. The painting would be funny if it weren’t true. As a city based on tourism, Venice has long had a battle with cruise ships.

The city has been warring with cruise ship companies for years over their desire to park their largest boats in the historic center. While this might make it easier for tourists to swarm the city, it’s extremely damaging to the environment. Local organization We Are Here Venice has been leading an awareness campaign about the damage these ships cause and supported a 2017 referendum to ban large cruise ships that won overwhelming support from voters.

While the city has announced legislation that keeps the largest ships at docks further afield, it will take several years for the laws to go into action. This makes Banksy’s work all the more important, as his installation is sure to bring new attention to the issue.

Unfortunately for Banksy, his stall was short lived. Authorities quickly came to check his permits and asked him to move along, none the wiser that they’d just participated in his latest stunt.

Banksy has never been invited to the Venice Biennale, so he took matters into his own hands and set up a stand anyway.

All images via Banksy.

Banksy Painting Immediately Self-Destructs After Being Sold at Auction for Over $1.3 Million

Banksy Opens Hotel in Bethlehem Within Site of Separation Barrier

The post Banksy Sets Up Unauthorized Stand in Venice to Show His Latest Paintings appeared first on My Modern Met.