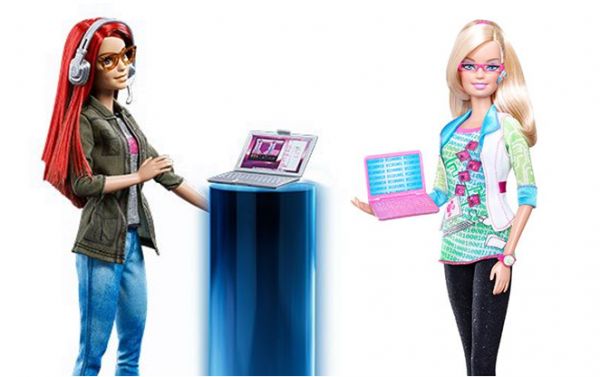 For the last ten years, Mattel has released an annual Barbie Career of the Year doll (with the exception of 2017). Recently, the 2021 career was announced to be a music producer. Barbie dolls and their careers have come a long way since she was purely a fashion model in the 1950s and ’60s, and Barbie as a professional long precedes the Career of the Year line. While there have been numerous astronaut Barbies, more recent iterations are tech and business related, with a spate of political Barbies, too, in the last few years. Ada Palmer takes us through the history of the professional Barbie as a marketing tool that reflects our evolving culture.

So, what does the Career of the Year sequence show us about Barbie as a mark of centrist feminism? A few things. One is that women-in-tech is definitely a thing, far more in the minds of the organizers than women-in-STEM, since we haven’t seen biologist Barbie or epidemiologist Barbie showcased, only several iterations of tech Barbies, including software and hardware. It also shows through things like entrepreneur Barbie and architect Barbie that sometimes they look a lot at research, especially about income and what are high-paying careers, and think it’s important that Barbie encourage girls to go into high-paid professions not just exciting ones (beloved-yet-underpaid careers like teacher and nurse have been frequent Barbie careers but not showcase ones).  They also sometimes run into challenges in communication, i.e. ‘entrepeneur’ is a very important concept but very difficult to communicate in a doll via clothing and accessories, as is true of many careers.

Palmer gives us a review of each Barbie in the series, as well as a look back at previous professions, at Ex Urb. -via Metafilter

Exploring Dutch Design Week 2021: The 6 Events You Need to See