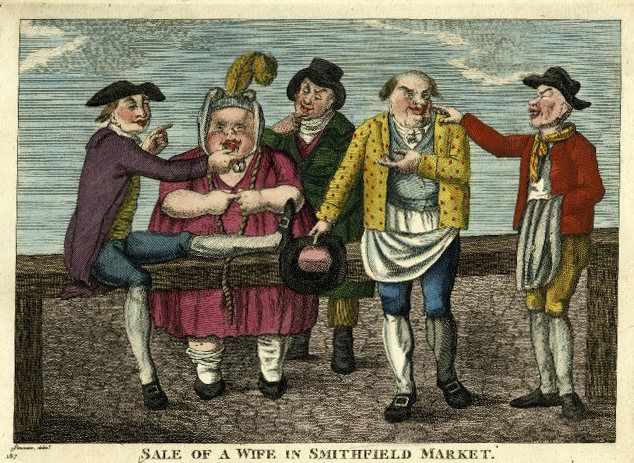 When your relationship has gone sour, we have a convenient legal device that provides for couples to go on their separate ways. That’s divorce. However, a couple of centuries ago, divorce was illegal in different parts of the world, including England. Since couples had no way of splitting up without being chastised for it, they had to resort to other measures. Instead of going through a divorce procedure, men sold their wives for beer.

This wasn’t an unusual scene. Throughout the 18th and 19th centuries, English wives were “sold” for a variety of payments. Prices varied—“as low as a bullpup and a quarter of rum” all the way to “forty [British] pounds and a supper,” the North-Eastern Daily Gazette reported in 1887.

Half a gallon was the total sale price for a 26-year-old known as Mrs. Wells, purchased by a Mr. Clayton in 1876, as reported by The Sheffield Daily Telegraph. Clayton approached Mr. Wells, professed his love for the man’s wife, and asked if he could marry her. Wells shrugged—for the last two years, his wife had lived with Clayton, and he didn’t care what she did anymore. He told Clayton he could have her “for nowt” (or “nothing”), but Clayton insisted he name his price—he did not want her “so cheaply.” Wells countered with a half-gallon (four pints) of beer, and the three of them went off to the pub. After buying Wells his beer, Clayton also offered to adopt the Wells’s daughter—Mrs. Wells was rather attached to her—and when Mr. Wells accepted, Clayton bought him another pint. Mrs. Wells was so pleased with the arrangement that she purchased an additional half gallon of beer, which the three drank together.