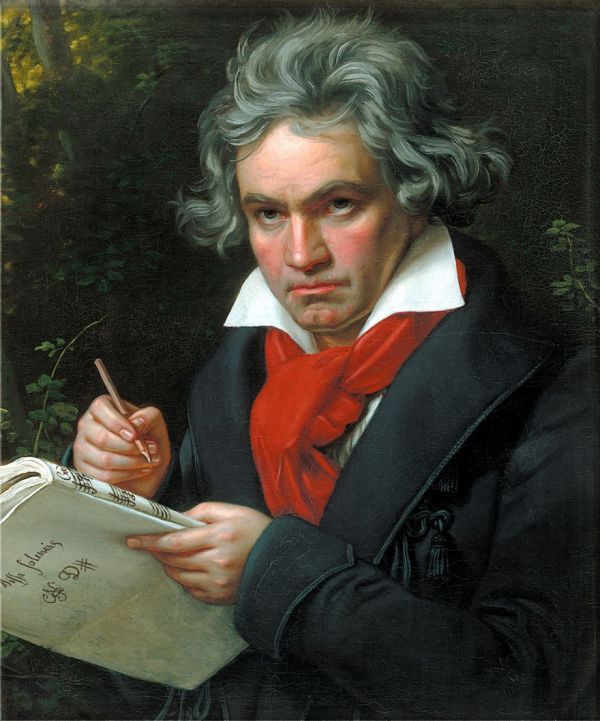 One of the first things that students learn about Ludwig von Beethoven is that he went deaf and continued composing, using his memory of what each note sounded like. However, Beethoven began to gradually lose his hearing almost thirty years before his death, and took steps to protect himself from further loss. He carried “conversation books,” in which people could jot down their side of a chat, and he also used them for notes to himself. According to Kent State musicologist Theodore Albrecht, his entries indicate that he could still hear a little when his Ninth Symphony premiered in 1824, and for a couple of years afterward.

One account, dated 1823, tells of the composer visiting his favourite coffee house, where he was approached by a stranger seeking guidance on his own failing hearing. Beethoven scribbled down this advice: “Baths [and] country air could improve many things. Just do not use mechanical devices [ear trumpets] too early; by abstaining from using them, I have fairly preserved my left ear in this way.”

He added: “When possible, [conversing] through writing is better; the hearing will be spared.” In another account, from 1824, a musician visits Beethoven and tells him: “You can already conduct the overture entirely alone … Conducting the whole concert would strain your hearing too much; therefore, I would advise you not to do so.”

Read what else Albrecht learned from Beethoven’s notes at the Guardian. -via Damn Interesting

Taste the Rainbow with United Sodas of America