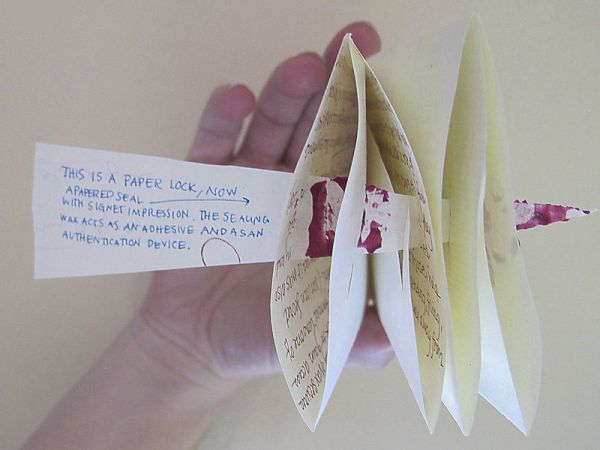 Imagine you lived in the era between the rise of paper correspondence (13th century) and the invention of the paper envelope (16th century). If you needed to send an important letter, how would you ensure that no one else besides the intended recipient read it along the way? With a system of various folds, slits, and wax seals. MIT conservator Jana Dambrogio studies the methods she dubbed “letterlocking.”

To seal a modern-day envelope (on the off chance you’re sealing an envelope at all), it takes a lick or two, at most. Not so for Mary or for Machiavelli. In those days, letters were folded in such a way that they served as their own envelope. Depending on your desired level of security, you might opt for the simple, triangular fold and tuck; if you were particularly ambitious, you might attempt the dagger-trap, a heavily booby-trapped technique disguised as another, less secure, type of lock.

While the letters could be opened, such interference would always leave behind evidence of tampering. Dambrogio teamed up with Daniel Starza Smith of King’s College to form the Unlocking History research team, in which they reverse-engineer historic letters to study how the letterlocks were made and the cultural history behind those methods. Read about letterlocking at Atlas Obscura.