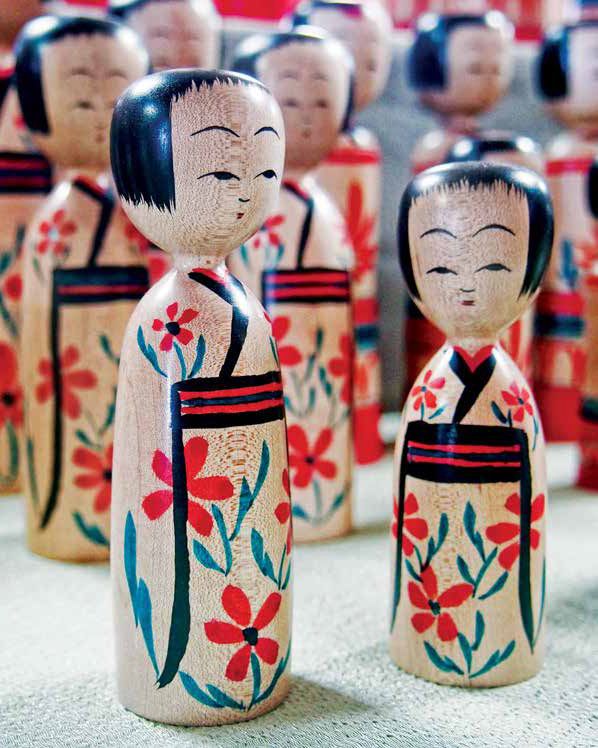 Artisans in Japan have been using lathes to shape wood since the 9th century. Originally pulled by hand, they became pedal-powered in the 1890s, and now are spun by motors. These lathes are what artisans called kojin use to make traditional kokeshi dolls out of well-dried wood. The dolls are durable and sparsely decorated, lending themselves to imaginative play. The Tohoku region of Japan is responsible for the popularity of kokeshi dolls, as they sold them to tourists who came to ski in Tohoku in the mid-19th century. Manami Okazaki fell in love with kokeshi when she visited her mother’s family in Tohoku, and has written two books about the dolls. The latest is Japanese Kokeshi Dolls: The Woodcraft and Culture of Japan’s Iconic Dolls. Okazaki gives us a look at how kokeshi dolls charmed those who bought them.

It didn’t hurt that kokeshi were also undeniably cute, defined more precisely by Okazaki as a type of “subdued” cute known as shibu kawaii. “Kawaii, the culture of cuteness, is probably the dominant pop-cultural aesthetic at the moment,” Okazaki tells me. “My bankcard has Hello Kitty on it. You see buses in the shapes of bears or pandas, airplanes in the shapes of dogs. It’s endless. But shibu kawaii is a kind of cute that’s cute in a way that isn’t—a retro or old-school cute.”

In other words, a level of cute that won’t give you diabetes. “I wrote a book on kawaii culture,” Okazaki says. “I spoke with designers from gaming companies whose work is 100-percent maximum cute. They told me that if you really want to see the roots of kawaii, you should check out kokeshi.”

Kokeshi has also been credited (or blamed, depending on how you look at these things) as the template for the mix of uniformity and variation found in everything from [email protected] toys to Pokemon. That may seem like a stretch if you are wondering what a kokeshi doll could possibly have in common with Pikachu or Bulbasaur, but the similarities have less to do with the decorations on the forms than the utility of the forms themselves as armatures for myriad variations.

Okazaki tells us more about the history, the craftsmanship, and the appeal of kokeshi dolls at Collectors Weekly.