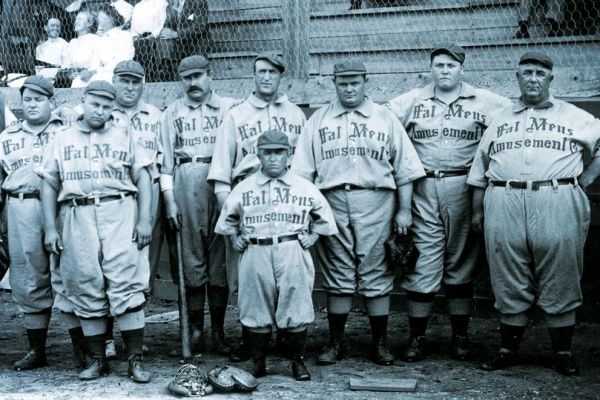 As we’ve said before, people will take any activity at all and make a competition out of it. Joey Chesnut won the annual Nathan’s Hot Dog Eating Contest (again) this past weekend by downing 76 dogs- a new record. Competitive eating has been in the news for about three decades now, but it was also a thing around the turn of the previous century, which grew out of Fat Men’s Clubs (FMCs), fraternal organizations in which men could be proud of their girth and socialize with each other. And, of course, eat.

FMCs did not invent eating contests — like most modern social phenomena, the history of competitive eating reaches into mythology — but they certainly popularized them in American culture. When the Manhattan FMC held an all-you-can-eat contest at their East Third Street clubhouse in 1909, several reporters were present to watch Frank Dotzler, a 380-pound alderman, devour 275 oysters, 8 pounds of steak, 12 rolls, 11 cups of coffee and 3 pies. He won $50 and eternal glory.

The considerable media attention enjoyed by these clubs says a lot about the era in which they prospered. “In the nineteenth and early twentieth centuries,” Laura Doan wrote in an engrossing article about Texas FMCs, “attitudes about fat bodies were remarkably different than they are now … As fat men’s clubs were at their peak, people positively associated men of a larger size with wealth and affability.”

Read about the rise of Fat Men’s Clubs and their gastronomic achievements at Inside Hook. -via Digg