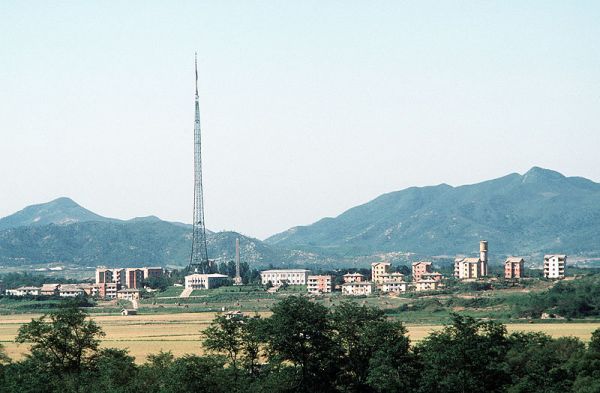 A “Potemkin village” is a neighborhood or town purposely made into an illusion, with a shiny facade that hides a not-so-shiny truth. Named after Russian military leader Gregory Potemkin, these villages look prosperous and inviting on the outside, while inside they may be empty, or poverty-stricken, or even full of nefarious activities.

The sole purpose of a Potemkin village is to make outsiders think that a situation is better than it really is, and perhaps no other country is better versed in this practice today than North Korea. Situated in the Demilitarized Zone is a village called Kijong-Dong, built in the 1950s in an attempt to encourage defection from people in South Korea.

From afar, the small town which directly faces its enemy, also known as the “Peace Village”, looks relatively normal. It has clean well-kept streets, a number of brightly-painted multi-storey buildings and identical low-rise apartments which all appear to have working electricity which would demonstrate North Korea’s prosperity and economic success following the split. The government claims that the village is home to some 200 residents, a farm, a hospital, and a school. Despite appearances however, the more likely reality is, KijongDong has no permanent residents.

Telescopic lenses have revealed that the village’s buildings are nothing more than empty concrete shells, lacking glass windows, interior rooms and even flooring. According to South Korea, caretakers flip light switches and sweep empty pavements, all to preserve a grand illusion. Photographs from inside the village, are non-existent and Western media know it better as ‘Propaganda Village’.

But Potemkin villages exist all over the world, and they aren’t always government projects. Read about such villages in different parts of the world, including the US, at Messy Nessy Chic.