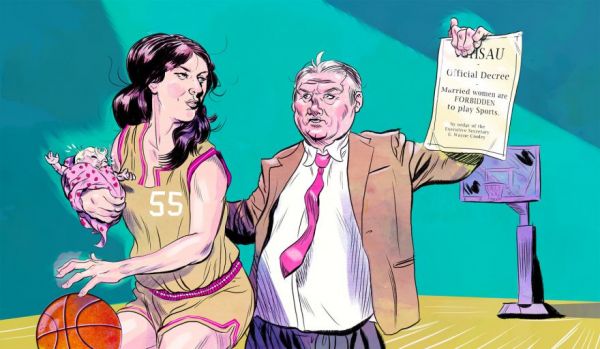 As a freshman basketball player, Jane Christoffer averaged 35 points per game. This was exceptional even in the days of girls six-on-six basketball, where players were restricted to only half the court. Jane’s sophomore year yielded an average of 47 points per game. Then she married Ken Rubel and had a baby, but did not drop out of school. When she was ready to rejoin the basketball team for her senior year in 1971, Rubel ran into a stone wall in the form of E. Wayne Cooley, the head of the Iowa Girls High School Athletic Union (IGHSAU).

When Cooley first began at IGHSAU, nearly two decades before Rubel gave birth, he instituted a rule that forbid married women, divorcées, and mothers from playing high school basketball. That regulation expanded to all prep athletics as the IGHSAU added more sports. His reasoning for the restriction? “Husbands and homes were the first obligation of the wives.” He clarified his uber-traditional view of gender roles in a December 1977 womenSports story about the lack of female coaches in Iowa. “Not because women aren’t capable, but because historically and traditionally, a woman will be a professional person for three or four years; then she gets married, has a family, and abandons professional life as a coach,” Cooley told the magazine. “I hope that’ll never change. We’ve got to have some housewives and some mothers or something’s going to happen to this society.”

However, there were no such rules for boys high school athletics in Iowa. A male student who was married had played basketball for the same school the previous year. Jane Rubel didn’t take that sitting down. She wanted to play, and she wanted to earn a college athletic scholarship, so she sued. Read the story of Jane Rubel’s struggle to play basketball at Longreads. -via Metafilter