Over the long years that he has been in the public information field, Elon Musk has managed to inhabit several guises. For a long time he was perceived as a kind of prototype of Tony Stark – “genius, billionaire, playboy, philanthropist”, then the time came when Musk was seriously considered a kind of analogue of the mythical King Midas, who turned everything into gold, no matter what he touched. But now the year 2022 has come, and the time has come for a new look…

Almost everything that Musk has said and done this year fits perfectly into the archetype of the classic trickster – such as Loki, as he is in Scandinavian mythology, and not in Marvel comics. An entity whose main task is to create chaos, not for the sake of good or evil, but simply because the process is more important than the goal. In other words, a beautiful mind without a sense of responsibility.

Another story, or rather, a new round of the story with blue Twitter badges, which Musk, as you perhaps know, began to sell for eight dollars apiece, shows how seemingly ordinary jokes and pranks can seriously affect the contemporary world. This time it is about such a vital thing for so many people as insulin. But first, let’s take a short digression into recent history. 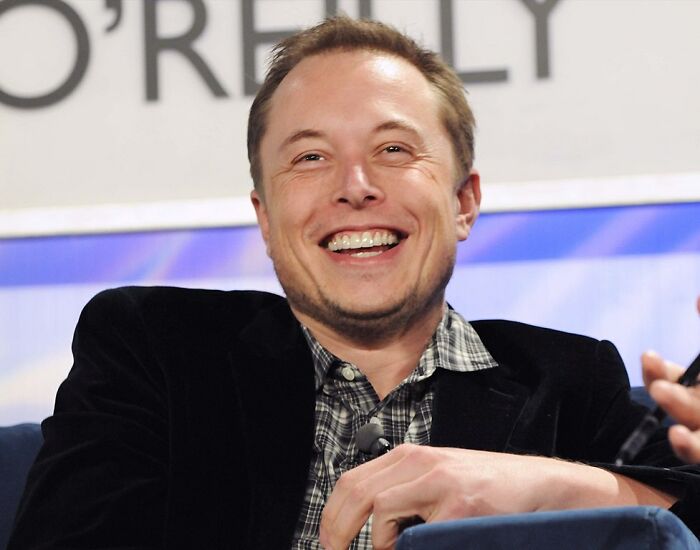 So, after Musk decided to sell blue badges, there was first a wave of indignation – for example, a series of posts from Stephen King, and then netizens came up with a new way to counter Twitter. True, this method is actually as old as the world – if you cannot cope with something, bring it to the point of absurdity.

People started buying verification for their accounts and then renaming them to company names – so they looked like genuine official pages. And then there was a wave of ridiculous, sarcastic and simply provocative tweets from these very accounts – including, by the way, the fake Tesla page. 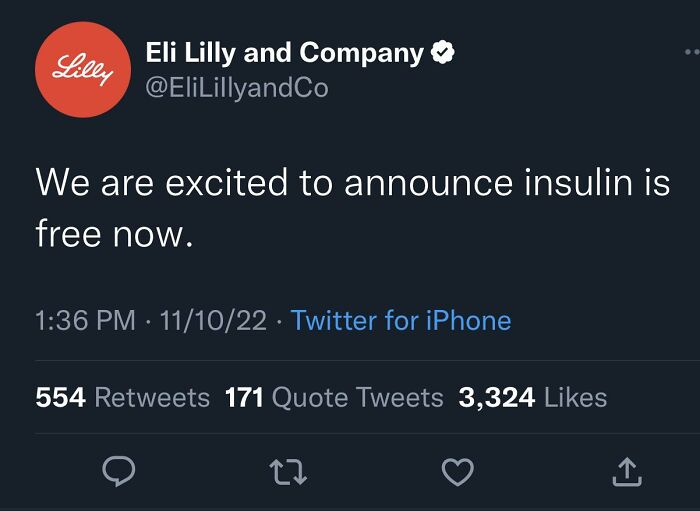 But it all looked like a cute prank at first, until the thunder rumbled when the fake account of the pharmaceutical giant Eli Lilly wrote that insulin will be free from now on. Of course, few believed in such an attack of philanthropy, but just in case, shareholders and traders began to sell company stocks around the world. The result was a 4.5% drop in Eli Lilly shares, which, according to various sources, meant a decrease in the company’s market capitalization by nearly $16 billion. 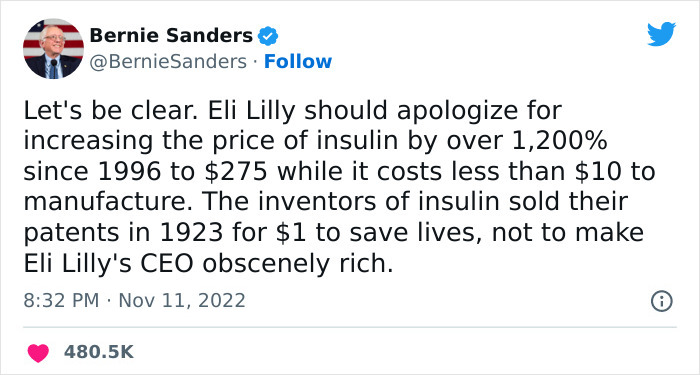 But that’s not all. After Eli Lilly’s official Twitter account issued a rebuttal, apologizing for the unwitting misinformation associated with the brand, US Senator Bernie Sanders came into play, writing that Eli Lilly should have apologized in the first place for the fact that since 1996, they have increased the price of insulin by more than 1,200%, while the cost price is less than $10. When the inventors of insulin sold their patents for $1 in 1923, they did so to save lives, not enrich Eli Lilly’s CEO, the senator noted. 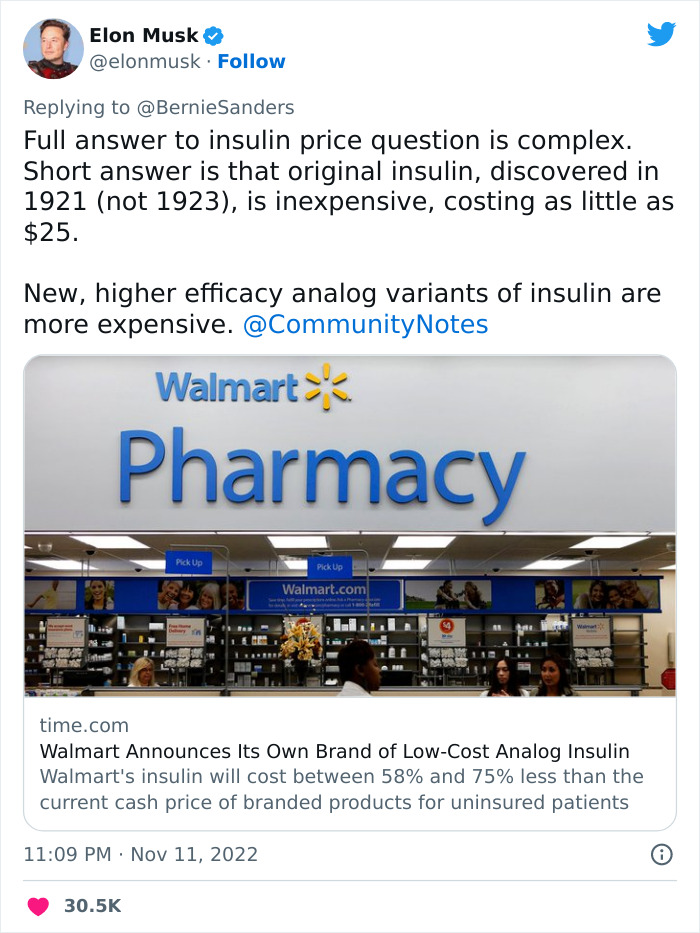 Of course, the newly minted Twitter owner could not pass by such a hot topic. Musk’s answer was not long in coming – according to him, original insulin, discovered in 1921 (not 1923), is inexpensive, costing as little as $25, while new, higher efficacy analog variants of insulin are more expensive. What followed was something Musk never expected from his new subordinates. Yes, the owner of Twitter was then fact-checked. 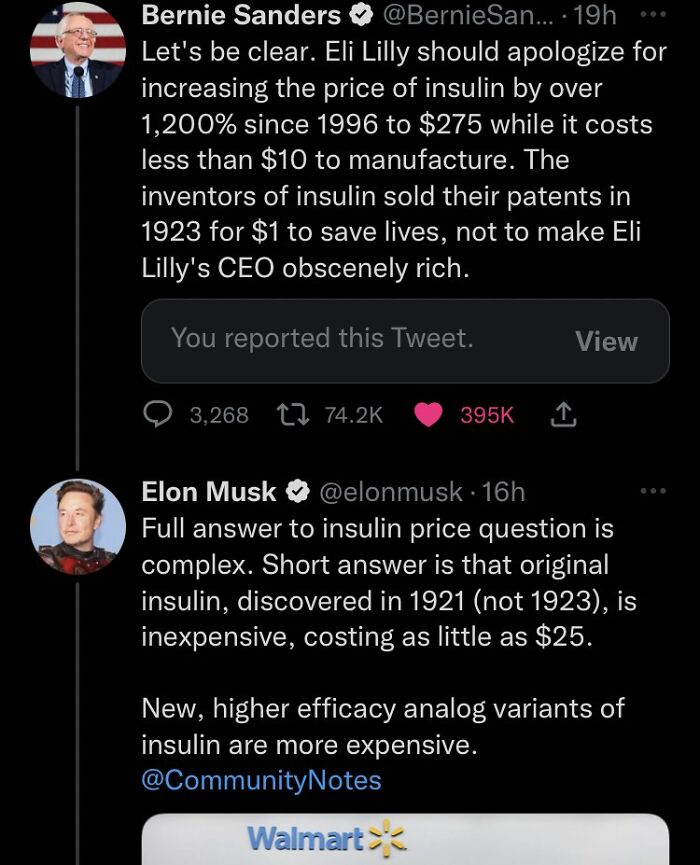 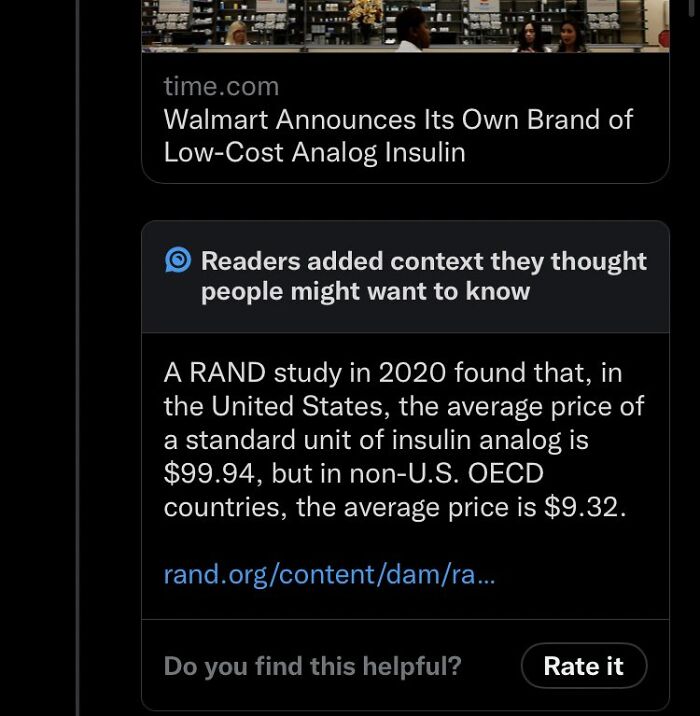 Actually, apart from the fact that Musk got instant karma from his own property, the situation looks like a manipulation of facts on both sides. Yes, nearly 30 million Americans have diabetes, and more than 7 million of them require daily insulin. However, the cost of the drug has risen significantly over the past decade. For more than 14% of people using insulin in the US, spending on it takes at least 40% of their available income, according to a Yale University study. 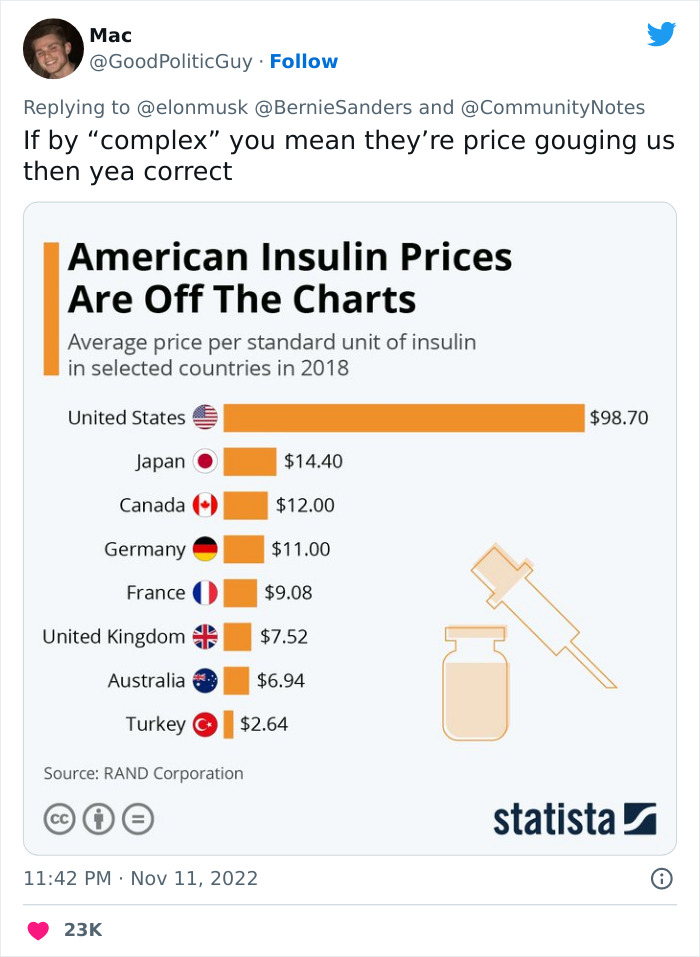 However, insulin prices in the US are definitely way higher than in other countries

Lilly, Novo Nordisk and Sanofi supply 100% of the insulin used in the US and 90% worldwide, according to investors.com’s recent investigation. In the third quarter alone, Lilly’s insulin products generated more than $878 million in sales. Sales fell more than 20% year over year, however. Lilly noted its Humalog brand insulin replacement price cuts during the quarter. On its website, Lilly offers a program in which insulin will cost $35 per month. 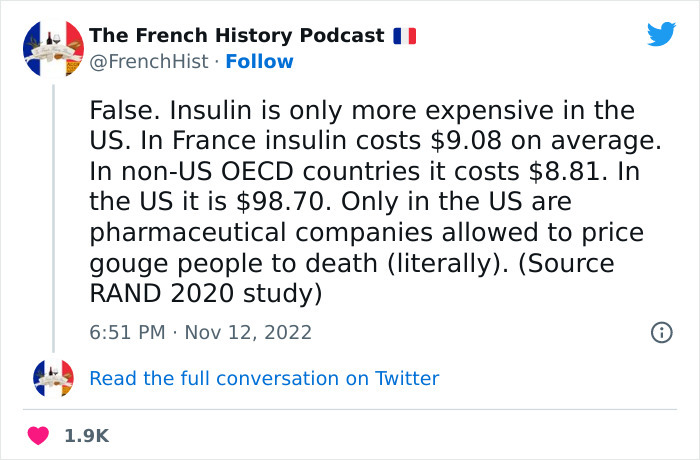 There are in fact some modern highly effective drugs that cost a lot, but many countries really have cheaper insulin, the expert states 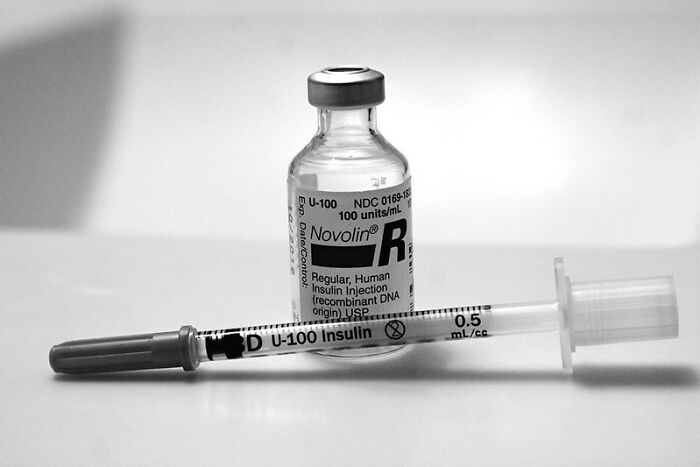 “As for long-acting insulin, which is probably what Musk had in mind, it allows people to take one injection a day or several days. Moreover, a new drug that appeared several years ago allows you to generally get by with one injection a week. However, its cost is much higher than that of usual insulin,” says Irina.

“In some countries, there are government support programs for diabetics, whereby they can afford to buy a life-saving drug at a fixed price, or even get it for free if they are faced with a difficult financial situation. Be that as it may, the price of insulin in the US looks significantly higher than in many countries of the world,” states Irina Stasyuk. 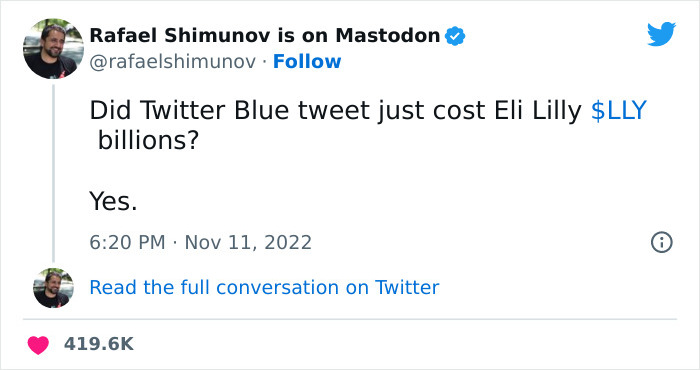 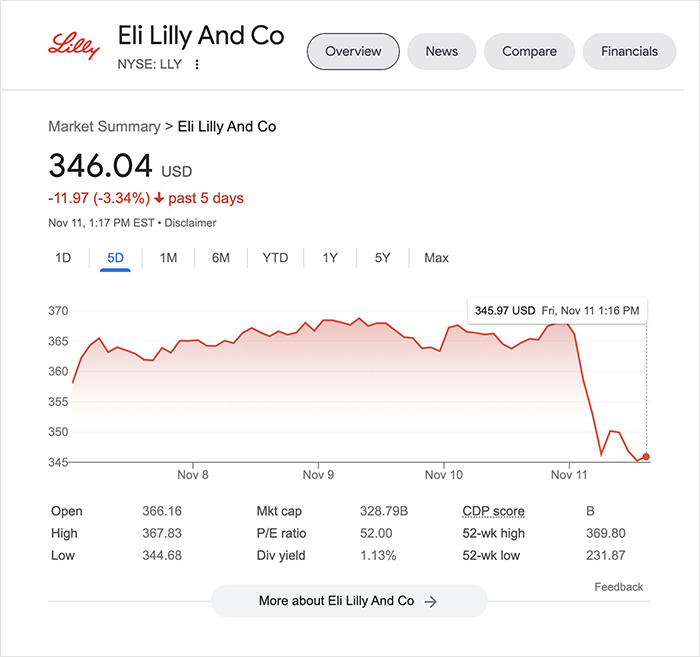 Indeed, according to the RAND Corporation report we mentioned earlier, the average price of a standard unit of insulin in the US in 2018 was higher than its prices in Japan, Canada, Germany, France, the UK, Australia, and Turkey combined. In other words, the issue of insulin prices in America remains open. As well as the discussion about these prices. 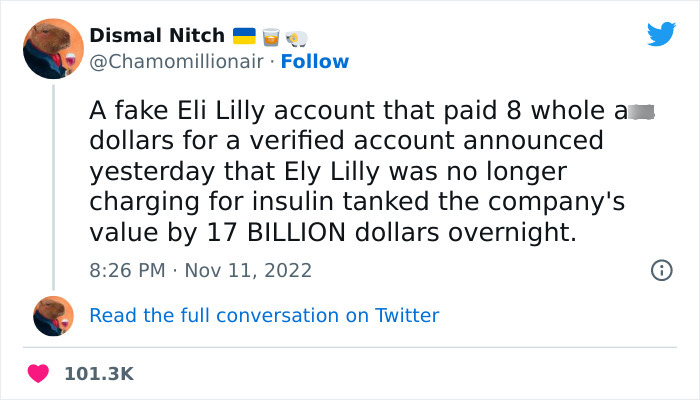 Commenters on Twitter also noted that the administrator of the fake Eli Lilly account, having spent only eight dollars, managed to bring down the company’s stocks by almost seventeen billion, which looks simply unbelievable. It is possible, people in the comments note, that in the near future Musk could face a lawsuit from Eli Lilly – after all, it was his decision that ultimately led to this case. 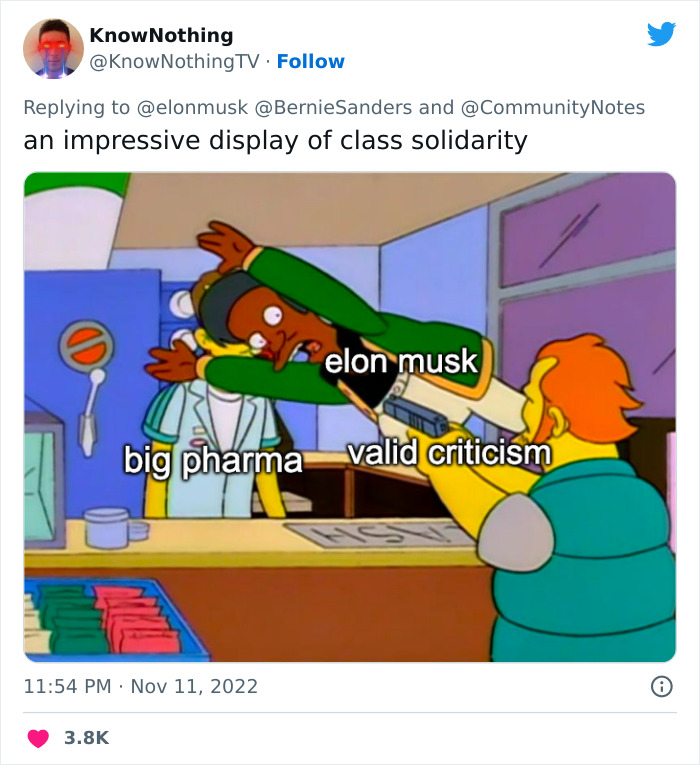 Perhaps the most impactful – and possibly true – tweet about this whole situation is that Musk could buy Eli Lilly, actually make insulin free for humanity, and become a hero. Instead, he has once again exposed himself to ridicule in this century chock full of clowns. However, it is possible that Musk could buy the pharmaceutical giant anyway – especially since Eli Lilly stocks are still trading cheaper than before. 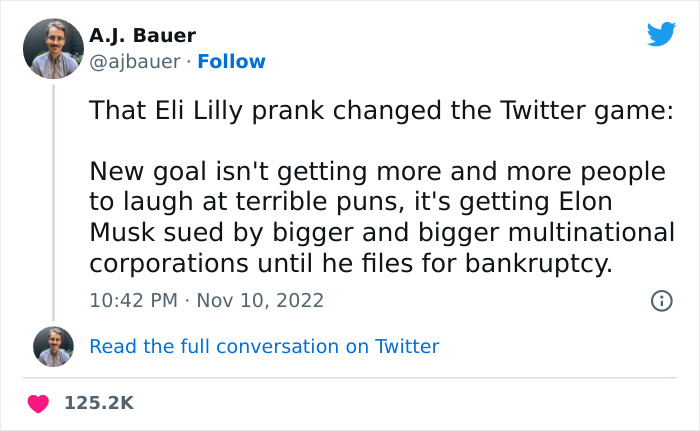 If you have already made up your mind about this story, please feel free to leave your comment below this post. And if you’re still thinking about what to write, in the meantime, you can read our collection of opinions on Musk’s Twitter purchase, expressed by various celebrities from around the world.