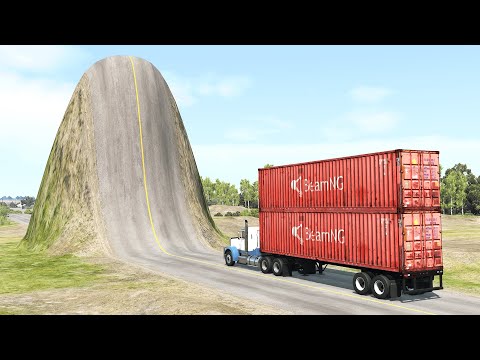 The game BeamNG.drive is a traffic simulation game based on “soft body physics,” meaning it gives you realistic outcomes based on the laws of physics. However, the game does not prohibit you from being stupid. This sequence, brought to you by YouTuber BeamNG Nation, shows us what happens when a giant bulge suddenly appears in the road. Sort of a reverse sinkhole, as it were. It never occurs to the drivers of the various vehicles to leave the road and go around it, so we might assume that the game is programmed to stay on the road. Only one vehicle gets over it unscathed, but his suspension and cargo is most likely ruined. The video racked up more than a million views in three weeks, and when it went to Twitter, just one Tweet got 163,000 likes in two days. We just love to watch harmless destruction, which explains Looney Tunes and planned building demolitions. -via Digg