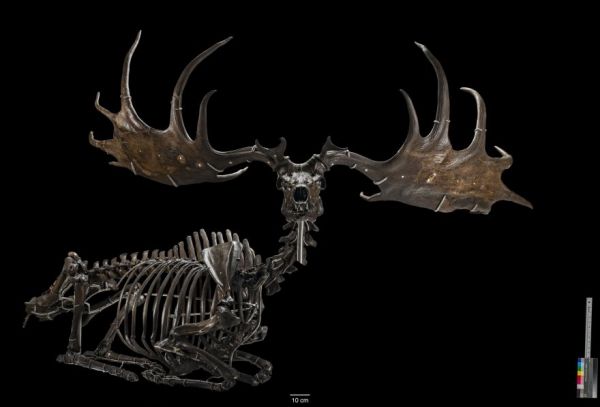 The Irish elk (Megaloceros giganteus), which died out about 8,000 years ago, sported the largest antlers of any animal ever. Their antlers could be as big as 12 feet across- and they regrew those antlers every year! Males of the species were about the size of an Alaskan moose, while females were somewhat smaller and did not grow antlers.

As a name, Irish elk is a double misnomer. The animal thrived in Ireland but was not exclusively Irish, ranging across Europe to western Siberia for some 400,000 years during the Pleistocene. Nor was it an elk; it was a giant deer, with no relation to the European elk (Alces alces) or North American elk (Cervus canadensis). The evolution of its most striking feature was driven by sexual selection; no survival advantages derived from such enormous antlers. “It was all about impressing the females,” says Adrian Lister, a paleobiologist at the Natural History Museum in London, England, and a leading expert on the species.

The prevailing theory for some time was that those antlers eventually grew to be so big that they disabled the animal, but scientists now have better ideas as to why the Irish elk went extinct. Read what we’ve learned about the Irish elk at Smithsonian.