Quarantine hasn’t been easy for anyone, especially new parents unable to visit family, access childcare, or even experience an occasional change of scenery. For new parents who are also immigrants, the social isolation can be overwhelming. When Nigerian engineer Izu Okongwu’s wife gave birth to their second child in 2015 in Kitchener, Ontario, an ocean away from their village, the question of how to stay active and connected to home became a big concern—one that many more people are experiencing now.

“She felt like she needed an activity to keep her on her feet,” Okongwu said of his wife, a nurse at a nearby hospital. Out of nostalgia for a childhood spent cycling through the countryside, Okongwu’s wife purchased a bike, but without family nearby to watch the children when maternity leave ended, so did her adventures; the bike ended up in the garage, parked and forgotten. This month, Okongwu launched Blync, the world’s first VR-enabled bike controller, enabling cyclists to “ride” through beautiful terrain from the comfort of home using a VR device or computer. He’s hoping the project will not only get his wife back on two wheels but also help millions of others in isolation, or far from home, to travel through challenging and exciting landscapes in VR. 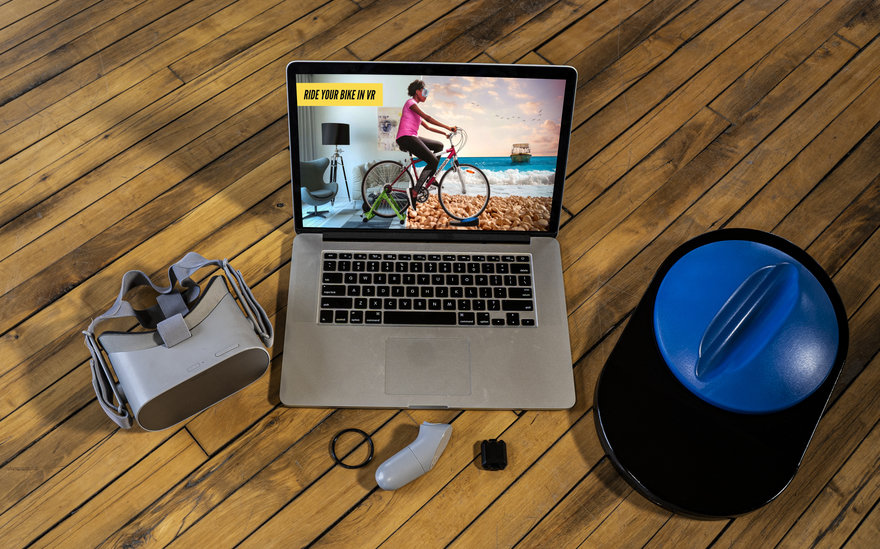 Okongwu has always had an entrepreneurial streak and a curiosity for tinkering with various hardware pieces, pursuing an electronic engineering degree and later a graduate degree in software systems from UBC Vancouver, where he was exposed to a new world of software innovations. A chance encounter in Disney World in 2017 provided an additional source of inspiration. “I’d heard of VR earlier on but had never thought much of it until I went on the Avatar ride,” he explained, referring to the interactive, movie-themed VR exploration of imaginary terrains. “After I got an opportunity to experience it, I understood how immersive VR can truly be.” He joked that the ride got him thinking of all the ways he could manipulate reality through technology, wondering if he could, specifically, “trick my wife into biking indoors with a VR device that allowed her to enjoy it as much as biking outdoors.” 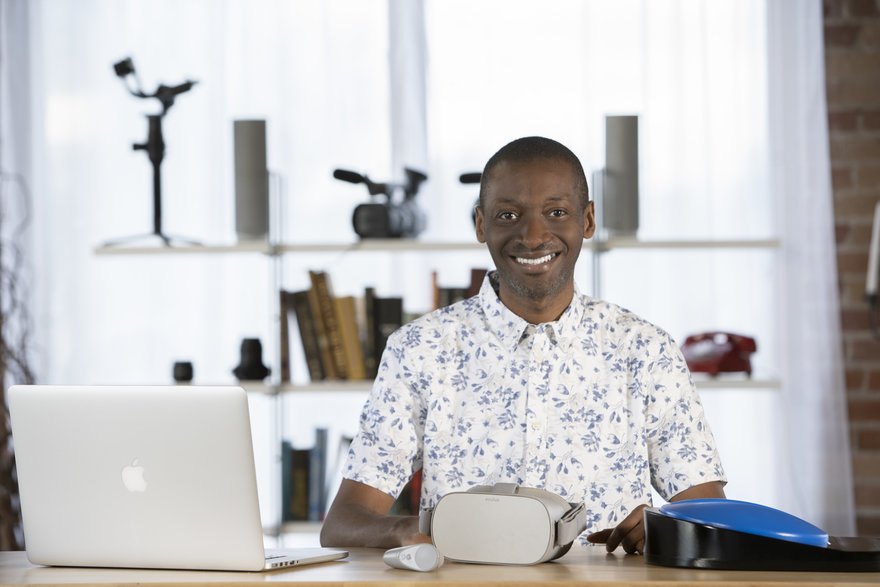 Okongwu purchased a simple, mobile VR device to experiment with, later working with Oculus Rift and schooling himself on the uses of Arduino and the software program Unity, even creating his own test games. Confident in his ability to fuse the software with an actual biking system he, along with a team of engineers and designers, began developing Blync—the prototype resembling a rudimentary circuit project. “I attached plastic gears on the handlebar stem, which turns another gear attached to a variable resistor,” he explains. “I used an InfraRed sensor for the back wheel, and had to put white masking tape on it.” When the wheel spun, the InfraRed would detect when the masking tape passed by, calculating speed. These two sensors were then sent to a breadboard circuit with an Arduino microcontroller to process the data. “Later on in my development, while researching other ways of easily getting the handlebar signal, I had to connect to an optical mouse and use the motion of the mouse attached to the wheel to detect the direction of the handlebar.” These early touches helped create the current, compact system made up of a path sensor designed to support any bike’s wheel size, a speed sensor, and access to the app with all the environments needed for biking. Blync also contains a mobile companion app. 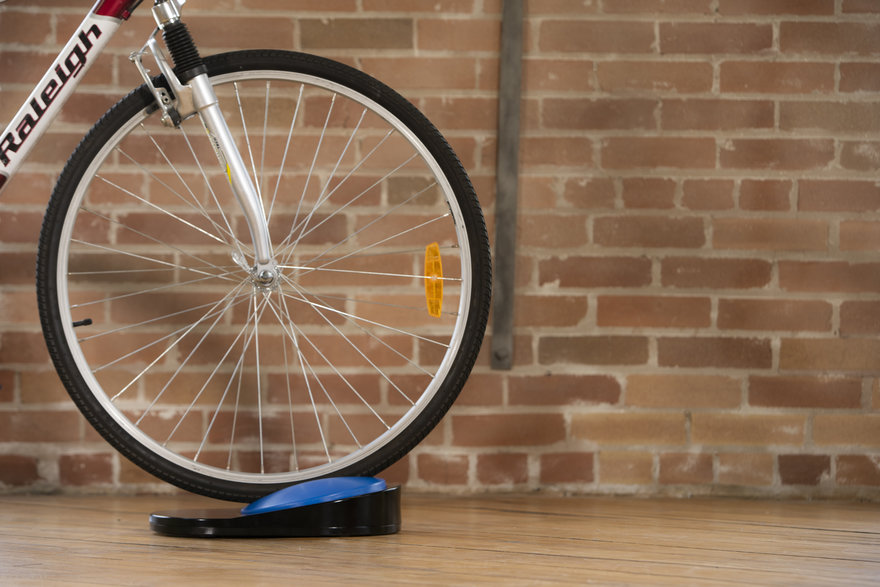 While other virtual bikes can control your path through the digital world, Blync‘s path sensor lets you turn and steer wherever you want, do stunts, go off-road, or even explore a new region. It also records your fitness activities, including calories burned, average riding power, and speed, enabling riders to toggle between first and third-person modes, minimizing or eliminating the dizziness that can accompany VR, and permitting users to ride via their computer screen or laptop. There are even plans to create a platform where virtual riders can select an environment to bike in, with an environment library that will evolve as users design and upload their own settings.

For this first generation of Blync, all a rider needs to do is place the bike’s front wheel on the path sensor, and strap the speed sensor on the back wheel’s hub. Most activities will be done inside the VR app, which is designed so that it doesn’t require any other controller or device to begin riding. Once in the app, you can select your avatar and virtual bike, whether you’re cycling alone or with a loved one, and open up the menu inside the VR app, using your head as the pointer to select your preferred location. Several games and in-house-designed environments are also provided, with the added option of joining or creating a private event.

When you’re not biking with Blync, a mobile companion app permits you to view the statistics of your bike session (calories, speed, power), manage events, interact with friends, or view upcoming environments. 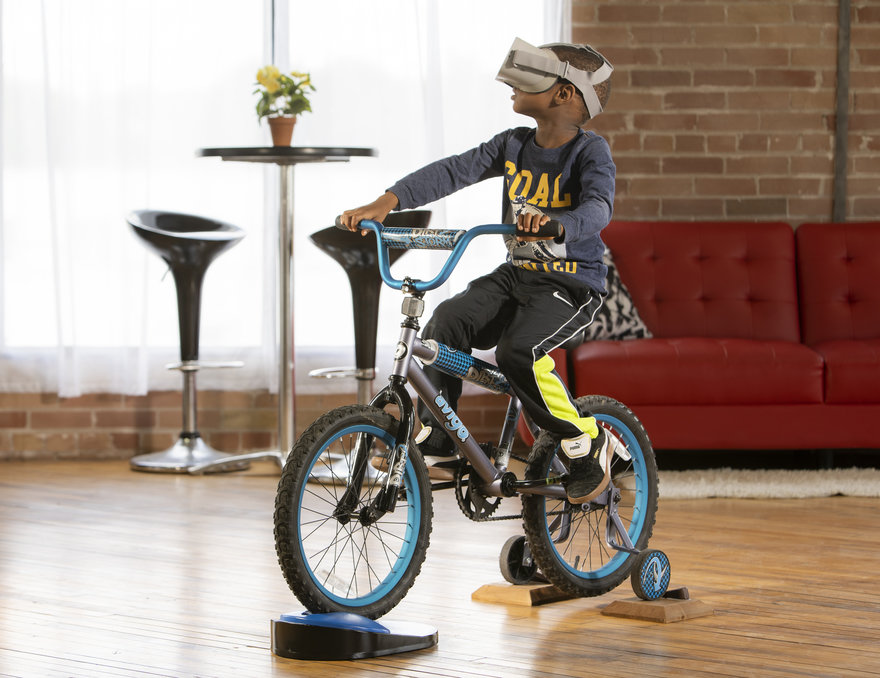 With the pandemic significantly limiting our exercise options, and biking soaring in popularity, Okongwu is hoping to get even more of us cycling—no matter the season or state of the world.

Blync is live on Kickstarter through September 10, 2020.