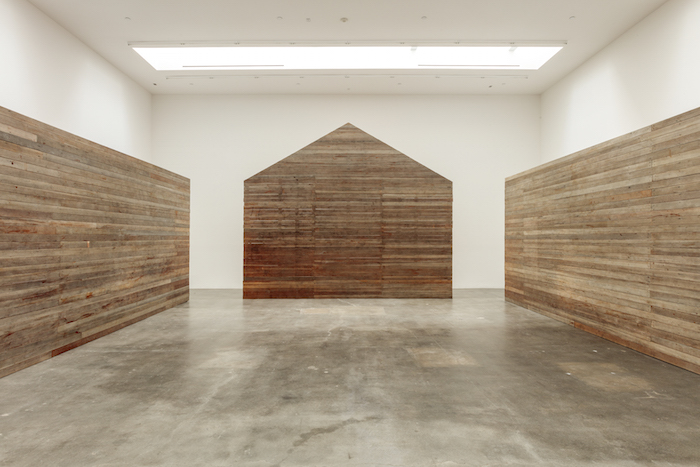 Sam Durant, “Every spirit builds itself a house, and beyond its house a world…Build therefore your own world”, 2017, Wood, vinyl text, 167 1/2 x 539 3/4 x 377 inches overall. Photo: Joshua White/JWPictures.com. Courtesy of the artist and Blum & Poe, Los Angeles/New York/Tokyo

Glowing high above the Paula Cooper Gallery, on West 21st Street, is a sign of the times: The orange light box, appropriated from a 1963 protest sign, was made by artist Sam Durant. It proclaims, as if it is howling, in black hand written lettering, “END WHITE SUPREMACY NOW.” In a new exhibition, Sam Durant: Build Therefore Your Own World, at Blum & Poe, Los Angeles, which runs concurrently with Durant’s public installation in New York, the artist pairs 19th century illuminations with America’s marginalized histories to explore the country’s enduring racial divide.

“I was invited a couple of years of ago to do a public project in the town of Concord, Massachusetts”—ground zero for the Transcendentalist movement—”that dealt with the pre-revolutionary history of slavery at the historic house site of Reverend Williams Emerson, the grandfather of Ralph Waldo Emerson, who lived in the house as well,” explains Sam Durant to The Creators Project. “That project in Concord, The Meeting House, inspired the works at Blum & Poe.” 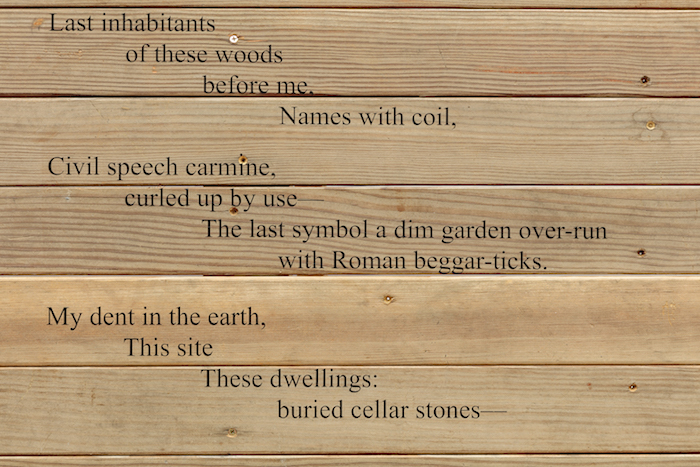 Excerpt from Robin Coste Lewis’ poem “Inhabitants and Visitors,” as installed on Sam Durant’s work “Every spirit builds itself a house, and beyond its house a world…Build therefore your own world,” 2017.

The central work in Build Therefore Your Own World is Durant’s Every spirit builds itself a house, and beyond its house a world…Build therefore your own world, an installation of a deconstructed wooden house that evokes the shadows that persist alongside this nation’s shape. The structure recalls the first houses built by and for the first generation of freed Africans who lived near and around Walden Pond, generations before famed Transcendentalists Henry David Thoreau wrote Walden. The walls of Durant’s house are inscribed with original commissions by black writers and poets Robin Coste Lewis, Tisa Bryant, Danielle Legros Georges, and Kevin Young that challenge and presents a rousing read of transcendentalist texts. 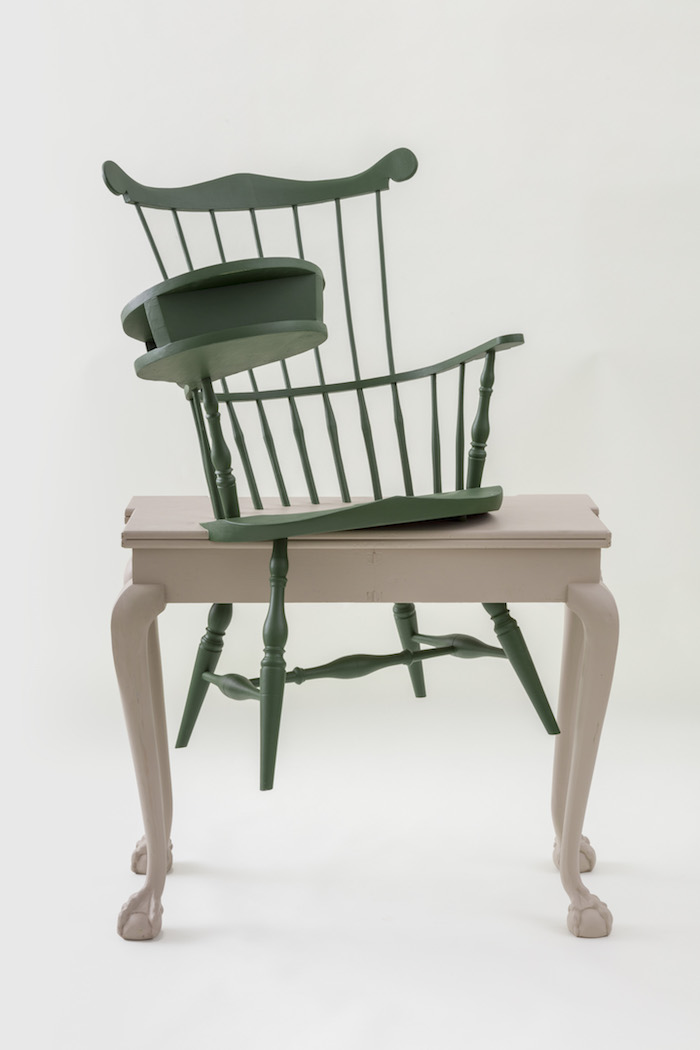 “The boards that form the wall of the house schematic installation come from the platform that I build in Concord to have discussions, poetry readings and all kind of public programs,” says Durant. “Those boards carry the imprint and index of that project from Concord. There are four poems from a suite that respond to the history of the site are inscribed into the walls of the main sculptural installation.” Stenciled into one of the wallboards, for instance, is an excerpt of Robin Coste Lewis’ “Inhabitants and Visitors.” Durant refers to Lewis’ poem as “an erasure of Thoreau’s Walden.” Lewis wrote “Inhabitants and Visitors” by removing words from the book’s section on the free African people who lived in Concord, Massachusetts before Thoreau. It “foregrounds a hidden text within the text,” argues Durant, revealing an alternate reading of the pre-revolutionary circumstances of a free black community. Transcendental (Wheatley’s Desk, Emerson’s Chair), a sculpture of the 18th century writing desk of Phyllis Wheatley, the first published African-American female poet, who was born enslaved, and the 19th century writing chair of the poet and Transcendentalist leader Ralph Waldo Emerson, displays Durant’s ability to bring visibility to the erasure and intersecting histories of Transcendentalism and American racism through poetry. 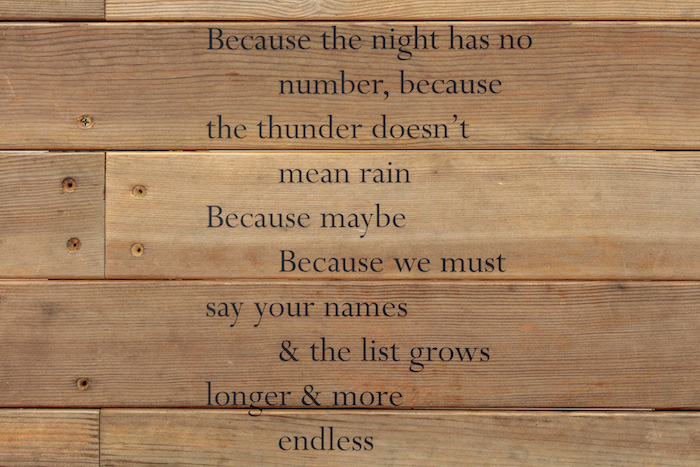 Durant, who calls himself, “in a sense, a failed poet,” uses an economy of language in his art that ties together the past, present and perhaps the future. Every spirit builds itself a house is named after a promising line from a Ralph Waldo Emerson essay. The texts on its walls speak of the reoccuring forces the novelist Chimamanda Ngozi Adichie says have “flattened the poetry in America’s founding philosophy.” On one of the walls is a stanza from Kevin Young’s “A Frieze for Trayvon Martin,” it conjures a contemporary feeling rooted in the fundamental diminution of America’s founding constitution. Durant’s Dream Map, Ursa Minor, alludes to the lasting impact of the founding father’s refusal at the signing of our governing document to enact universal freedoms for all men. The Dream Map sees Lincoln pennies form into the Ursa Minor constellation, which features the North Star that slaves used to steal away toward freedom. The wall sculpture is mapped on a prison blanket, evoking the reality that slavery was largely replaced by the contemporary mass incarceration of African Americans. 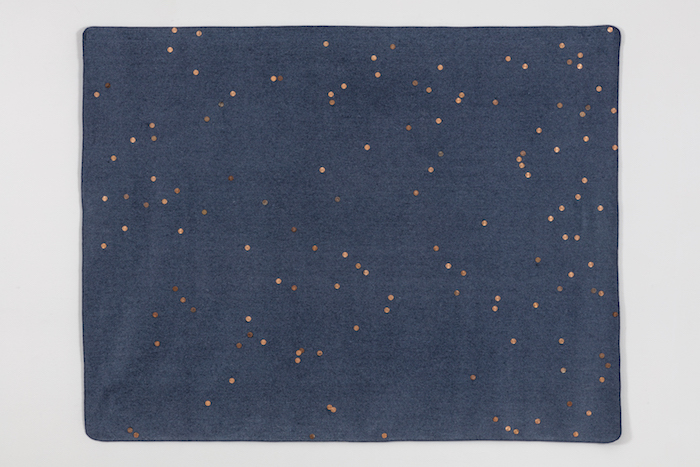 “I’ve always been attached to different types of language,” says Durant. “From vernacular signage like handmade protest signs that are so loaded with different kinds of meaning to mom and pop stores that advertise by hand lettering their windows to poetry and the power of words that aren’t said and read between the lines,” he says.

“Working with objects and bringing ideas that are linguistic into the visual realm of sculpture and objects I think is finally where I found a way to express these things. The sculptures in the show at Blum & Poe bring a similar kind of symbolic meaning.”

On the façade of Blum & Poe, Durant presents a new light box. One that measures the excavation of historical texts, the rich tradition of African American poetry and race found inside of the gallery. It’s a testament and clear reading of a people’s history of America. It declares, “THEY TRIED TO BURY US. THEY DIDN’T KNOW WE WERE SEEDS.”