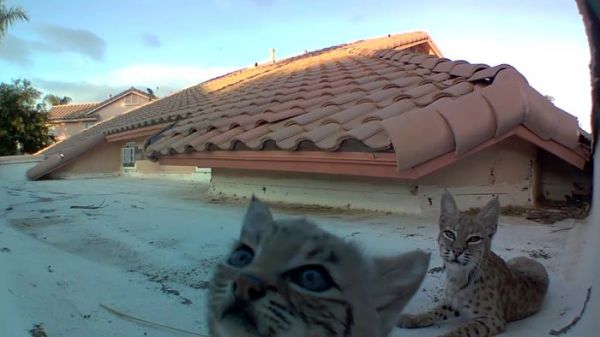 Have you heard the one about the family of squatters living rent-free upstairs? Redditor littlebill246 has an overhang on the roof of his house in Arizona. Last year, a bobcat gave birth there and raised a litter of bobkittens. When the same thing happened this year, he decided to set up a camera. He says,

This is the 2nd year I’ve owned the house and 2nd time I’ve seen it happen. But basically this bobcat is smaller then last years mom and I can only think that it’s actually one of the kittens from last year.

The little space under the roof on the right is actually where she gave birth and the kittens like to sleep, it’s pretty decent shelter.

Also, I don’t want to do anything more than just put up a camera. Because I’ve seen a few people suggest building a dog house or something, but they are wild animals and needed to be treated as such and cant get used to humans. Literally last week in another part of town, some guy decided to pick up one of the kittens in his yard and ended up getting stitches. So as much as they are adorable, they are still wild and dangerous!

I have been super tempted to put up some kind of ball up there though lol.

Bored Panda has more on the bobcats and a video compilation.