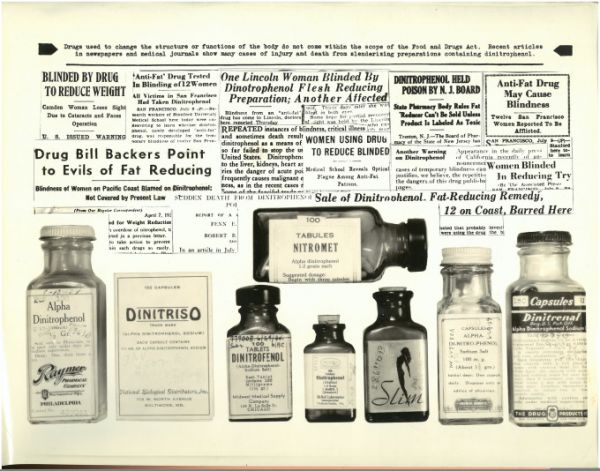 In 1933, doctors discovered that a chemical known as 2,4-Dinitrophenol could raise the body’s metabolism. It immediately hit the market as a diet aid. And it worked! Diet supplements containing DNP became all the rage.

DNP wasn’t a new substance. It had been used in pesticides, preservatives, and explosives for years. Highly flammable, it has eighty-one percent of the explosive strength of TNT, and it tastes like sulphur. It was its explosive properties that made it so effective for weight loss. Instead of converting food to fat or energy, DNP turns it into heat, “setting tiny internal fires” that can raise the body’s temperature high enough to cause brain damage and essentially cooking people from the inside out.

What could possibly go wrong?

At the time, medicine was regulated, but since obesity was not considered a medical condition, diet aids were not. Soon, varied and horrific symptoms showed up in DNP users. Some were permanently disabled, and some died. Read the story of DNP at Dirty, Sexy History. -via Strange Company