Always, always, always put everything your boss promises you in writing. Get to know the details of your company’s policies and leave a paper trail of any important verbal agreements between you, your manager, boss, and HR. Doing just those two things can save you a world of trouble down the line and you’ll sleep better at night.

That’s the message that redditor u/ClubWag, who used to work as a community pharmacist, sent the r/MaliciousCompliance subreddit and the internet at large. They explained how their boss—the ‘Bossman’—tricked them into believing that they got a promotion. A promotion that the boss promised in exchange for not asking for gas reimbursements while on the job.

Well, things took a very dramatic turn once the redditor decided that enough was enough and that it was time for some sweet payback. Though the Bossman wasn’t going down without trying to intimidate the heck out of them. You’ll find the full oh-so-satisfying work revenge story below, dear Pandas, so scroll down, and let us know in the comments what you think of it all.

Bored Panda got in touch with u/ClubWag who was kind enough to answer some of our questions about what happened at their old job. They told us that they try not to dwell on what happened. “It has been a few years, and while I’m disappointed that his [my boss’] actions and those of the store manager who participated in them have not had any professional consequences, I also don’t really dwell on it. It was a chaotic chapter in my life and now I’ve turned the page,” they told us that the only thing that made the job bearable was the daily support of their other colleagues who were absolutely fantastic and the opposite of the managerial staff.

“I did not expect the story to blow up quite so much on Reddit, but I am very happy to see that people from many other professions have taken vicarious joy in the story or come out to share their own stories.” They stressed the fact that the working conditions that pharmacists face are “abysmal and need attention as a matter of public safety if nothing else.” What’s more, they pointed out that they weren’t their boss’ biggest victim: “The abuses my boss leveled at me pale in comparison to what he did to others or what some of his colleagues at the same company were doing.”

Scroll down for our full interview with the author of the story about the importance of keeping a paper trail, their advice for what to do in similar sticky situations, why the biggest victory wasn’t actually neither the revenge nor the money, as well as what red flags indicate that you might need to find a better job—with a better boss. 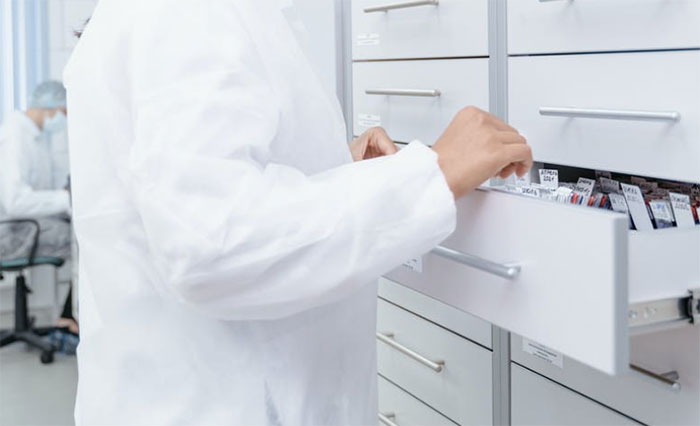 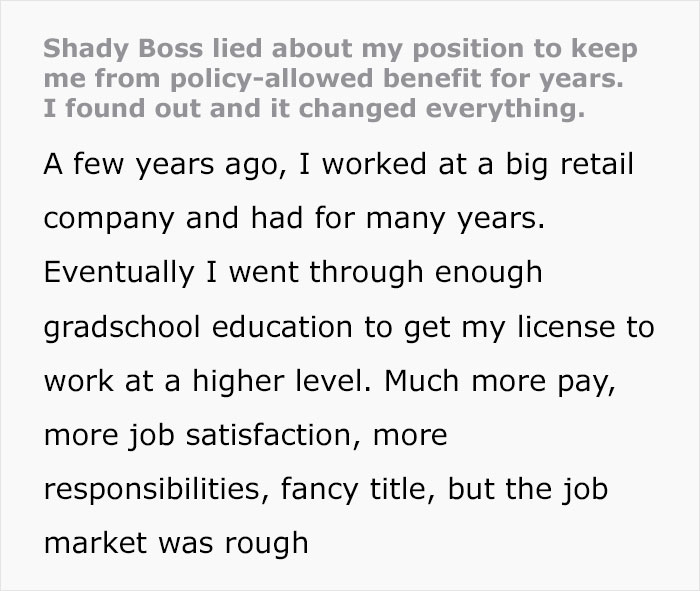 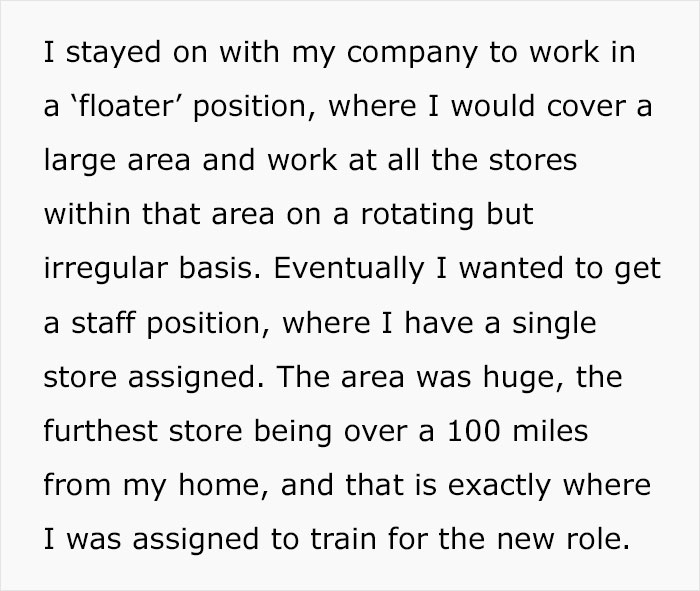 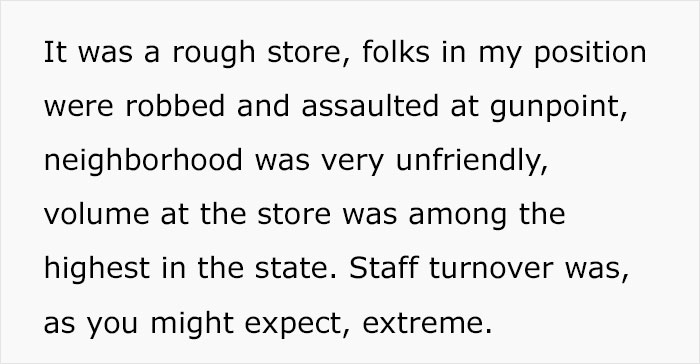 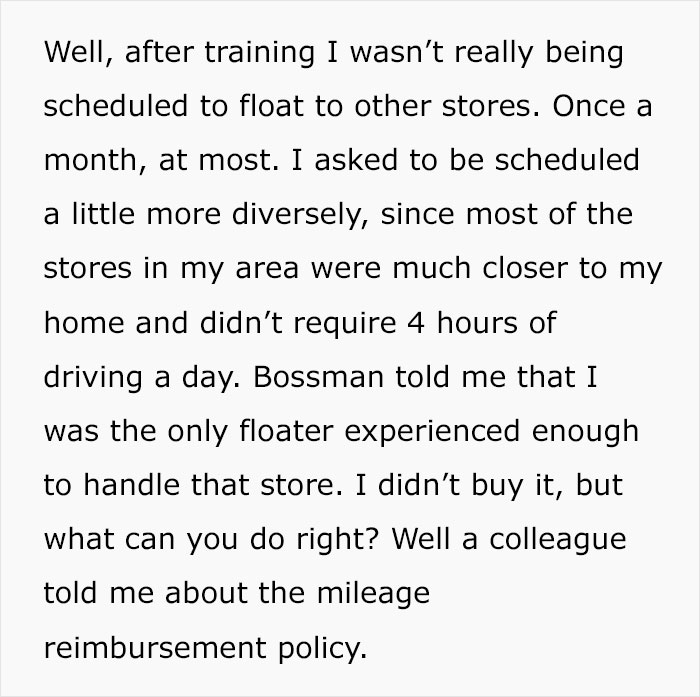 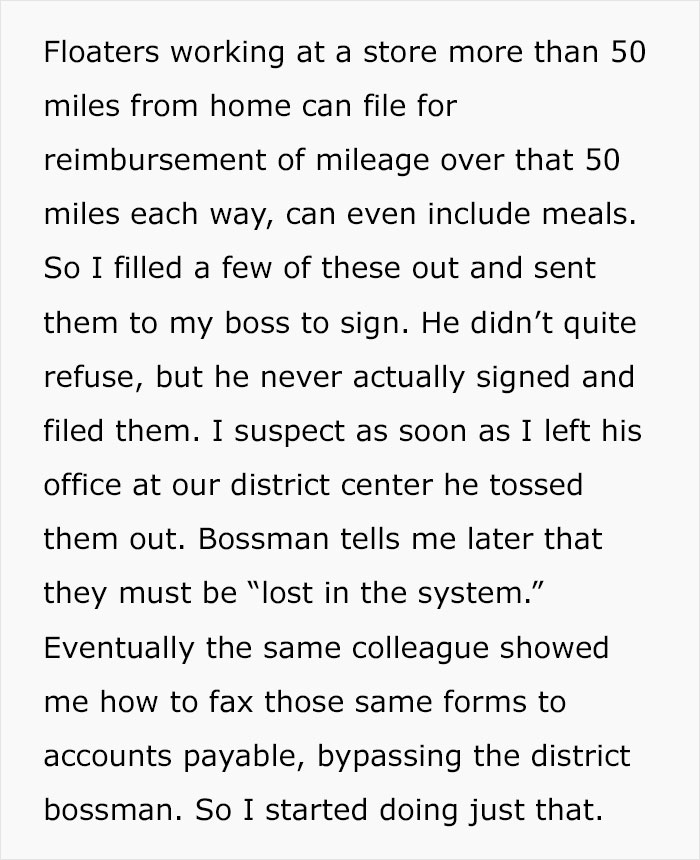 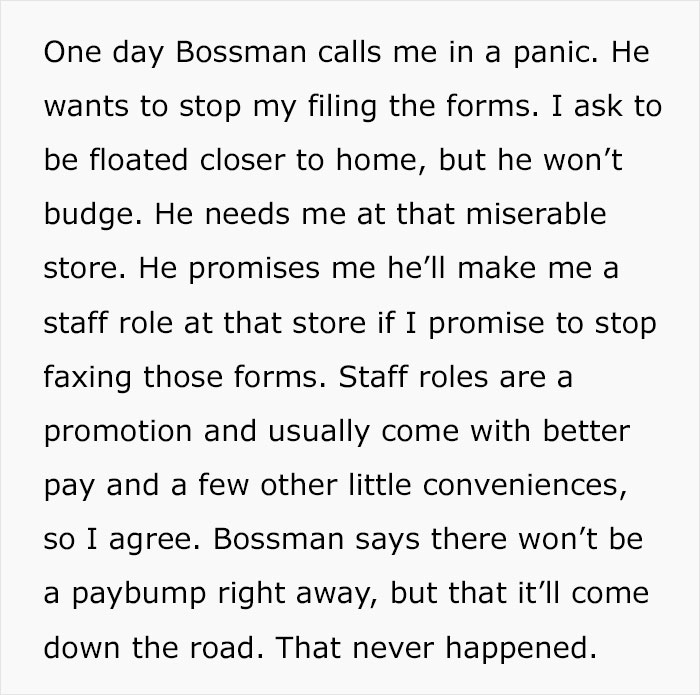 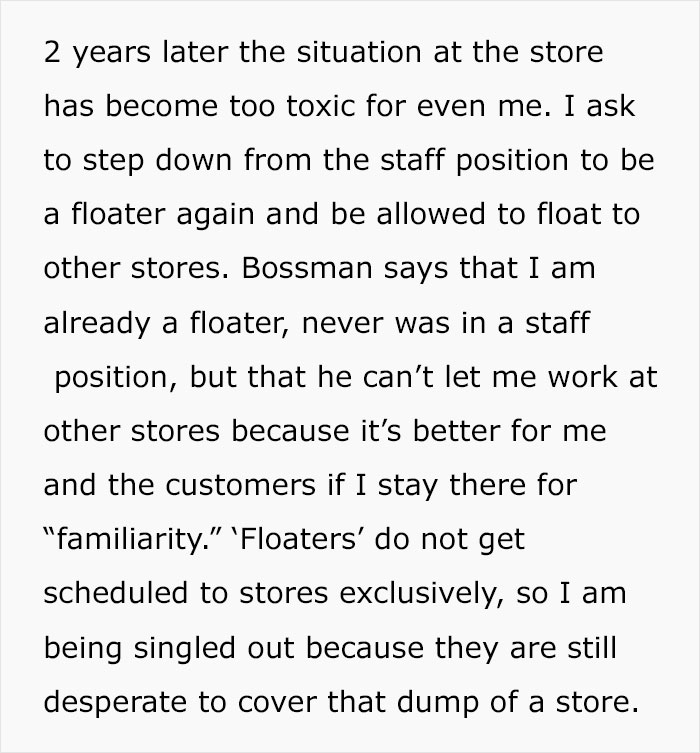 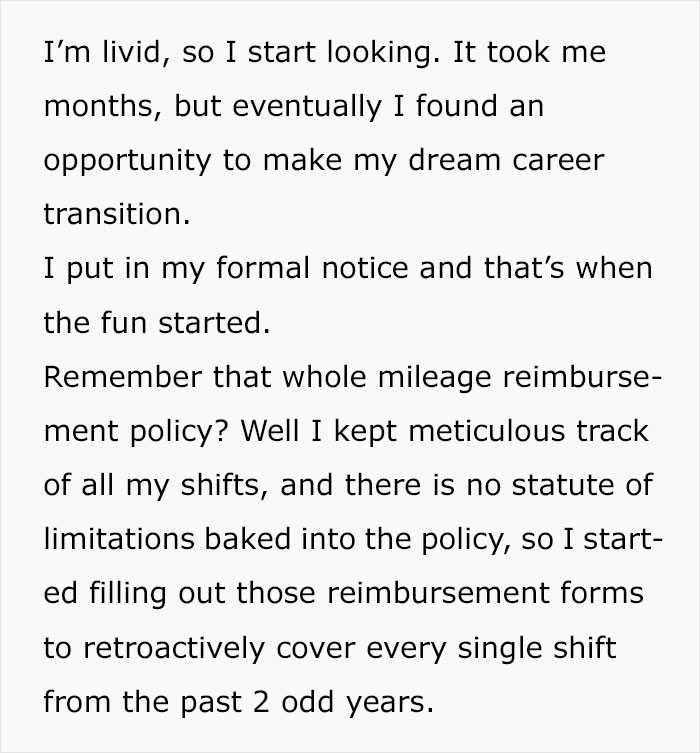 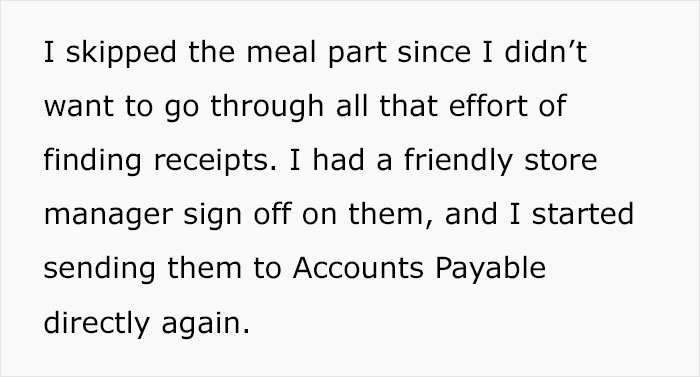 When the truth came out, the redditor started putting their plan of revenge into action 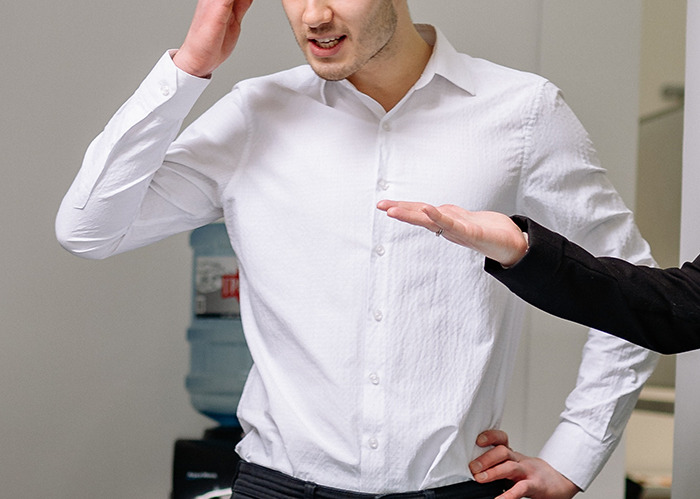 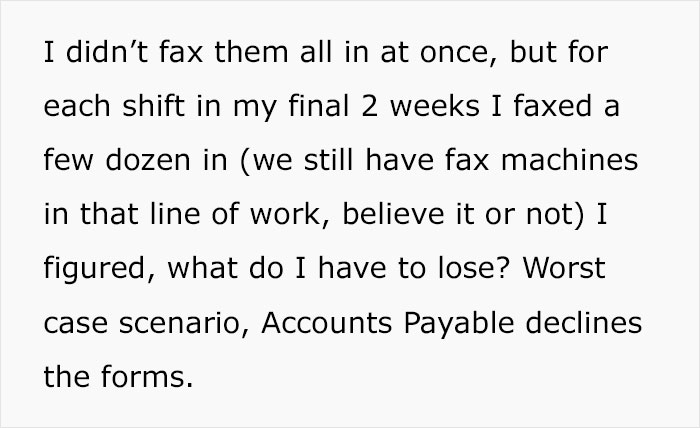 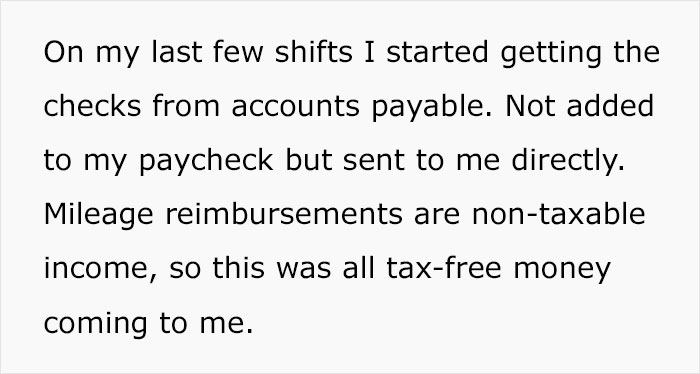 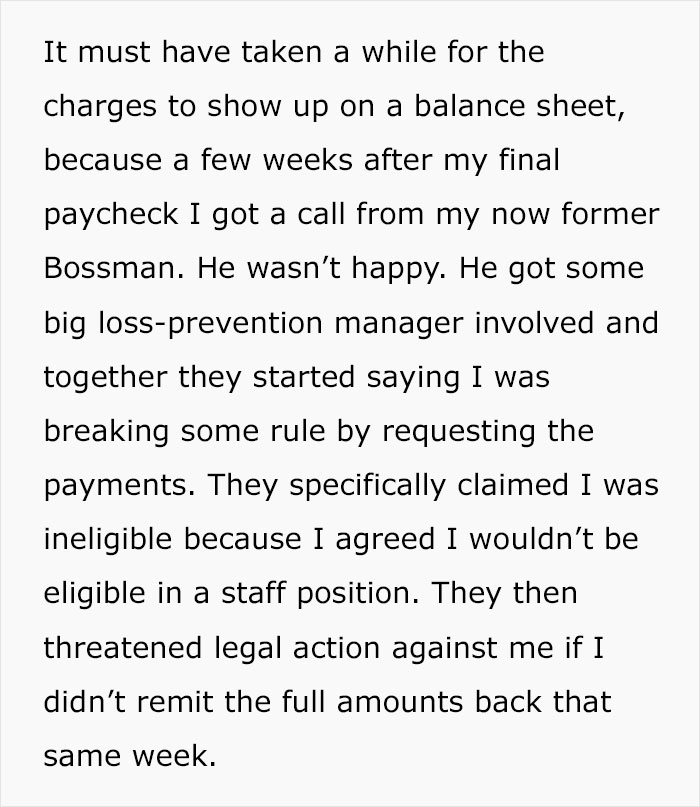 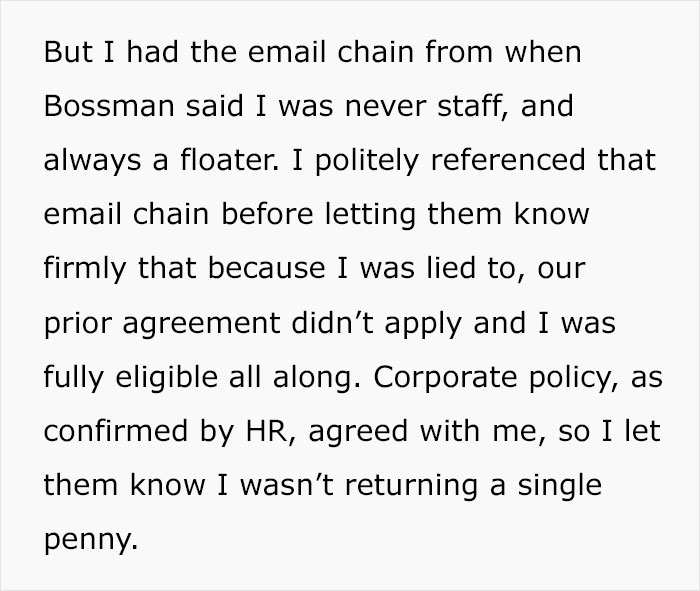 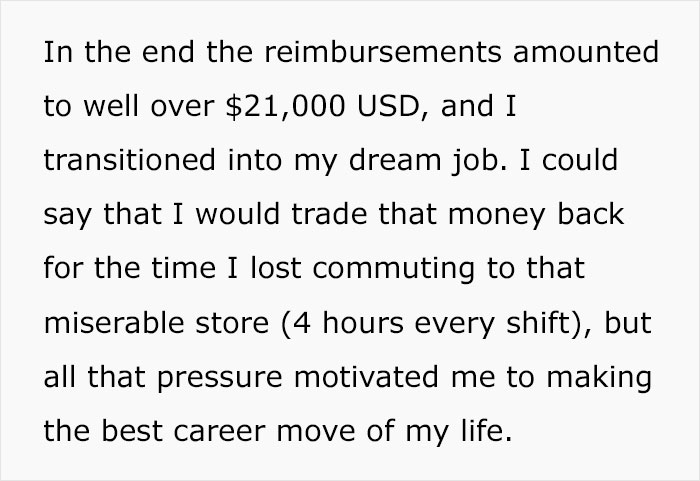 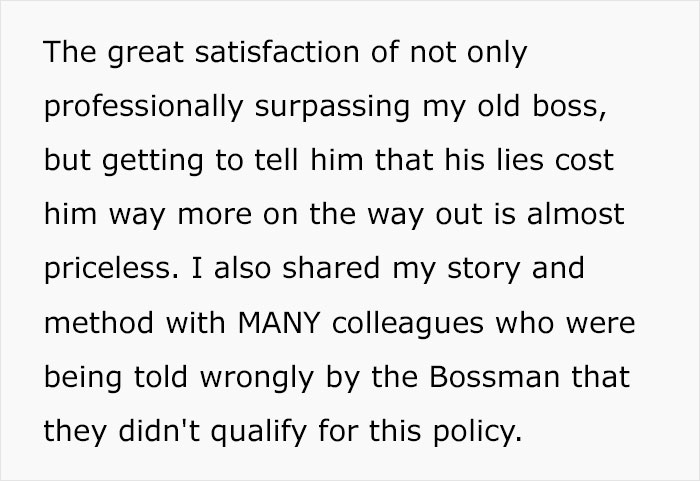 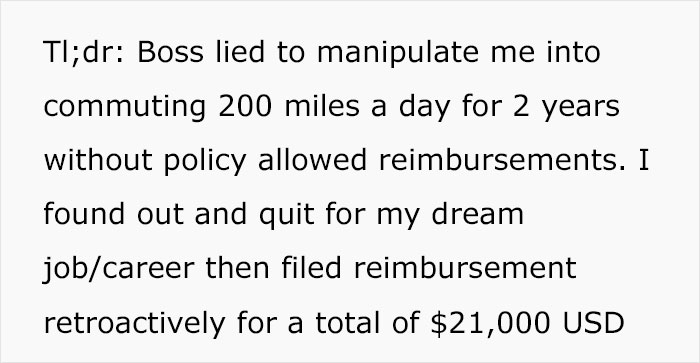 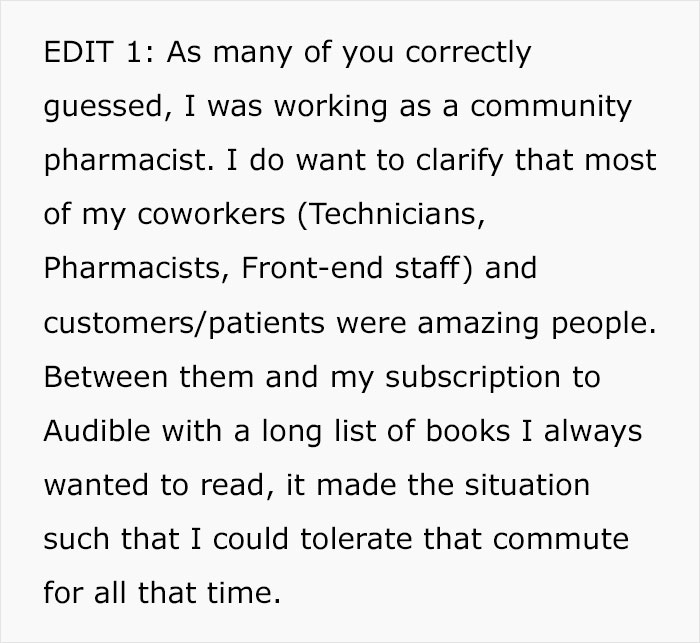 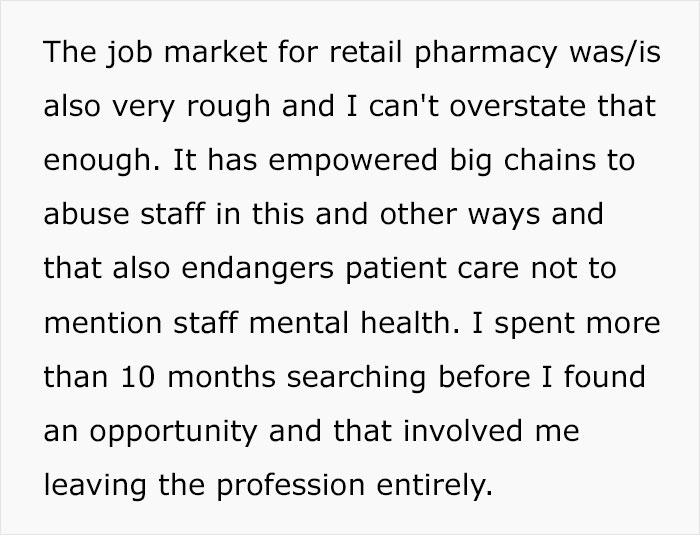 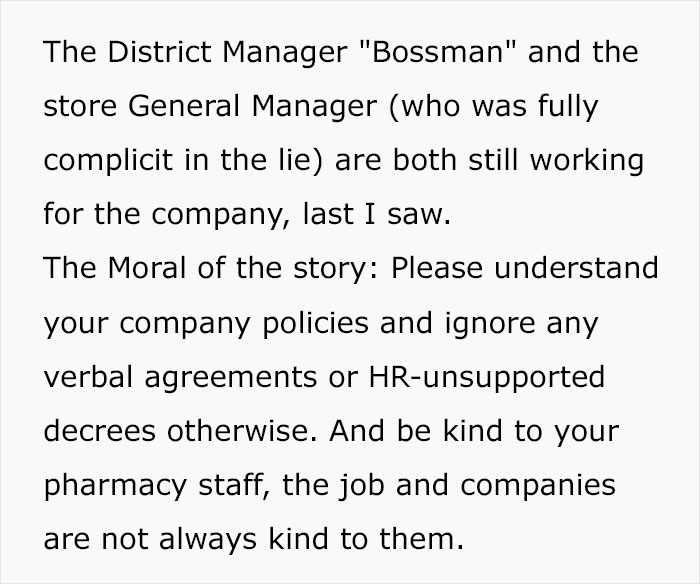 Redditor u/ClubWag, the author of the story, agreed with Bored Panda that it’s vital to keep a paper trail at work. “I didn’t manage my manager properly, and because I didn’t hold him to account to company policies, or keep his commitments to me, the situation became far more dramatic than it needed to be,” they drew upon their own experience to show what effects this might have under some very bad circumstances.

“Keeping a paper trail not only in the email communications, but also of my schedule is the only thing that enabled me to act to claim the reimbursements that were due to me, and deflect my boss’ continued deception. Had I not kept those records, my lying boss would have had the last laugh, not me,” they said.

u/ClubWag was happy to share some advice with our readers who might be in a similar situation as they were. In their opinion, it’s very important to know the rules of the game.

“The best advice I can give to anyone would be to make sure you read and understand your company policies when it relates to what you are entitled to. My boss had lied to me and most of my colleagues about not being eligible for the benefit and then lied to me about my position when I clarified with HR,” they said.

“Granted that this was a pretty terrible boss for other reasons as well, but at the first sign of manipulation and deception of his employees, I should have started looking for other employment. Even in a job market as saturated as pharmacy, no employer should ever lie to or abuse their staff, and neither should any employee tolerate that kind of treatment,” the redditor stressed that workers must be treated with respect.

“The money in the end, while not insignificant, wasn’t what I was proud of most. That would be my career change that I was motivated to undertake. Revenge by malicious compliance is sweet, but the sweetest revenge of all is moving on and living well,” u/ClubWag pointed out that it’s the immaterial things that came out of this entire messy business that were the biggest rewards.

In short, the redditor’s boss made a lot of work-related promises that turned out to be flat-out lies. Nobody should have to deal with something like that. And u/ClubWag had the perfect response. In fact, it was a maliciously compliant response: they retroactively filled in all of the mileage reimbursement forms because they weren’t bound by a statute of limitation.

That amounted to over 21k dollars that had to be reimbursed. Non-taxable, of course, which was the cherry on top. However, the big bad Bossman tried to intimidate the employee and even threatened legal action. That didn’t turn out so well because the redditor had proof, in writing, of the boss finally admitting that for the past two years, the employee wasn’t given the job position that was verbally agreed upon.

It’s not just the sense of justice and the money that were the redditor’s rewards. They also got to spread the word about the reimbursement policy to a lot of colleagues. Meanwhile, this entire nasty situation actually got them to make a great career move and actually surpass their boss.

Earlier, financial expert Sam Dogen told Bored Panda about the importance of leaving a paper trail and knowing how to manage your manager.

“Managing your manager entails keeping him or her abreast of what you are up to. It means highlighting your key wins and reminding them at the end of the year about what you did in the first half of the year,” he told us.

“It is very important to keep everything in writing. Over time, we tend to forget our interactions. By keeping things in writing, we can better remember situations and better argue for ourselves when it comes to asking for a raise and a promotion,” he said that this can help us when asking for a raise or solving any work-related issue.

Meanwhile, Eddy Ng, the Smith Professor of Equity and Inclusion at Queen’s University, explained to us that a strong leader is someone who always does the right thing and uses their principles and morals to guide their actions.

On the flip side, a weak leader is someone who dithers or only does the things that end up making them popular. While a strong leader is humble, a weak one might be insecure and egoistic.

“The notion of servant leadership is gaining attention in the workplace. Although it is associated with many of the strong leadership traits such as empathy, selflessness, and humility, the focus is on the leader’s propensity to serve (or support) their followers. Servant leaders empower and lift up followers (employees) to motivate and fuel their passion,” the professor told us.

Here’s what people had to say after reading the riveting story. Some of them shared their own similar experiences 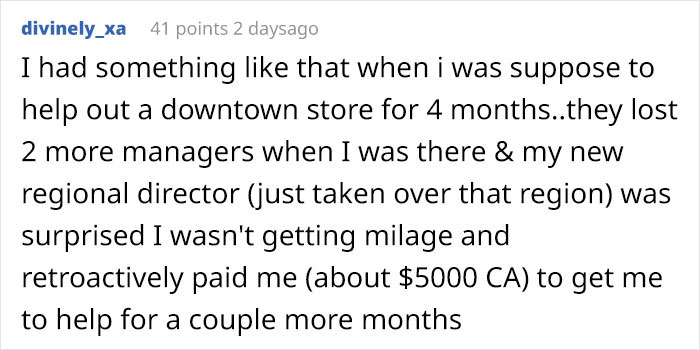 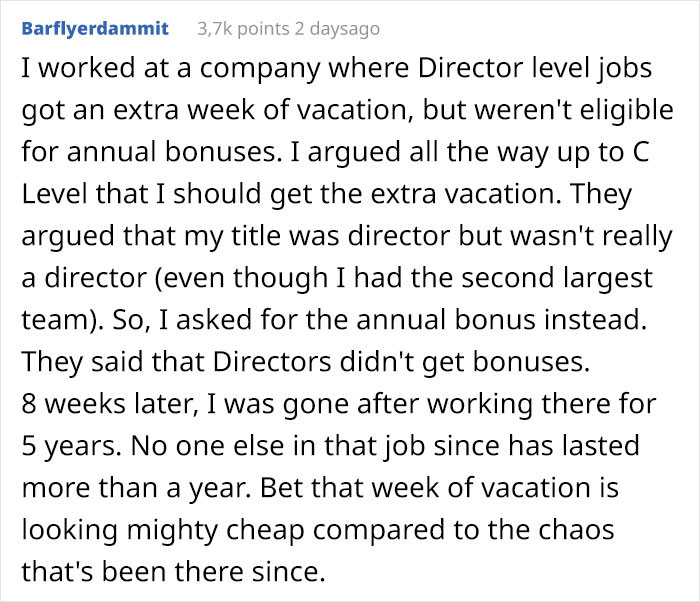 The post Boss Lies About This Person’s Position To Keep Them Away From Benefits, Regrets It When They Find Out first appeared on Bored Panda.