It’s early morning, you’re getting ready, brushing your hair. The sun is shining brightly through the window. It’s going to be a wonderful day. Suddenly, a sunbeam catches on a shiny white strand of hair, reflecting off the mirror and into your eye. You’re surprised at the sudden flicker of light and go in to take a closer look. What do you know – you’ve got your first gray hair.

To many women, this is not a joyous occasion. Considering the social stigma against aging, many decide to cover up their silver locks, despite them being a normal part of life. Although others embrace the gray and rock it! Just like this bride did for her wedding day.

Kadeja Jackson was getting ready to tie the knot with her husband-to-be Derrick Baker, but what caught people’s attention was her beautiful gray hair 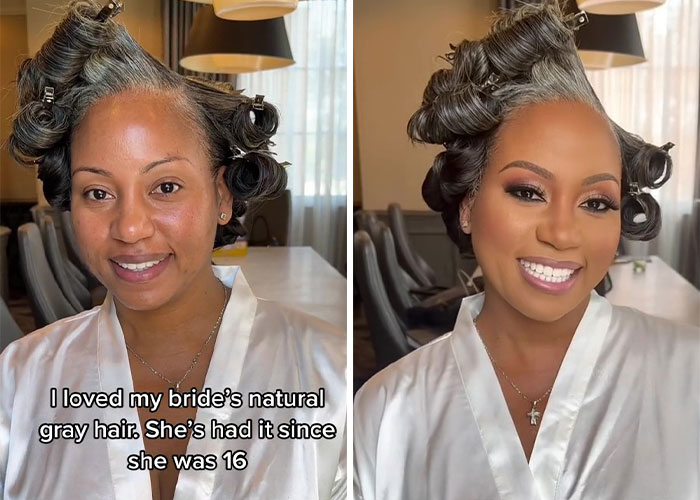 A beautiful woman, named Kadeja Jackson, was getting ready to celebrate one of the most wonderful days of her life – marrying her beloved, Derrick Baker, after 20 years of dating. The destination wedding at Hotel Colonnade in Coral Gables in Miami, Florida, was a spectacular occasion for friends and family to witness.

The newlyweds met in high school, but their love story could have started even earlier, as her sister tried to introduce them back in fifth grade. They share two sons, and getting married in June of this year “couldn’t have been a better time.” Kadeja explained that they could’ve gotten married all those years ago, but if they had, they wouldn’t have been able to have the wedding “of their dreams.” 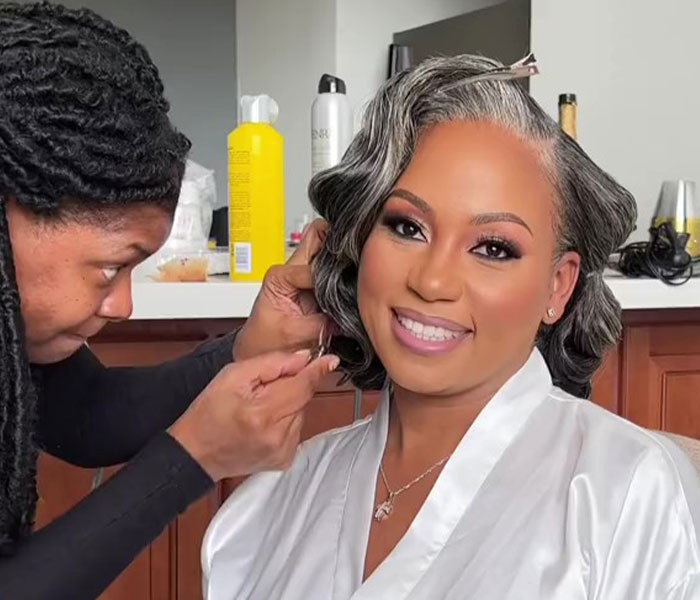 However, the lovely couple and the fantastic venue aren’t the reasons for this story going viral. It’s because the bride’s makeup artist, Tia Codrington – who is known as @mua_ttt_tia on social media – shared the story behind Kadeja’s hair on TikTok.

When she was just 16, her hair had started to turn gray. It was nothing short of a surprise. Learning to love her changing locks has been quite the journey, as Kadeja spent years dying it before deciding seven years ago that there was no point, as her roots were “going to turn gray regardless, so what was the point in continuing to damage [her] hair with hair dye?”

So she embraced it. Kadeja explained that accepting her natural color has been “empowering because you feel comfortable being yourself.” Her hair had been catching people’s attention long before her wedding, with some stopping her to ask what hair color she was using. “I’m like, ‘I’m not using a hair color. That’s my hair,’” she laughed. 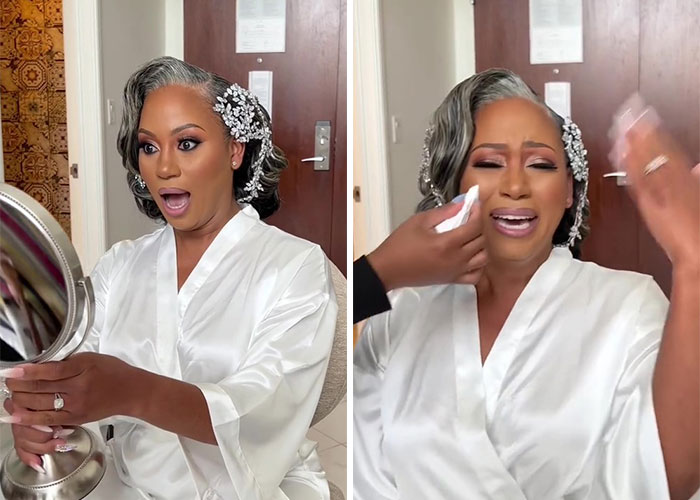 The road to acceptance was long, and she continued to dye her hair until she realized that “it was going to turn gray regardless,” so why continue damaging it? 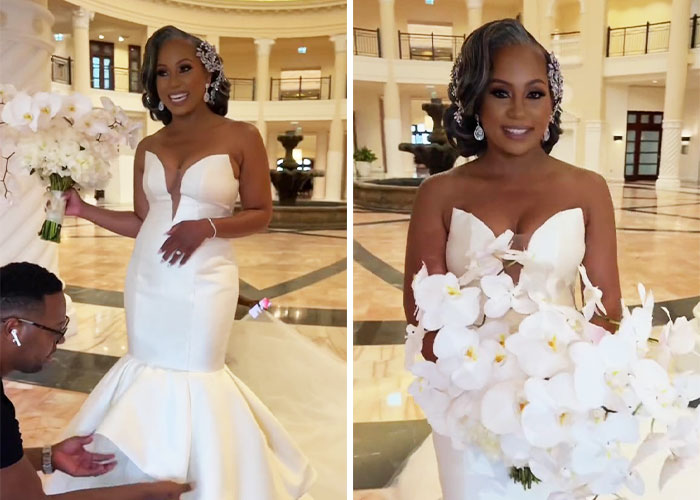 Tia told Insider that the first time she saw Kadeja’s hair, she said to herself: “This is definitely my type of bride, unapologetically true to themselves.” Ensuring the makeup worked with Jackson’s hair was key: “Since her hair was the main attraction for me, I was very intentional with every step of her makeup process, ensuring the whole look was cohesive.”

Martine Saintval styled the hair in old Hollywood-inspired finger waves adorned with crystal hairpieces. The hairdo was changed after the ceremony, with Kadeja’s long curly locks swaying freely on the dancefloor.

Embracing her natural hair has been incredibly empowering, allowing her to feel comfortable being herself 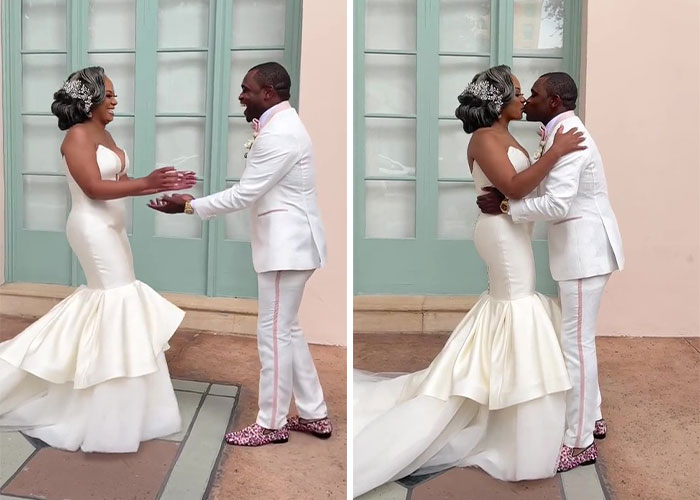 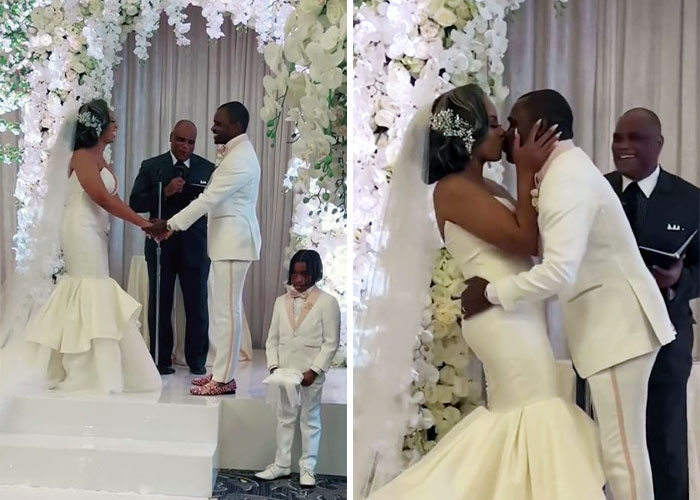 Kadeja’s wedding planner, Jarvis Lawhorn, told Insider that the final look was one of his all-time favorites. “We worked extremely hard to create a timeless regal and vintage classic bridal look. Kadeja is naturally a beautiful woman but on her wedding day she transformed into almost a regal queen,” he said. “Her natural gray hair color also added a different take on the usual and more common hair color.” Overall, she was “breathtaking.”

“I love the girls that stick to their roots,” Tia wrote in the video’s caption, which, at the point of writing, had racked up more than 1.3 million views and plenty of compliments regarding the bride’s look as a whole. The outstanding amount of praise was a shock to the bride. “I was totally taken off guard. I see myself every day, so it’s not a big deal,” Kadeja told Insider.

Tia not only worked as a makeup artist that day, but also as one of the videographers capturing the magic throughout the day, which she then shared in a series of posts on social media. From the bride getting ready and trying her best not to cry once she saw herself, to the first look with her husband, and then their kiss at the altar once they were declared husband and wife.

The footage has racked up more than 1.3 million views, and thousands of people messaged the bride to compliment her hair and the wedding as a whole 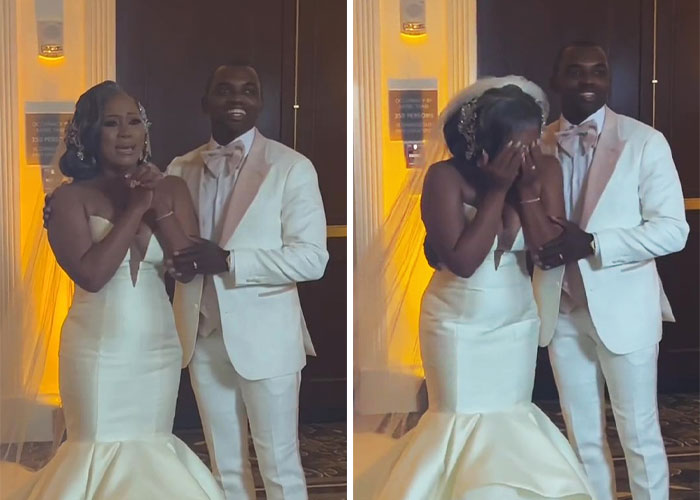 So why is it that gray hair has been so difficult to accept, especially since it doesn’t seem to affect men as much as it does women? Vanessa Cecil, a researcher at the Department of Psychology, University of Exeter, believes that men receive less stigma for gray hair. Whereas for men, gray hair lends itself towards the distinguished gentleman trope, functioning as a sign of maturity and intelligence, women with gray hair tend to face themes of incompetence and invisibility.

“In an ageist society one can see that aging women are similarly required both to mute the signs of age and to reverse cover by not appearing ‘too young’ for their age,” she argues, continuing to say: “Society demands that women remain looking young and attractive if they are to retain social status, but simultaneously that they ‘age gracefully’ – another common term – which deems as embarrassingly undignified any attempts to look youthful and implies that older women should gradually fade from view.” 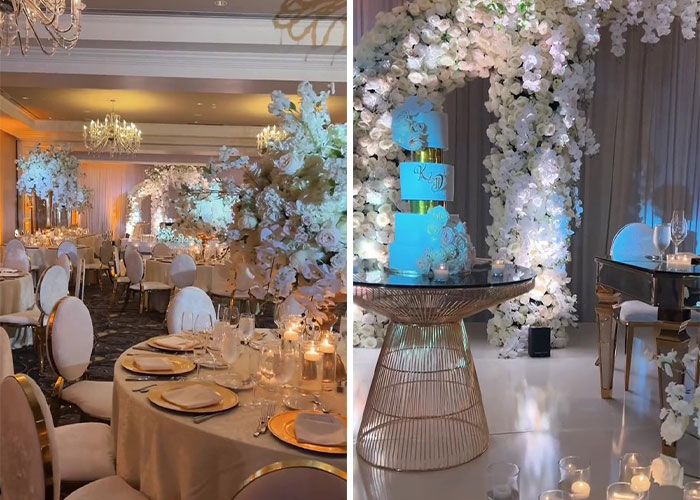 In one example shared by Naturtint, a black-and-white French L’Oreal ad from the 1920s showcased a sad and happy version of the same woman side by side, with the happy woman wearing a stylish black bob. The English translation for the ad read: “Not one more white hair; forever 30 years old.” The correlation between hair color and happiness cannot be understated.

Going gray can happen at any age, even as young as 10, yet the stigma remains. However, more and more women have started to embrace their gray hair in the past few decades, helping to spark a revolution where gray hair is accepted and even celebrated. 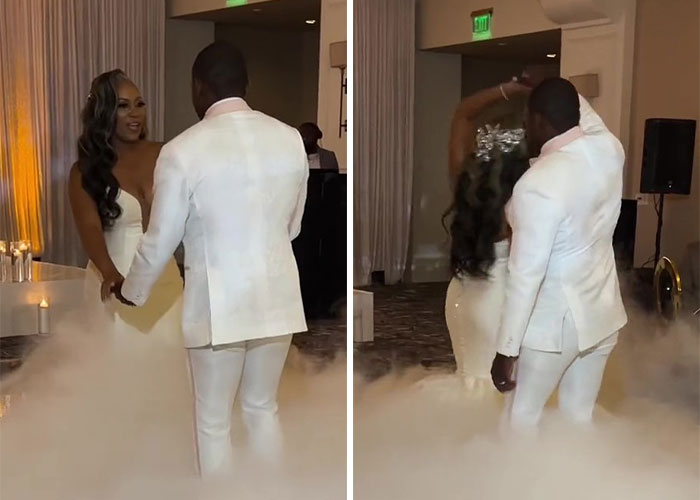 My personal view – do what makes you happy. If you’re happy with your gray hair – don’t let societal expectations make you feel otherwise. If having blue or red or rainbow hair makes you happy – power to you! The less we judge, the happier we will end up being, both individually and as a society. And age is nothing to be ashamed of.

@mua_ttt_tia I love the girls that stick to their roots

We wish the newlyweds all the sunshine and happiness possible in the years to come and we can’t wait to see what the future holds for them! Let us know your thoughts on the story in the comments below, and I shall wish you a bright and beautiful day!

Thousands of people have sent praise and love to the pair and the beautiful bride. Let us know your thoughts and opinions in the comments below!

The post Bride Goes Viral After Embracing Her Natural Hair Color On Her Wedding Day first appeared on Bored Panda.