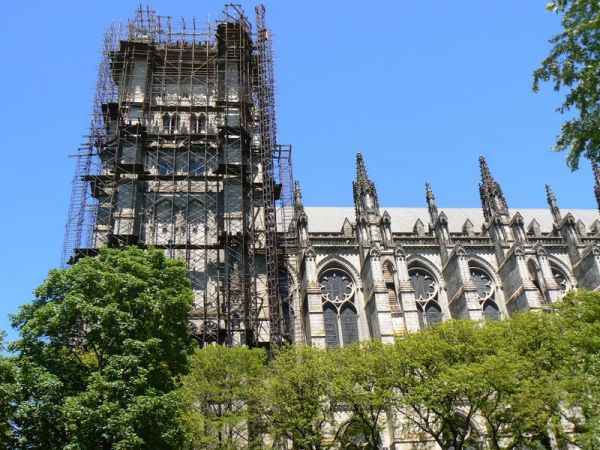 When fire broke out at Notre Dame cathedral last month, we learned it was being remodeled and repaired -as it had been on and off for hundreds of years. Many Gothic cathedrals in Europe spent centuries under construction, and quite a few are still not completed. You can be sure that as soon as they are, there will be remodels and repairs planned. Cathedral construction has always been a quest to be the biggest and the best, which undercuts any plan to get it done quickly and/or economically. An American example is the cathedral of St. John the Divine in New York City, which is still incomplete more than 100 years after breaking ground. Breaking ground itself was a bigger project than was planned.

Ground broke on December 27, 1892, and almost immediately it became clear just how many unknowns the project would hold. Workers discovered that – unlike at St. Luke’s across the street – there was nothing solid to build on. Excavation revealed loose rock, compressible earth, and underground springs. Workers had to dig 72 feet down before they hit bedrock, by which point said springs had turned the hole into a lake. It would take ten years before they drained the hole and built back up the foundation.

The choir called for eight massive granite columns: each 54 feet tall, six feet in diameter, and weighing 160 tons. To cut the 310 ton blanks down to size, the church commissioned Philadelphia Roll and Machine Works to build a custom 135 ton, 86-foot-long lathe at the cost of $50,000 (in today’s dollars, $1.5 million). To transport them from Vinalhaven Maine required a specially built barge.

Construction continued through wars, recessions, and the deaths of those responsible for both financing and building the cathedral. Read the saga of St. John the Divine cathedral at The Prepared. -via Metafilter