Can you remember your 23rd birthday? I’m not sure I can, as I was finishing up my studies and drowning in various types of alcohol alongside my friends. No regrets. But also, don’t mix wine with anything. You’re welcome for that bit of knowledge. But what does a birthday party for a dog look like?

We’ve seen examples of celebrations in previous Bored Panda articles, which can be found right here. And today I will bring you another one! Truly a momentous occasion as a pup reaches an astounding milestone of 23 years, which, for dogs, is the equivalent of over 100 years old! Fantastic stuff! Let’s get into the story.

Happy birthday to Bully the Chihuahua, celebrating 23 beautiful years with his family! 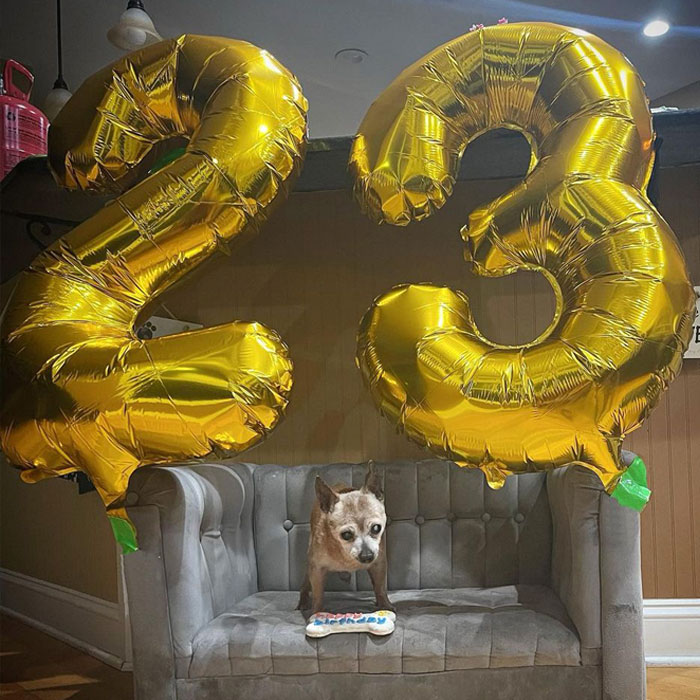 Bully the Chihuahua recently celebrated his 23rd birthday, and whilst most young adults his age are finishing up with university and thinking about their future, Bully is happy to be a 104-year-old elder (as calculated into human years), taking naps and eating snacks.

No birthday should go without a celebration and Bully’s current owners threw him a party no one will ever forget: big balloons, a bone-shaped treat with fancy icing to say ‘Happy Birthday’ and lots of celebratory snoozes to crown the occasion with.

Chris Hughes and his wife Mariesa have been taking care of the little pupper in their private senior dog rescue, called ‘The Mr. Mo Project’. The super senior is one among other 4 elderly pups aged 20 and over. 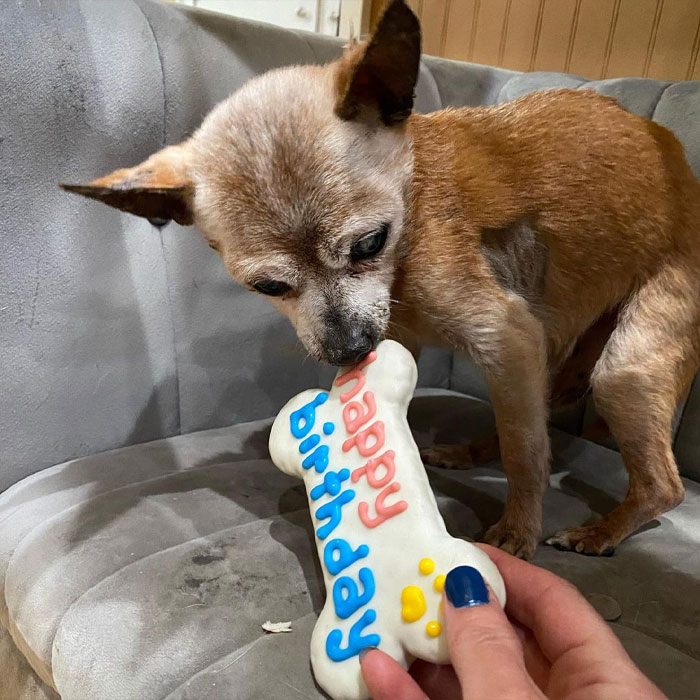 The charismatic puppy was born on April 5, 1999, and adopted by his first family that loved him for 21 years 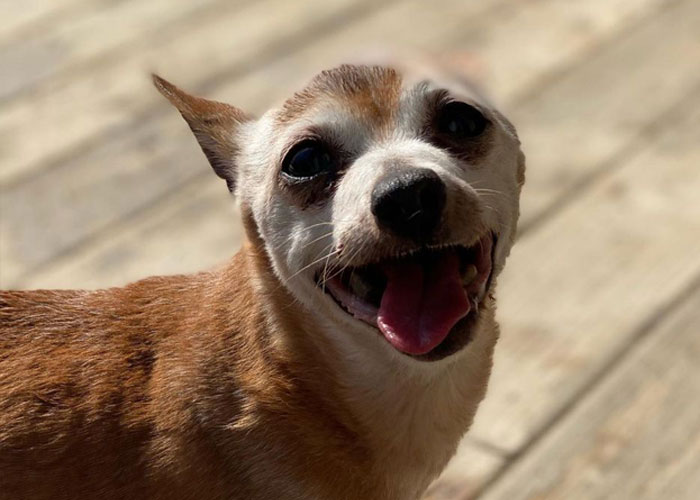 Let’s look at Bully’s life story. Born on April 5, 1999, Bully’s had a very fun life and we’re sure he’d agree that the early 2000s were a heck of a time. He began his life with a loving family, enjoying the companionship of his humans, playing outside and going for runs in the local park, making lots of friends. When his elderly owner could no longer manage to care for him, Bully found a new home with Chris and Mariesa at the rescue.

His former owner told The Dodo that Bully is a “big dog in a little dog’s body,” and Chris quickly realized that despite Bully’s age, he hadn’t changed one bit from the young pup he once was. He said that “Bully is feisty, naughty, sweet, independent, gentle, calm and he has an old man bark.” But even at 23, he won’t hesitate to push around the other Chihuahuas residing at the home.

Sadly, his elderly owner couldn’t take care of him any more and he found his way into the hearts of the Hughes family 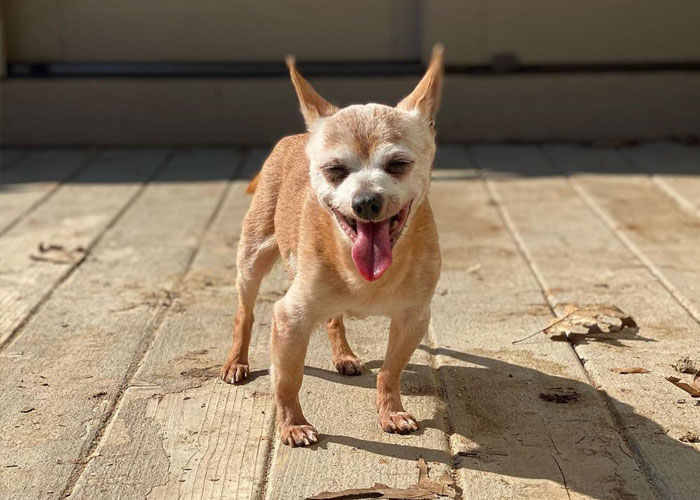 The Hughes run a non-profit rescue, called the Mr. Mo Project, uniting all senior pups in the hopes of providing a happy and safe home 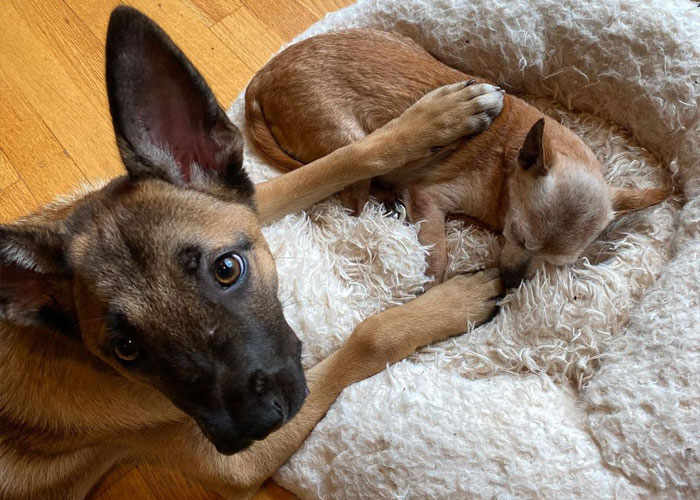 Regardless of his big personality, Bully’s age is catching up to him. He needs more rest than the average puppy, Chris saying, “he will fall asleep absolutely anywhere, sometimes on the middle of the floor in the kitchen, on a potty pad or on the biggest, most comfortable bed in the corner.” And therefore, the best thing they could give the doggo was a good birthday sleep, as well as a soft crumbly biscuit for the senior to enjoy.

The family has fallen in love with Bully and his little antics, writing in an Instagram post, “When he came to us I, honestly, didn’t want to add another dog to our pack, especially a 21 year old, unaltered dog, and a chihuahua at that. But you know what? The universe must have known we needed Bully because this dog brings us so much joy, I can’t even imagine my life without him now.” 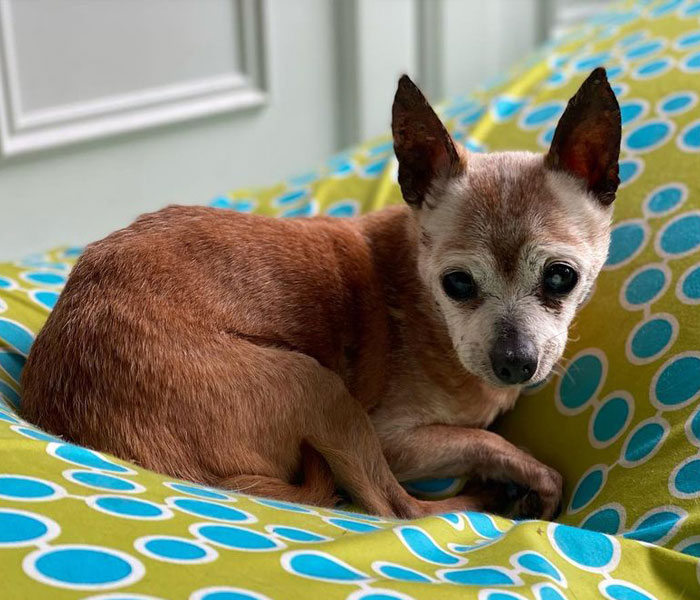 The birthday post garnered a lot of attention, gifts and donations coming from fans and companies alike 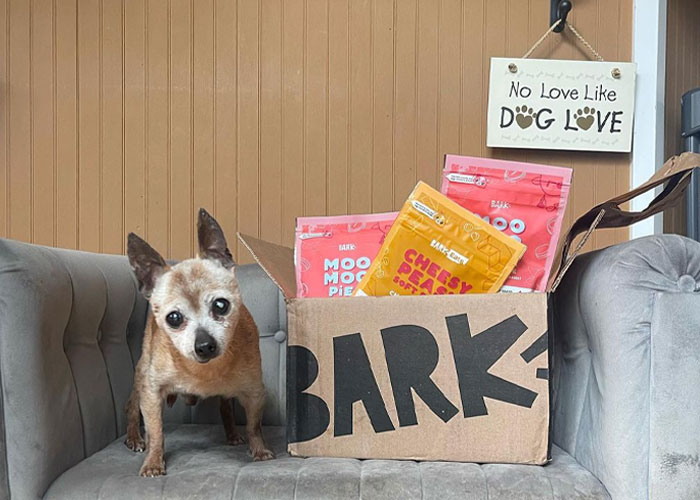 But the family aren’t the only ones loving Bully. The birthday post garnered 10k likes and thousands of people sending their best wishes to the pup. Donations and gifts started coming in, as well as a surprise giftbox from Barkbox, specializing in a monthly subscription of toys, treats, and chews to thrill your dog.

The family wrote on Instagram, saying, “Bully woke up happy from a nap today when we told him how many people had wished him a Happy 23rd Birthday!! Thanks so much for thinking of our old man.” 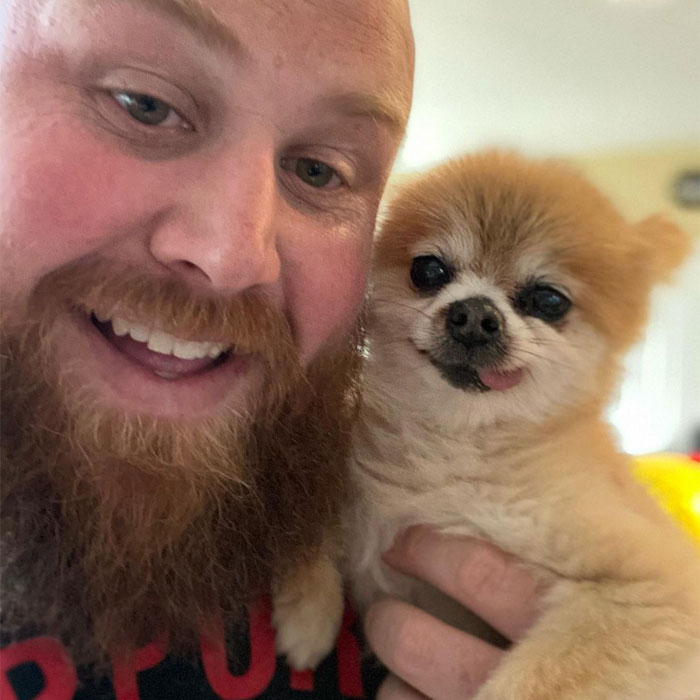 Bully isn’t the only dog to be getting birthday parties. The family makes sure each puppy is celebrated, whether that be for finishing chemo treatments, adoptions, Christmas and many other occasions. As Chris put it, “we try to celebrate all the great things that happen in our home because so often there are not-so-great things that happen.”

The rescue’s mission has always been to save senior dogs nationwide from living in shelters, or worse, being euthanized: “We believe that senior dogs deserve homes too!” And loving ones at that. It is named in honor of their late senior dog Mr. Mo, who inspired the non-profit as a whole.

Chris and Mariesa started the non-profit fight to save senior shelter dogs nationwide and to honor the life of their late and beloved senior dog, Mr. Mo 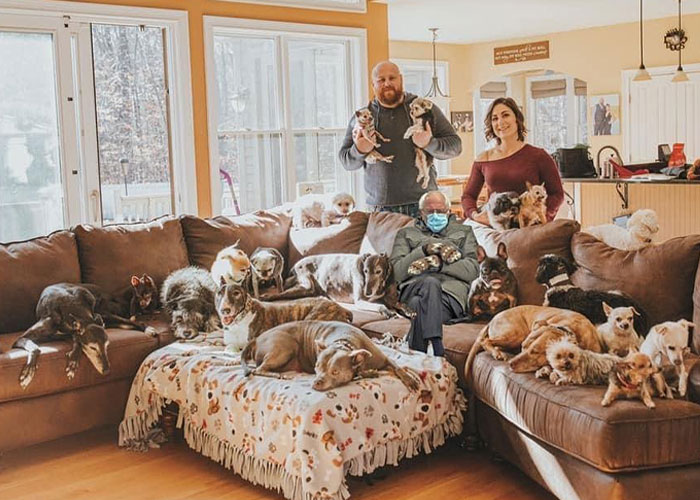 For a dog to reach the age of 23 is no ordinary feat, but why do some dogs live longer than others? 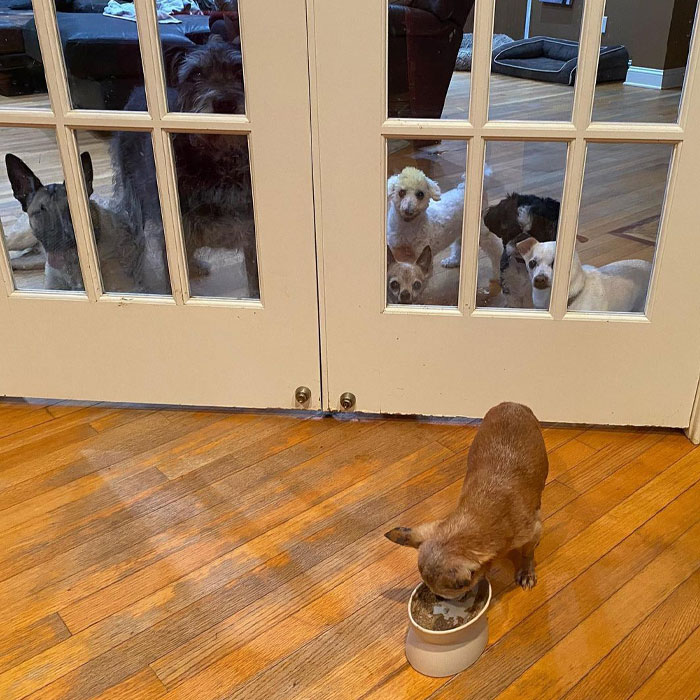 Whether the math regarding the dog to human years is fully correct is unclear, because most tend to stop the dog-human age calculators at 20. Chihuahuas are a breed of pups that tend to have some of the longest lifespans but, even so, 23 is incredible. But why do small dogs tend to live so much longer than their larger brothers and sisters?

According to Dr. Andrew Miller, dogs live on average for 10 to 13 years, with this depreciating as the dog gets bigger, making your choice in pup quite significant, as you essentially sign up for a set amount of time with them.

Professor Mark Elgar of the University of Melbourne’s School of Biosciences says that research comparing size and age-related mortality in dogs shows that larger dogs die younger because they age significantly faster than smaller dogs. 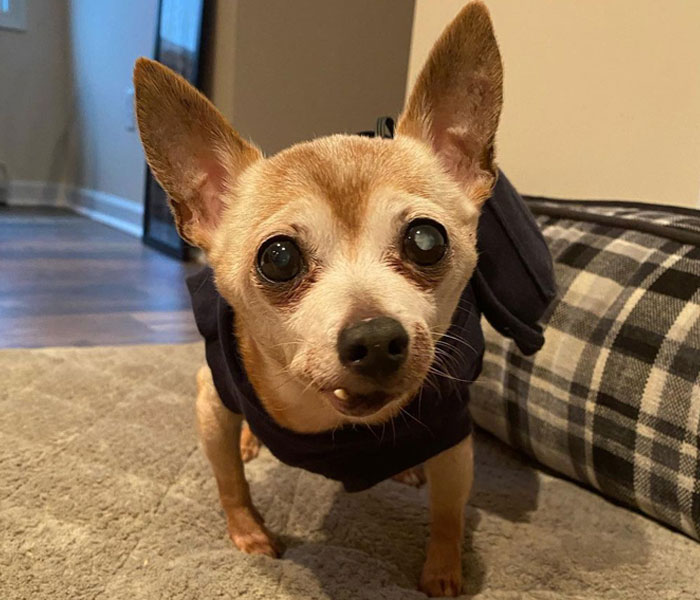 A larger dog, because of its size, may put more strain on its physiological processes, meaning they tend to wear out more quickly: “Modern cars generally work well for eight or nine years, and then wear and tear sets in and they start falling apart. The speed with which they deteriorate varies between manufacturers. It’s the same with dogs.” 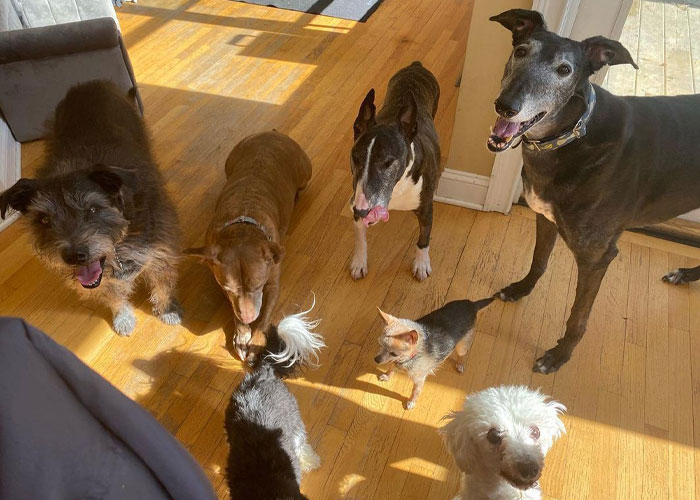 Dog morbidity rate is also impacted, as it is for humans, by lifestyle. PetMD has a very comprehensive and helpful list for anyone wanting their beloved pets to live as long as possible and here are some of their tips.

Don’t let your pet gain too much weight. Dr. Shari Brown, a veterinarian in Chesapeake, Virginia, notes that letting your dog get too heavy can not only reduce his lifespan but also his quality of life. So save those table scraps and don’t use your pup as a trash can.

Dental care and annual checkups are a must, as small issues can become life-changing quite quickly. Encourage exercise but don’t push your breed too far as each has different exercise requirements. And socialize your pups, as a lack of human interaction, playtime and love can lead to depression.

Lastly – spay or neuter your dogs. The process might be a pain and, in some cases, it can be dangerous, however, the benefits outnumber the negatives. Dr Mahaney states that “spaying and neutering is still the best way to guarantee reducing the risk of several cancers, let alone the behavioral issues you can see with intact dogs.” 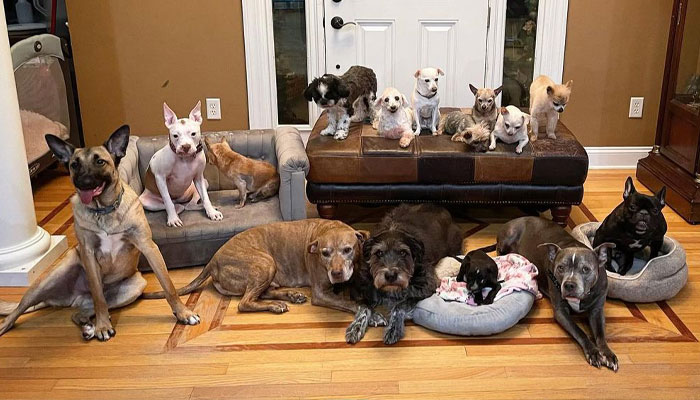 So let’s take care of our little four-legged friends, celebrate their lives and the love they bring to us. We wish Bully a late happy birthday and believe that he’s living his best life surrounded by friends in both human and dog form. Who knows, maybe Bully will be documented as the oldest dog in The Guinness World Records, but it remains to be seen.

If you’d like to donate to the Mr. Mo Project, I will leave a link here.

Let us know what you thought of the story in the comments. And also, as is common for these heartwarming stories, leave a “good pupper” in the comments to make my day better. Thanks so much for reading, if it’s your birthday – happy birthday! And I hope you have a fab day!

People have loved the story, sending best wishes to Bully and his family. Leave your thoughts in the comments!

The post Bully, The Chihuahua, Celebrates His 23rd Birthday With His Rescue Family first appeared on Bored Panda.