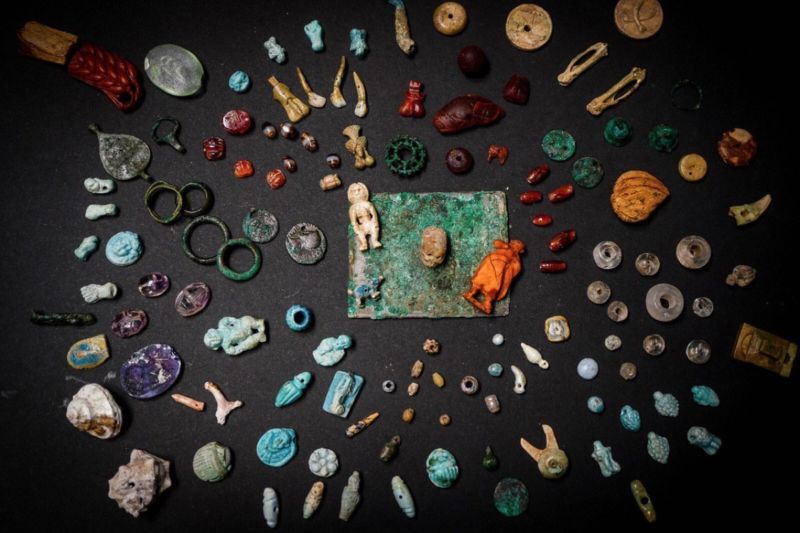 Many artifacts from an excavation site at Pompeii were recently uncovered by archaeologists. Among the many artifacts uncovered were “crystals, amber, amethyst, phallic amulets, glass beads, figurines, and a miniature human skull.”

The objects were probably left behind by someone fleeing the famous volcanic eruption in 79 AD—possibly even a sorceress. The various objects will be displayed at the Palastra Grande in Pompeii later this year.

“They are objects of everyday life in the female world and are extraordinary because they tell micro-stories and biographies of the inhabitants of the city who tried to escape the eruption,” Massimo Osanna, general director of the Archaaological Park of Pompeii, said in a statement.

The catastrophic eruption of Mount Vesuvius in 79 AD wiped out several nearby towns and killed thousands of people. The eruption released 100,000 times the thermal energy of the atomic bombs dropped on Hiroshima and Nagasaki in 1945, ejecting many tons of molten rock, pumice, and hot ash over the course of two days. In the first phase, immediately after the eruption, a long column of ash and pumice blanketed the surrounding towns, most notably Pompeii and Herculaneum. By late night or early morning, pyroclastic flows (fast-moving hot ash, lava fragments, and gases) swept through and obliterated what remained, leaving the bodies of the victims frozen in seeming suspended action.

Find out more about this exciting news over at Ars Technica.