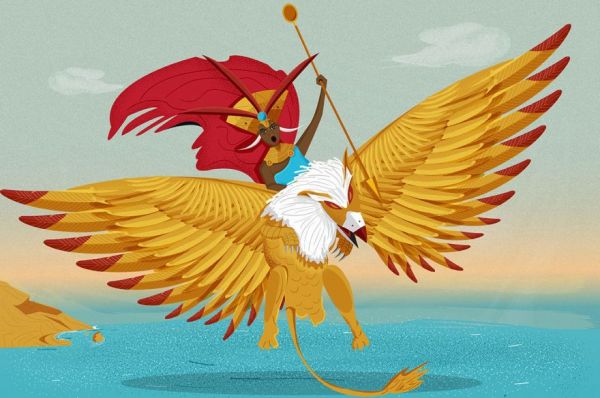 The name California was given to the west coast of the New World by Hernán Cortés’s conquistadors as they charged through, destroying the Aztec Empire and claiming territory. The name was taken from a Spanish novel, Las sergas de Esplandián by Garci Rodríguez de Montalvo, written sometime around the year 1500. The story tells of the fictional island of California and its queen Calafia.

At least initially, Queen Calafia seems like she could have sprung from the pages of a modern fantasy novel, ruling a kingdom that wouldn’t have been out of place in Westeros or Middle Earth. Her island, located “on the right side of the Indies, very close to … the Terrestrial Paradise,” is filled with gold and inhabited only by Black women, who tame wild griffins to ride into battle (fed with the flesh of any unfortunate men who show up). Calafia herself is described as beautiful, strong, and courageous. The book portrays her in an unfailingly positive light, though it ultimately places her under the control of medieval European patriarchy.

The novel is an example of a “crusade romance” in which the Gospel is proclaimed to the faraway and exotic people of the world. A closer look at the book as well as its context and influence tell us a lot about medieval attitudes about race and religion as the Age of Exploration dawned.