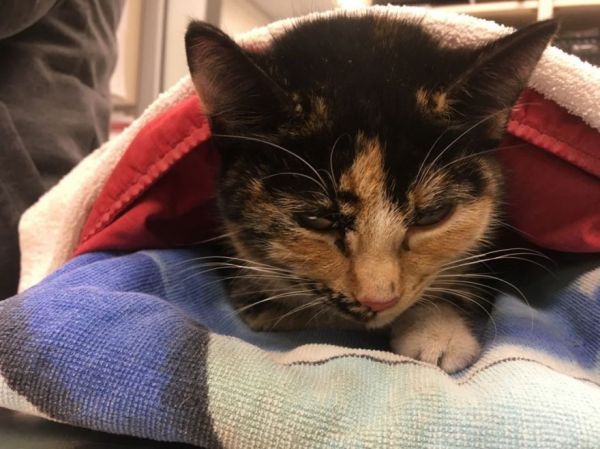 Last month, a truck driver in British Columbia witnessed an oncoming vehicle run over a cat in the road. The truck driver stopped and found that the small cat was not only injured, but was frozen to the road! He took her to the nearest veterinary clinic, and she is now in the custody of the SPCA.

It’s believed the female cat had been wandering and became hypothermic before collapsing in the middle of the road, where she became frozen to the pavement.

Once in the care of BC SPCA in Fort St. John, where the cat was given fluids and placed in a warming tent, she gradually became bright and alert, allowing the staff to continue their assessment of her other serious injuries which include a severely fractured knee, skin wounds and road rash. The estimated cost for ongoing care is $2,500.

The cat, which doesn’t have a name yet, is “extremely friendly and was purring and kneading the vet’s smocks as soon as she began to recover from her hypothermia,” the BC SPCA said.

A public request for funding the cat’s care has far exceeded its goal by raising $15,000. For now, the SPCA is calling her the Ice Road Kitten, and asked the public to suggest a name. The finalists are “Elsa” and “Miracle.” You can read the story of the ice road cat rescue at the Aldergrove Star. -via Fark