When it comes to the debate over who grinds away more at work, few things get people more worked up than comparing employees with kids and without. After all, it’s no secret that working parents have to juggle a lot because creating schedules that find the perfect balance between meetings and field trips is quite a daunting task. But when childfree co-workers have to work harder to pick up their slack, tensions inevitably arise.

This stands at the center of a dilemma Redditor randome_5682984 has recently found herself in. As the 28-year-old non-parent shared in a post on the AITA community, she is sick and tired of her “always pregnant” colleague who uses her children as a free pass to get out of work commitments she’s not inclined to do.

So when the mother-of-five tried yet again to pawn off her tasks on the user, she refused to cover for her — and was met with resentment. Unsure of what to think of the situation, the childfree woman reached out online to gain perspective on whether she was wrong or not. Scroll down to read the story in full, as well as the reactions that followed, and be sure to weigh in on the discussion in the comments.

Recently, a 28-year-old childfree woman shared how her co-worker uses her kids as an excuse to not work as hard as the rest 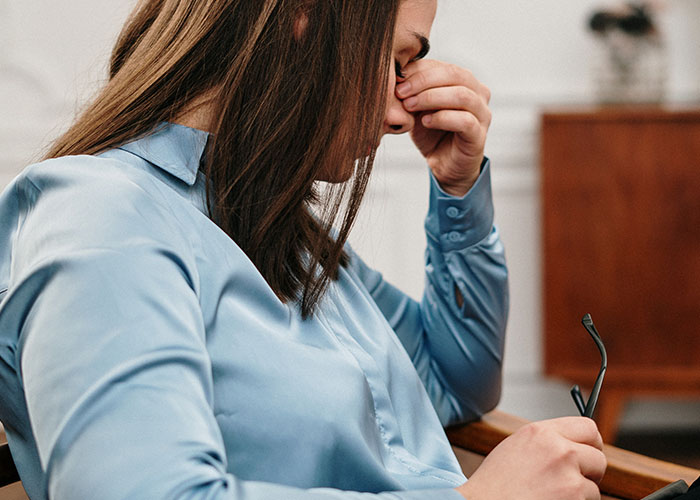 Feeling sick and tired of this behavior, she decided to stand up for herself 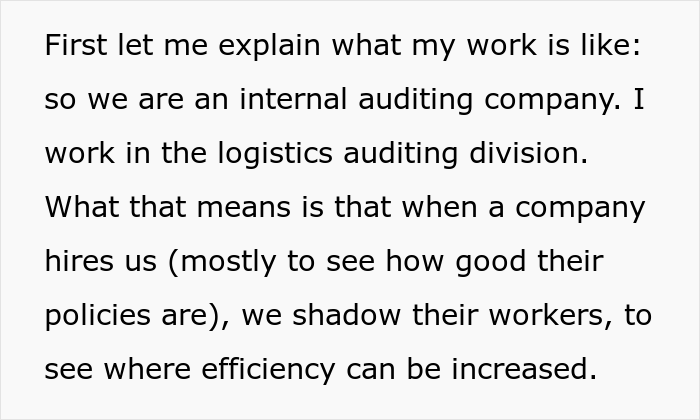 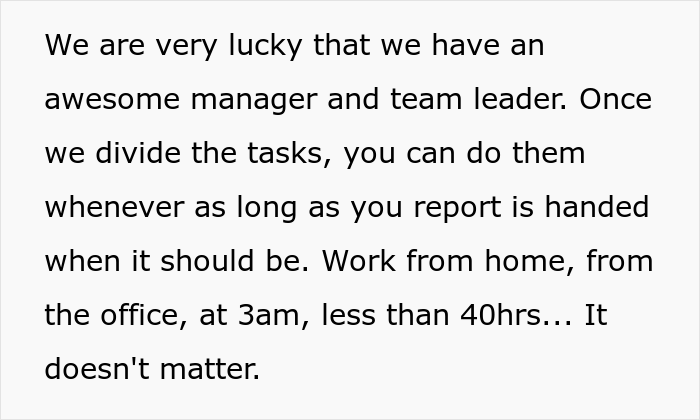 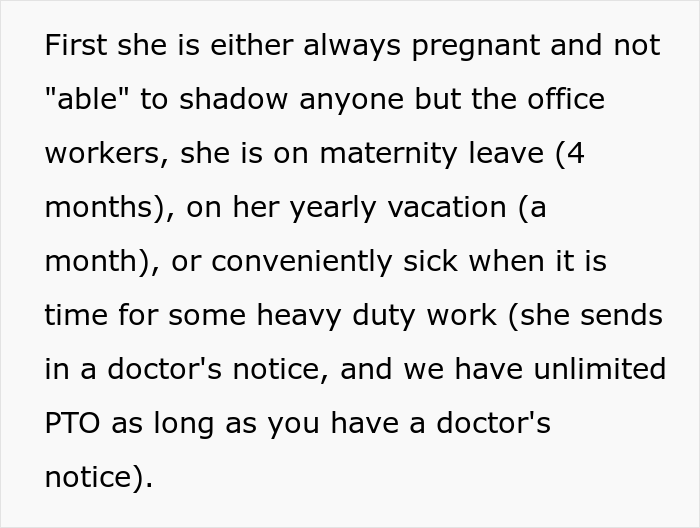 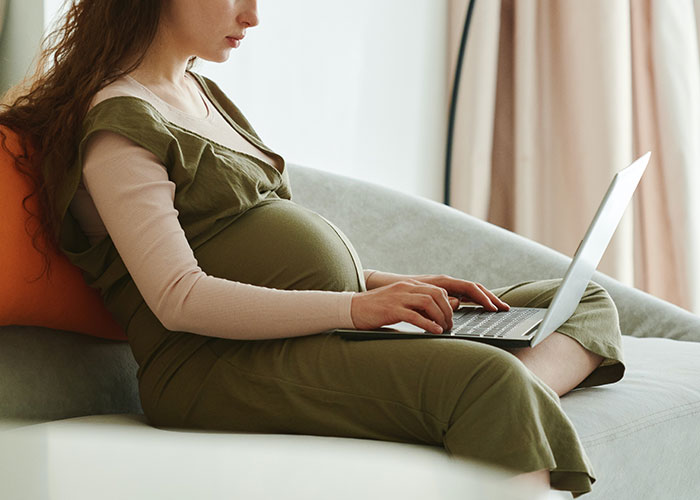 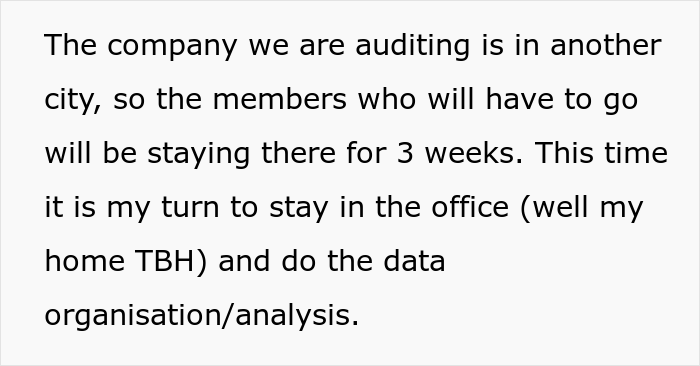 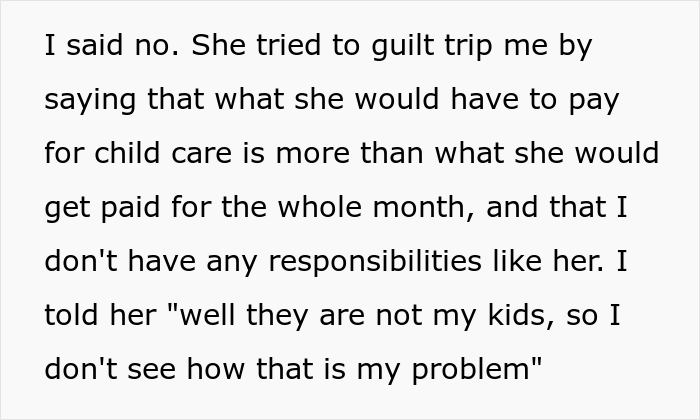 The share of people without children and who never felt the urge to have children is growing, so conflicts like this might be more common than we think. According to Pew Research Center, 44% of American non-parents aged 18 to 49 said they’re unlikely or “not too likely” to have children — ever. In England and Wales, women who turned 45 in 2018 were twice as likely (19%) not to have children as their mothers’ generation (9%).

Despite these growing numbers, childfree people still encounter unfair treatment at work. Some report being stressed and burned out because they’re expected to do more. At the same time, they face certain barriers. Researchers from George Washington University and the University of Pennsylvania found that analytically-talented, single professional women are disadvantaged even early in their careers.

This happens because they are often stereotyped as lacking leadership abilities and are often seen as too “masculine” for leadership — the same traits that benefit single men. Moreover, according to the study, they also lacked the “communal, relational” leadership qualities expected of women who were coupled and had children.

Erin Spurling, a writer, editor, and founder of Curiously Childfree explained to Bored Panda in an earlier interview that the decision to opt out of parenthood is often hard to grasp for people who see kids as a crucial part of having a fulfilled family. “A very prescriptive view of life has been presented for such a long time. Life is typically seen as — grow up, get married, buy a house, have children. Lots of people don’t consider something outside of that norm,” she explained.

According to Erin, childfree people face double standards at work because they are generally viewed as having more time, no responsibilities, and lots of flexibility. However, people tend to forget that those without children also have other commitments: second jobs, caring for relatives, volunteering, pets, hobbies, and more.

“But there is also an attitude that caring for children is more important than anything a childfree person might be involved with in their life, which can be frustrating. It can make you feel like you’re not valued, your time isn’t important and your choices aren’t respected.”

The founder of Curiously Childfree even mentioned she stumbled upon a job ad that stated parents get an extra week’s leave every year. “That could be hard to accept as a childfree person, but I would argue it might be even harder for a childless person who very much wanted to have children but then couldn’t, and now they find themselves covering the extra workload of those lucky enough to have been successful in their choice to have children.”

She continued: “I do think it can be true that we have more flexibility. … But I don’t think that means we should be expected to cover work for those who do have children.”

One way to try and change these attitudes is to set healthy boundaries, so Erin advised you to stand your ground — but not in a confrontational way. “When you find yourself being judged or devalued because of your choice, it can be easy to quickly become defensive in these situations but discussing it calmly will be far more helpful to both sides.”

“It’s not that childfree people can’t or don’t want to help if a colleague needs to leave because a child is unwell for example, it’s about that help being a two-way street. Sticking to your own boundaries can be tough but once you start doing it, it does become easier, people will adjust and you will feel happier because you’ll be living within your own limits,” Erin concluded.

Readers unanimously agreed the author of the post was being totally reasonable, here’s what they had to say 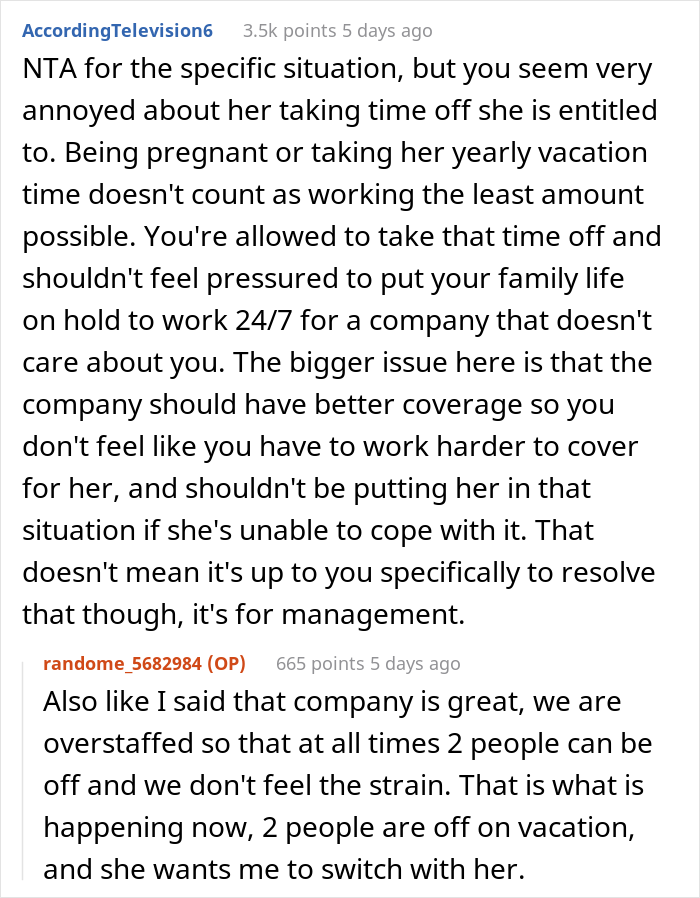 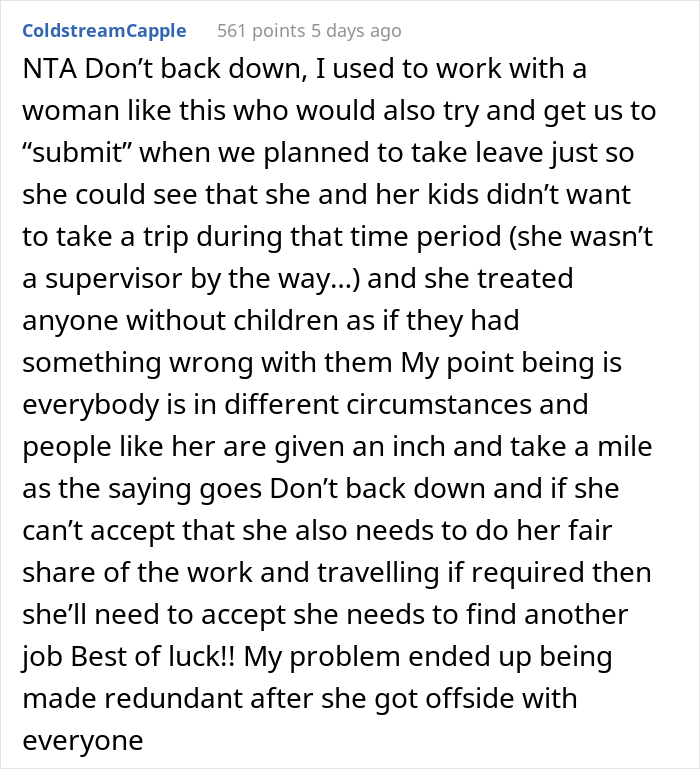 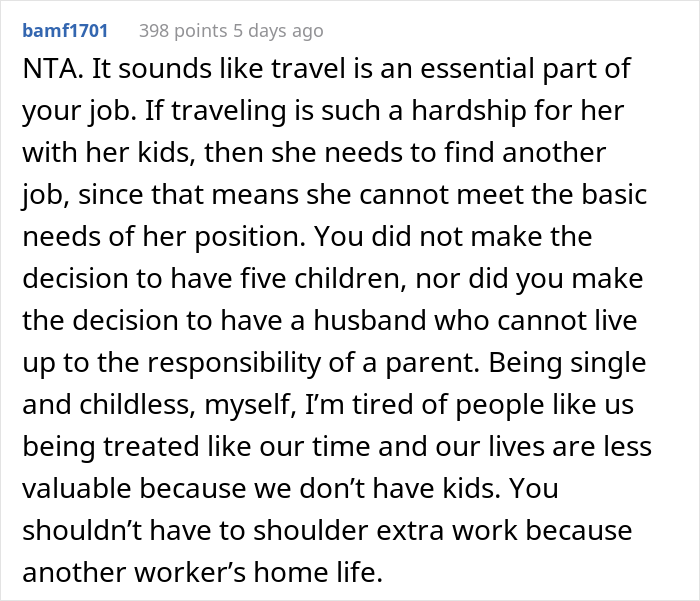 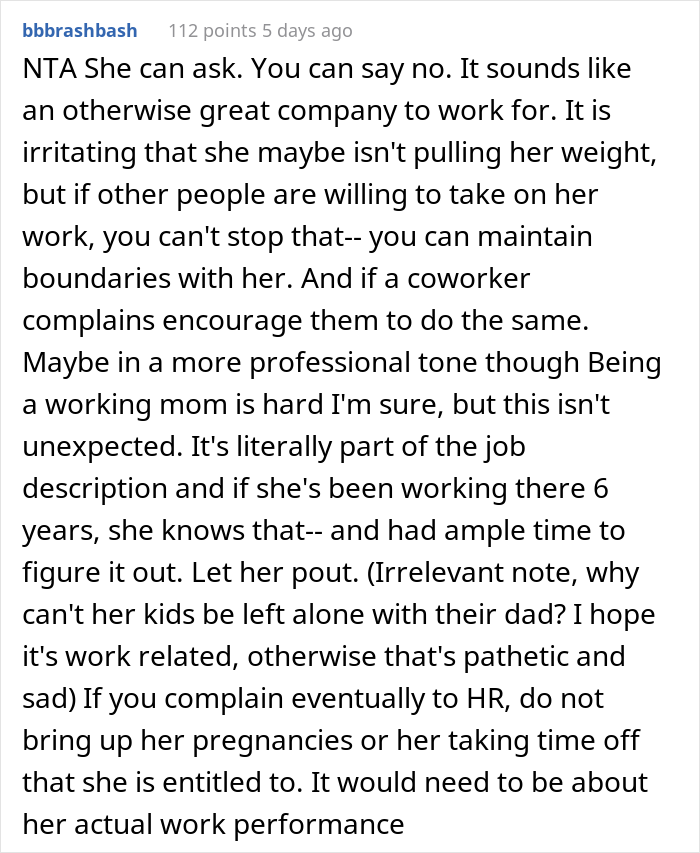 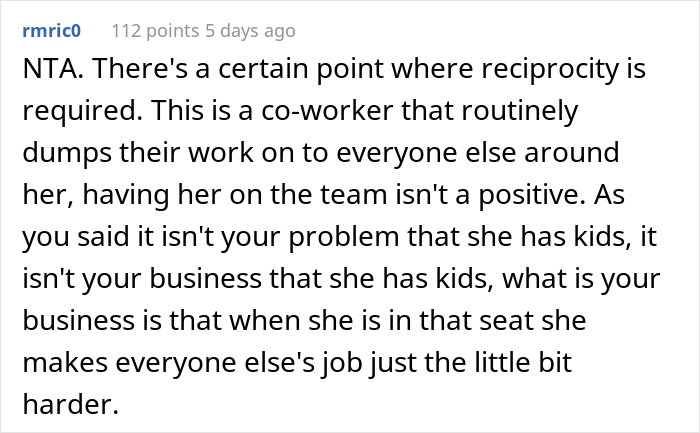 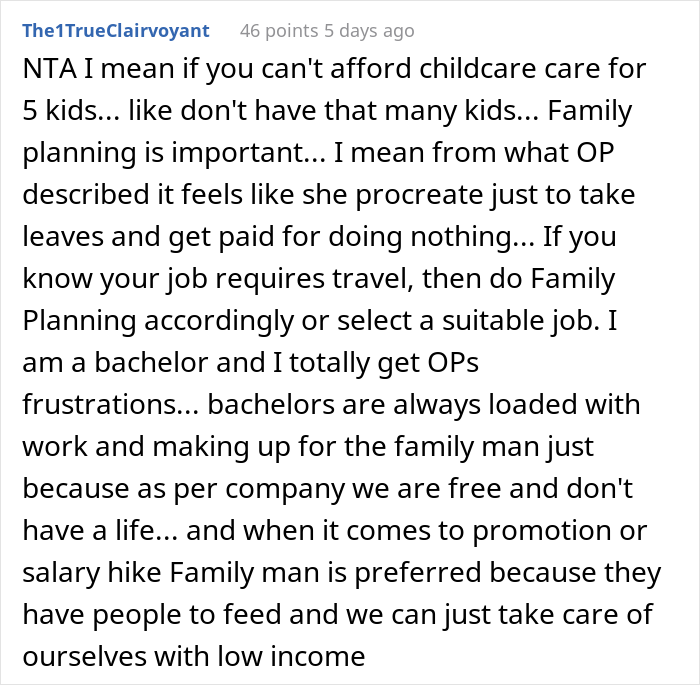 The post Childfree Woman Wonders If She’s A Jerk For Refusing To Help Out Coworker With 5 Kids first appeared on Bored Panda.