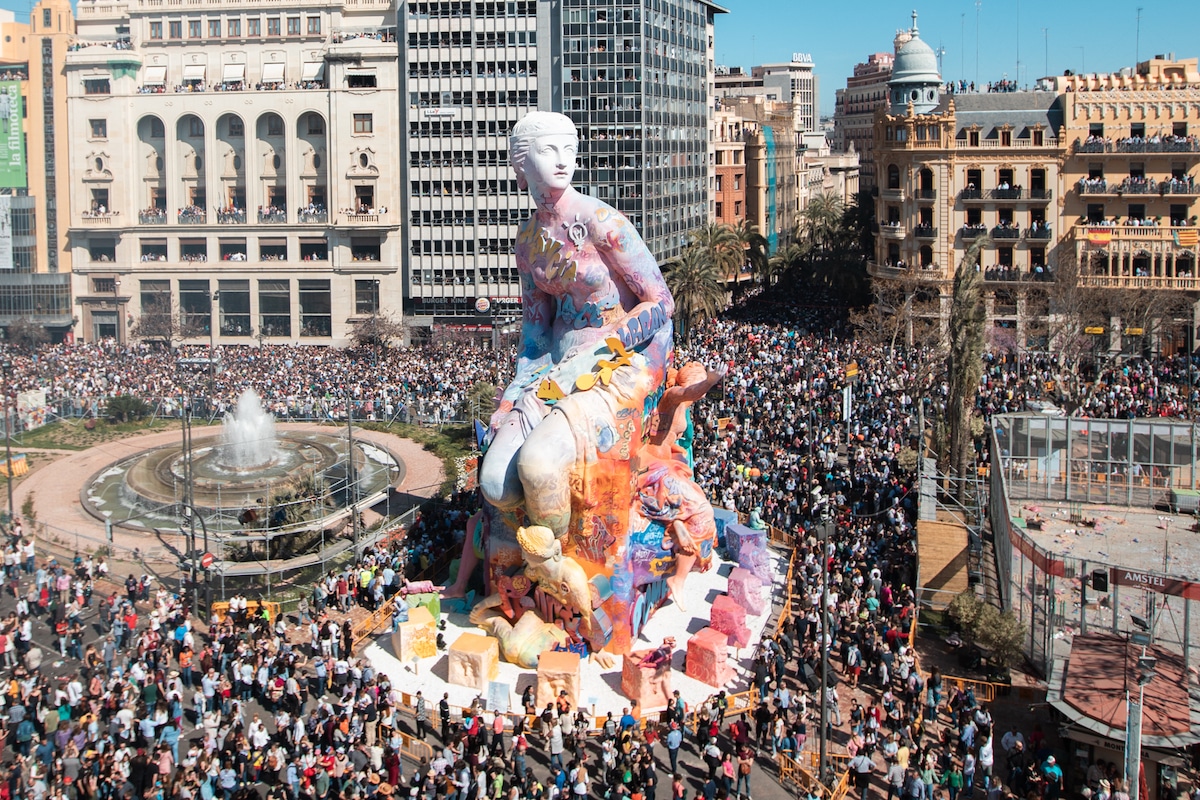 Street art duo PichiAvo, who have worked together since 2007, took their mix of classic and contemporary art to new heights by creating an 85-foot (26-meter) painted sculpture for Valencia’s Fallas Festival. This traditional festival culminates on March 19, when the puppets (or fallas) are set aflame in honor of the feast of St. Joseph. PichiAvo, who are from Valencia, follow in the footsteps of fellow Spanish street artist Okuda, who had the honor of creating the central falla last year.

PichiAvo are known for their pictorial work, which combines painted classical sculpture with graffiti motifs. Internationally successful, this was an opportunity for them to bring their artistic style back home and to blend it with this deeply rooted tradition. “For us, it was like discovering the historical Fallas Festival from inside, from its core,” the artists tell My Modern Met. “It was a moment of pride and satisfaction for both of us, especially when we finally saw our monumental scale sculpture set up in the main City Hall Square of Valencia.”

It took an entire year to create the falla, which was titled Procés Creatiu (Creative Process). Each section of the mammoth sculpture had to be painted by PichiAvo over the course of several months, when it was laid out like a puzzle. Working with a team of fabricators, a lightweight wood shell was created and then covered, leaving a blank canvas for the duo to paint their colorful tags. 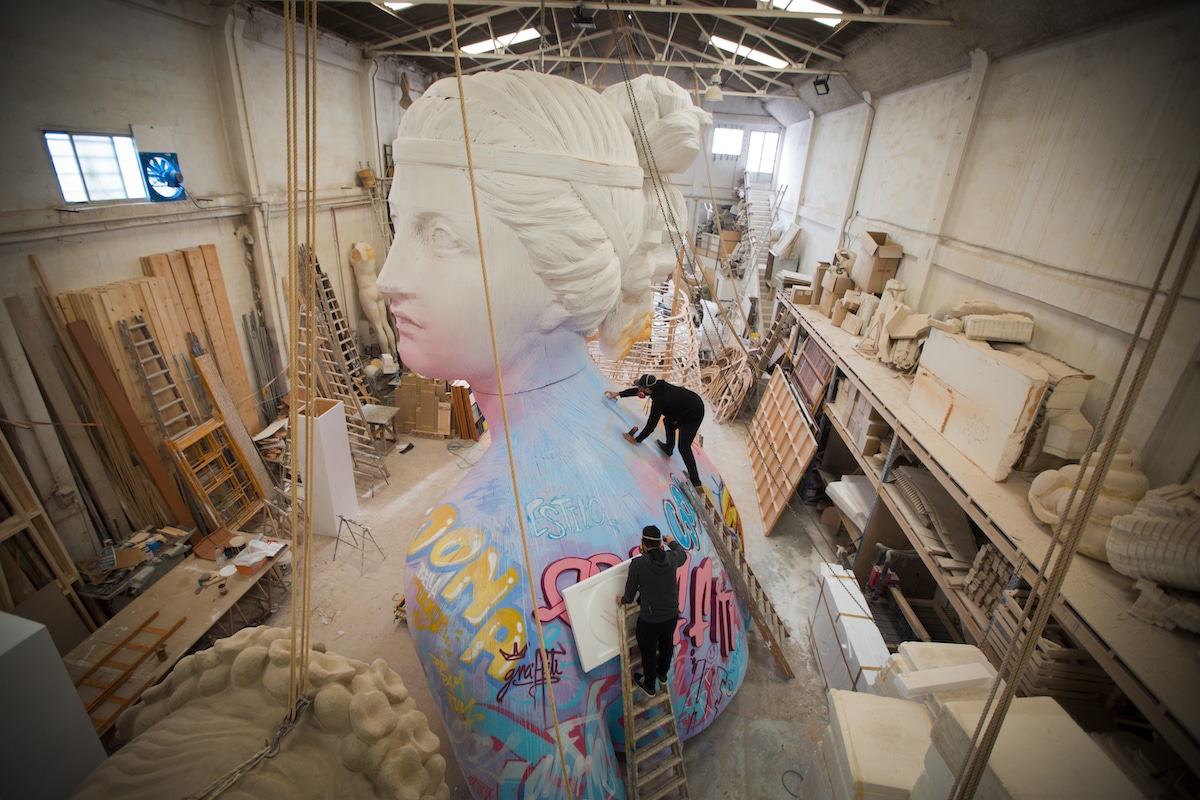 A giant Greek sculpture come to life, with this work PichiAvo take the painted sculptures they normally place on a wall and bring them back into three-dimensions. Instead of the graffiti work going side by side with the painted sculptures, in this case, they are meshed into one being, giving people a chance to see a new side of PichiAvo’s sculptural work.

The final product is all the more impressive when one considers that they also remained busy throughout the year working on other projects. This includes a major exhibition of their studio work at the Centro del Carmen cultural center in Valencia. Evreka, which runs until May 5, 2019, is an opportunity for the public to see the full range of their creative output.

“The biggest challenge was giving our best during a very busy period, working on our Evreka exhibition and on our falla monument—giving the chance to our public to discover both universes: our studio work and the street urban artwork,” they confess. “These both work environments wouldn’t ever exist without each other.”

While it’s still possible to view Evreka, Procés Creatiu lives on only as a memory after the end of the Fallas Festival. The ephemeral monument was torched, per tradition, after four days of parties that brought the streets of Valencia to life. Intended to symbolize the birth of spring, Procés Creatiu is also a message of peace and hope for the coming seasons. And though some may see the disappearance of their artwork as painful, PichiAvo take a more philosophical view by quoting Greek philosopher Heraclitus, “Everything flows, nothing stays still.” 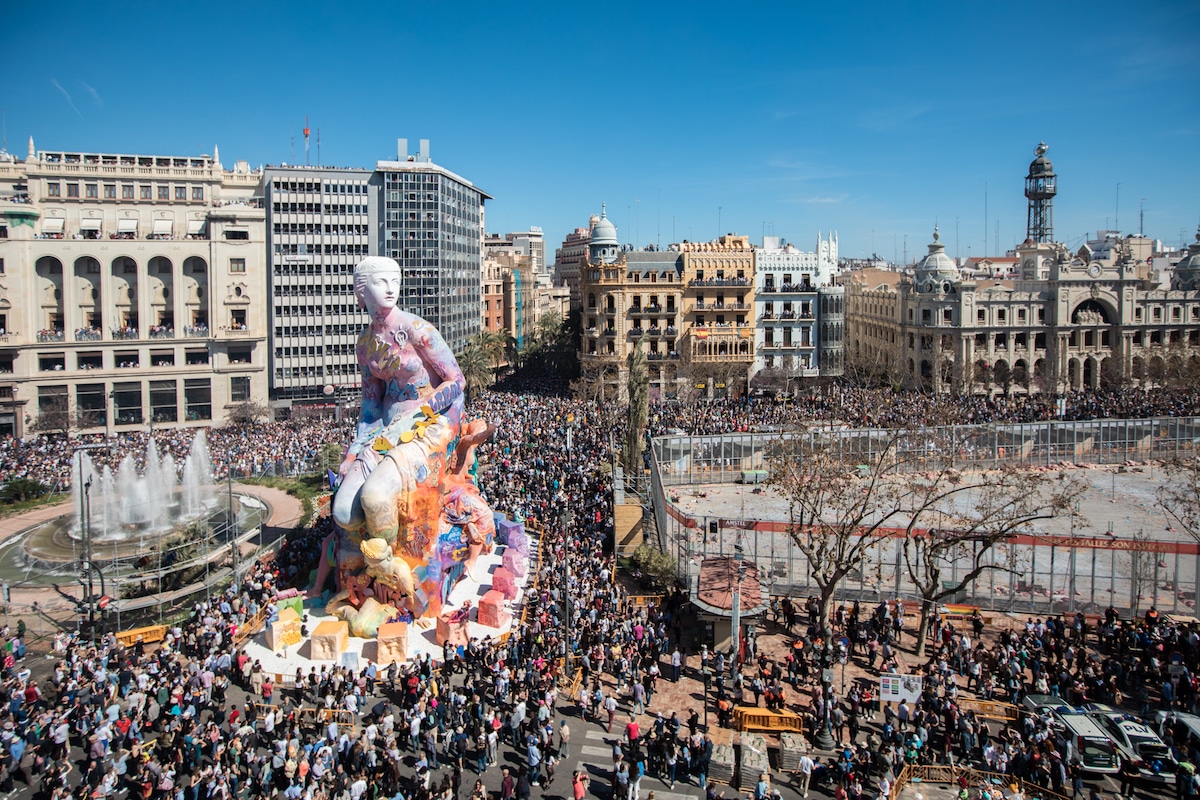 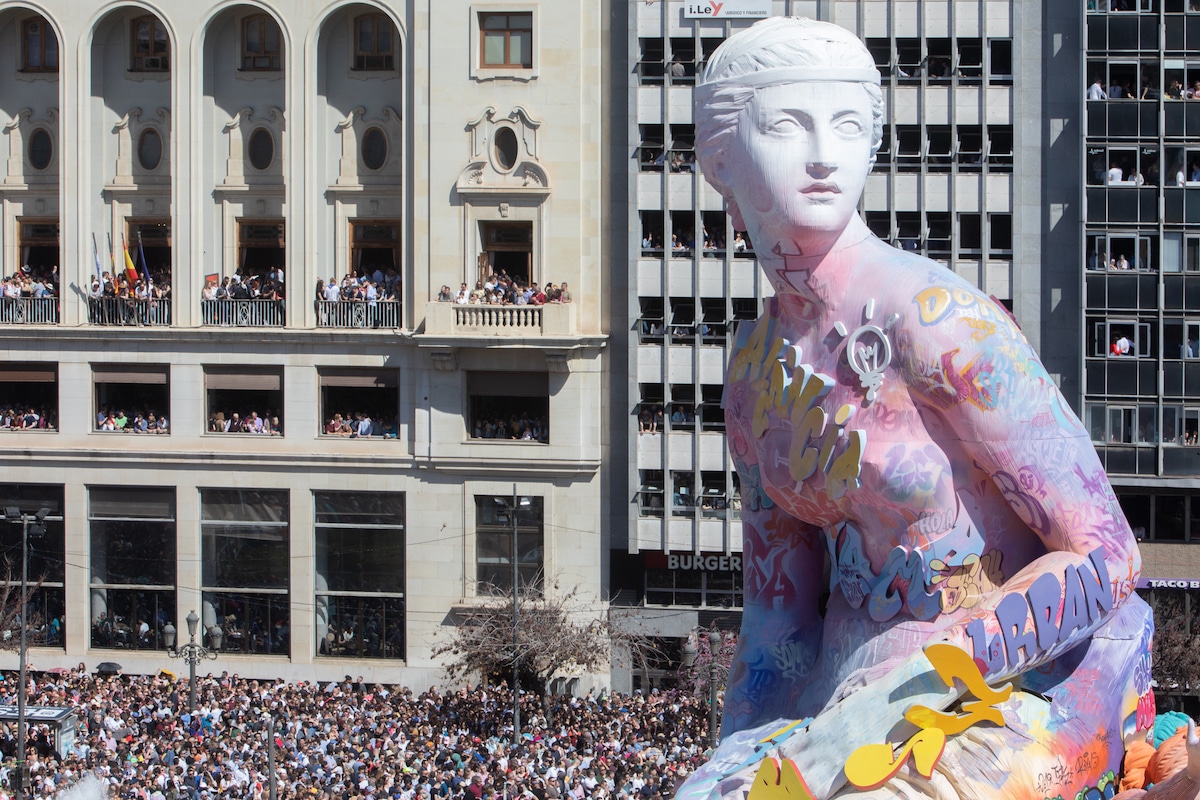 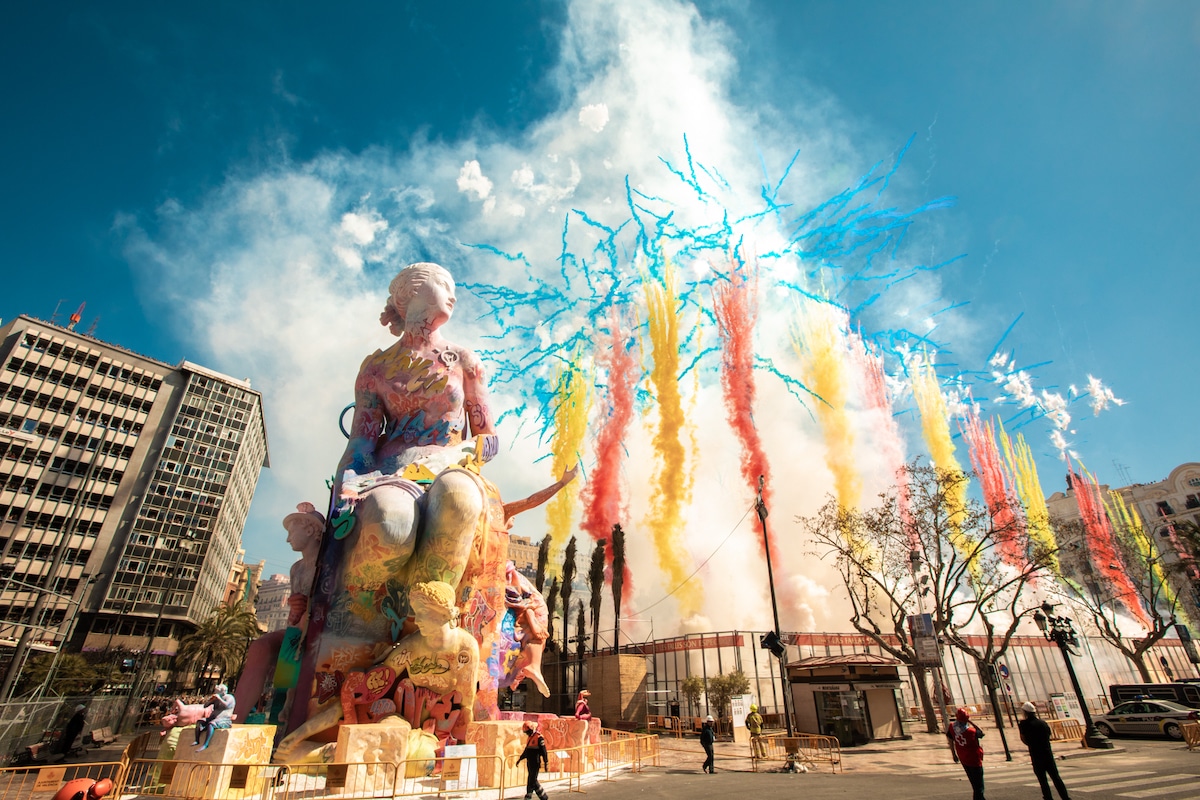 It took them an entire year to complete Procés Creatiu, which was painted in sections and later assembled in Valencia’s main square. 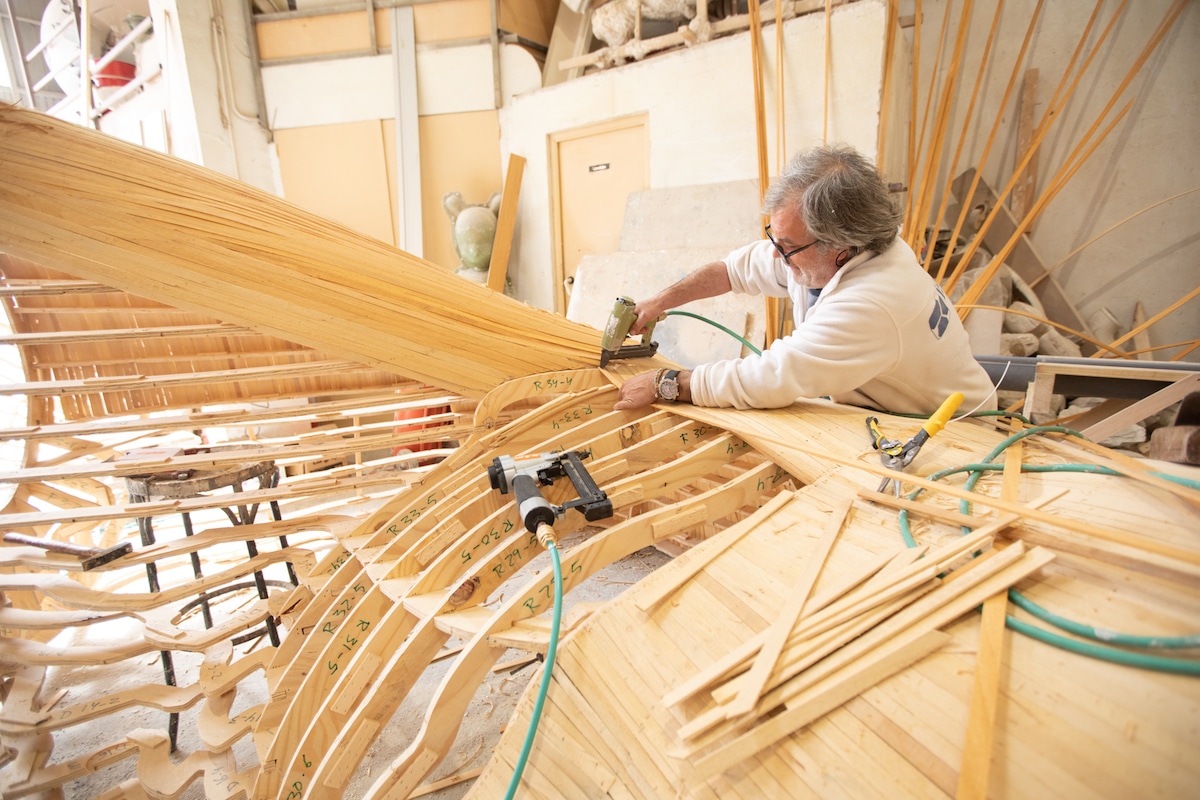 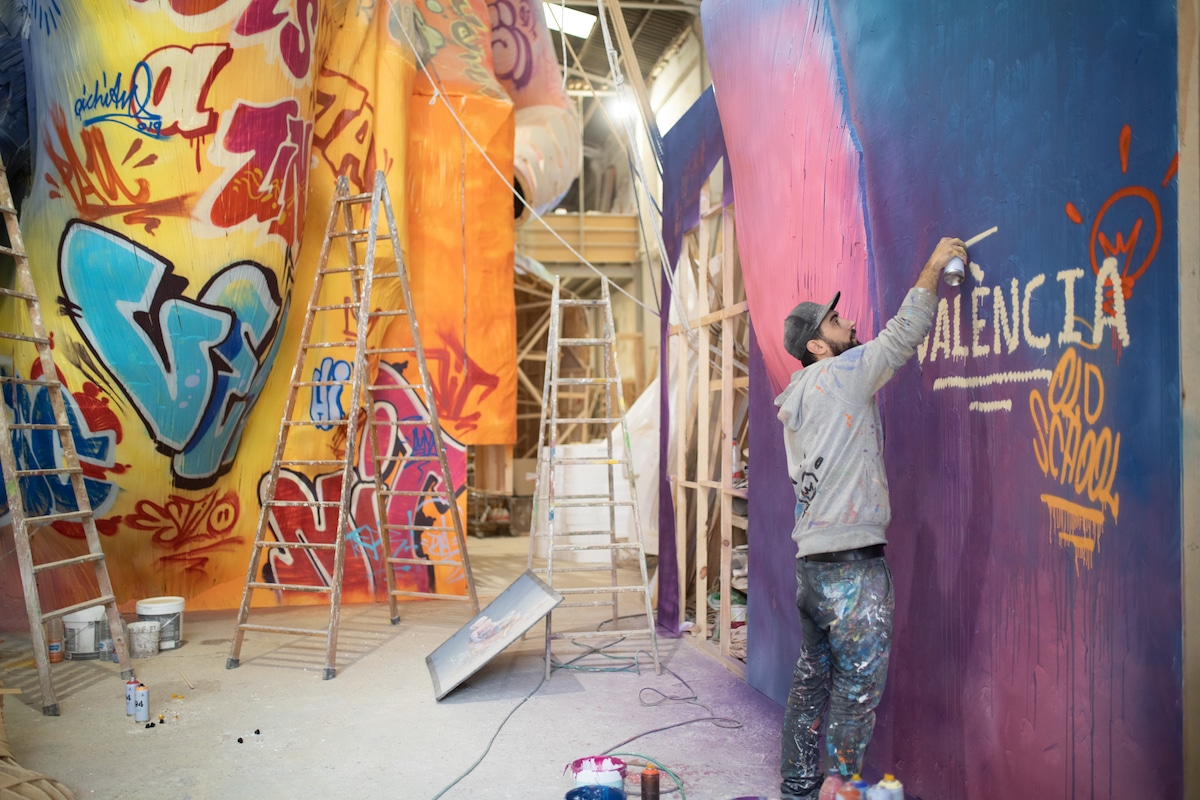 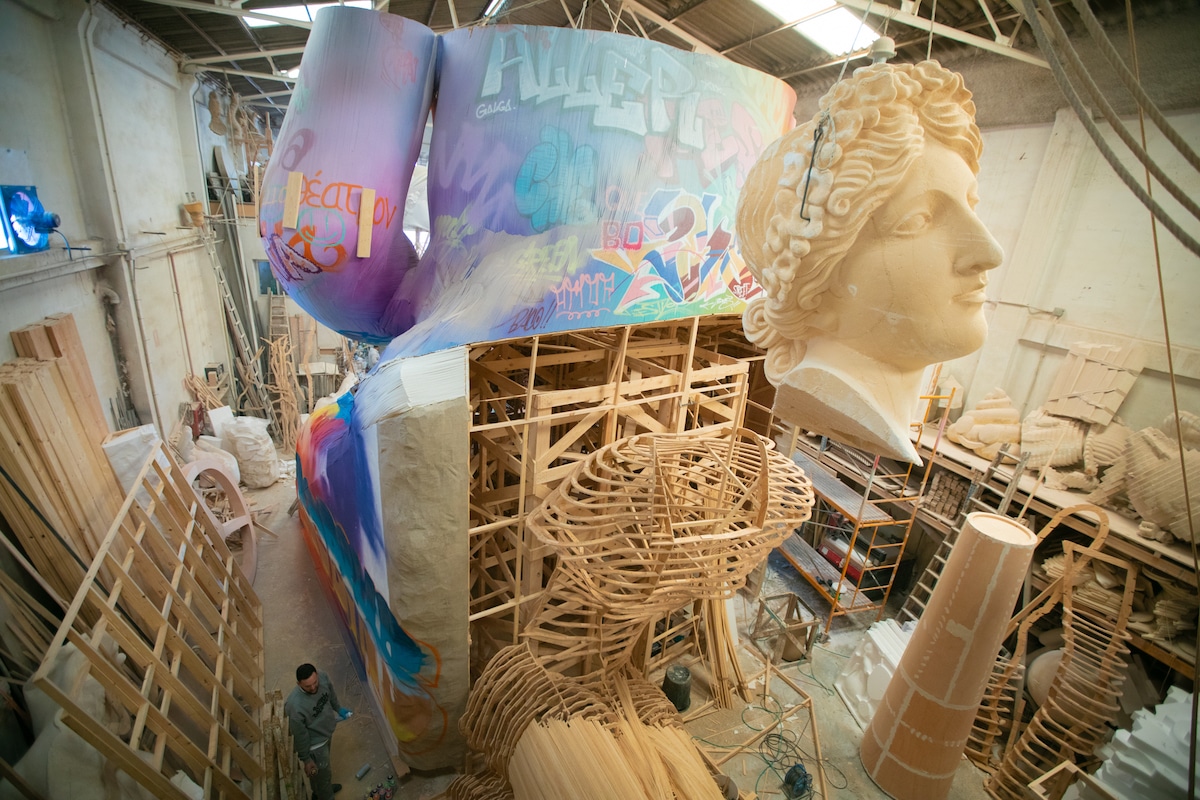 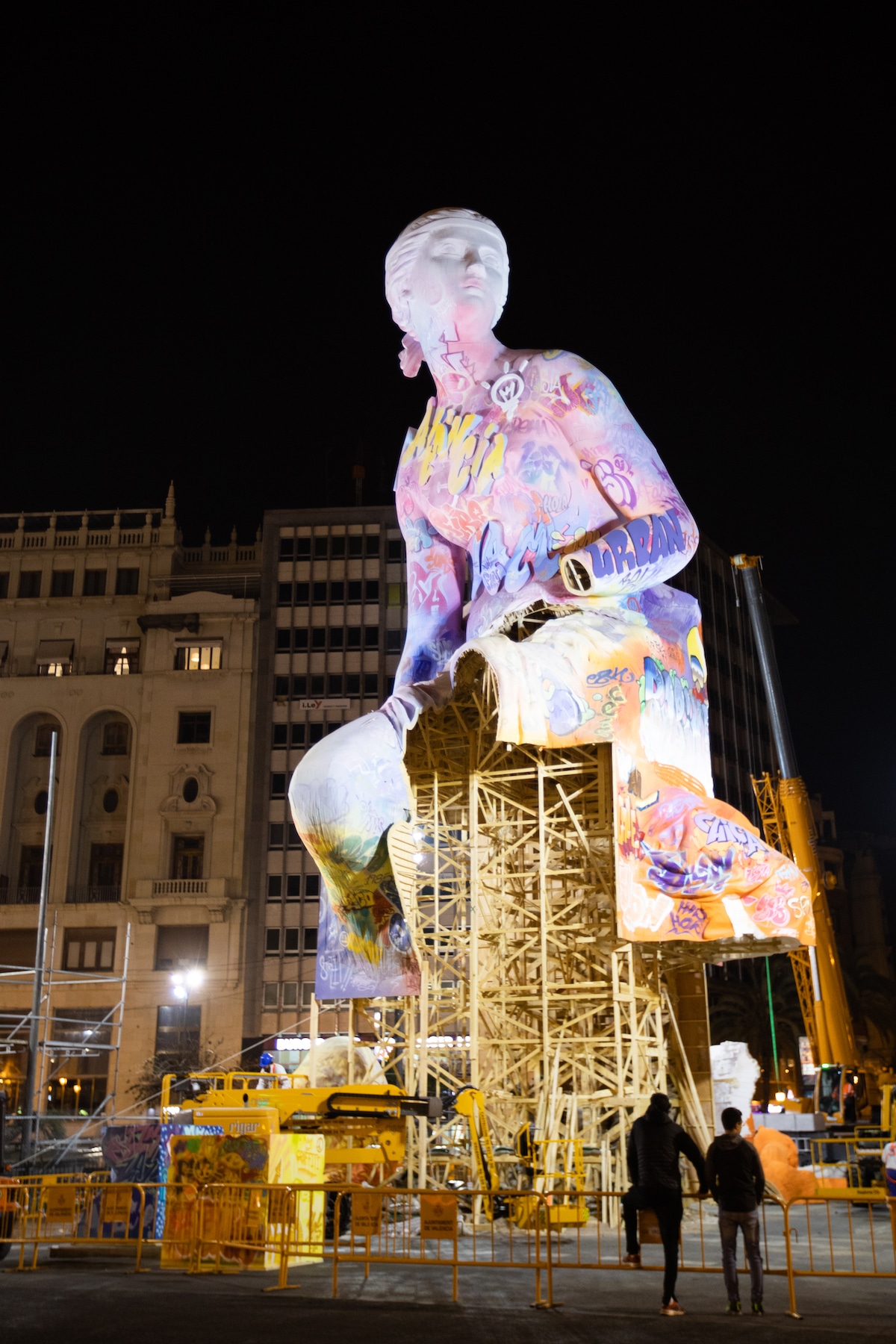 After four days of festivities and fireworks, the falla was set on fire as part of a ritual burning known as La Cremà. 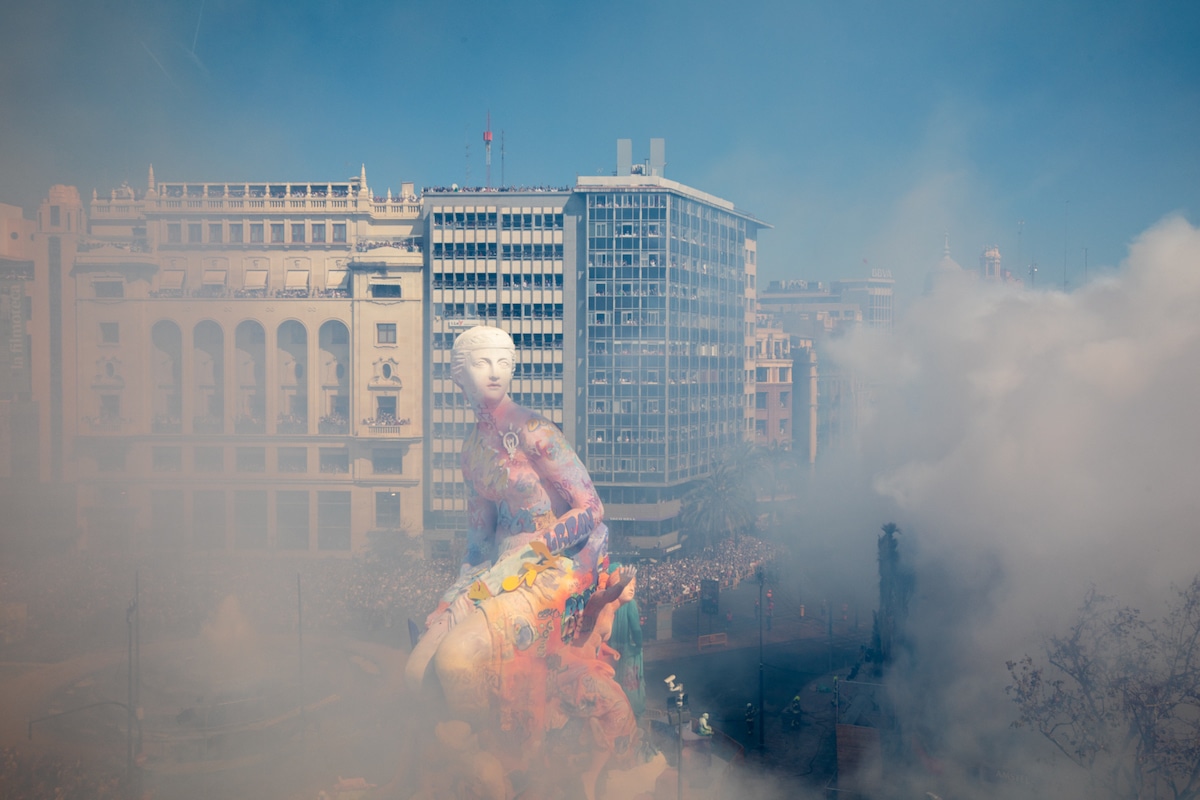 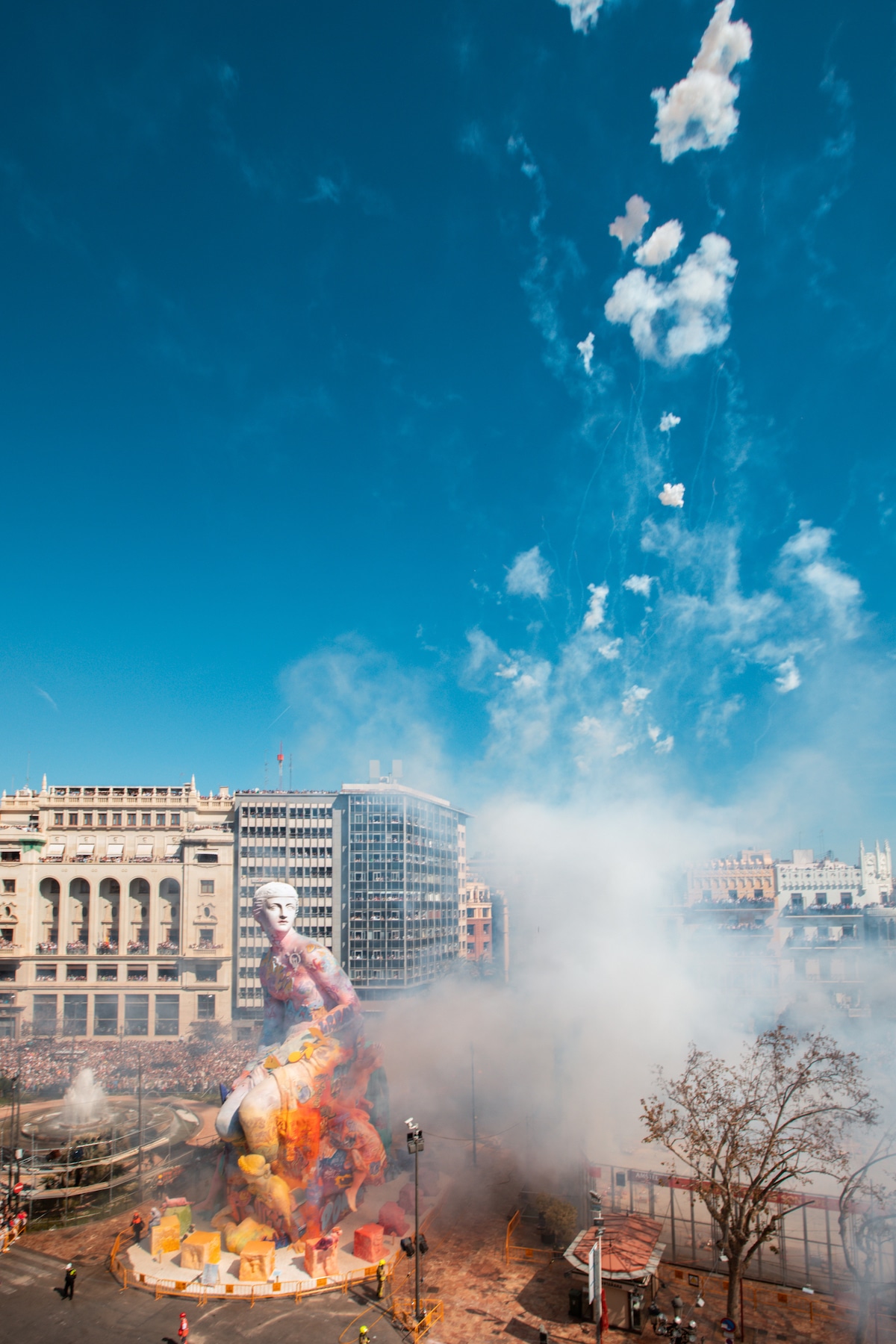 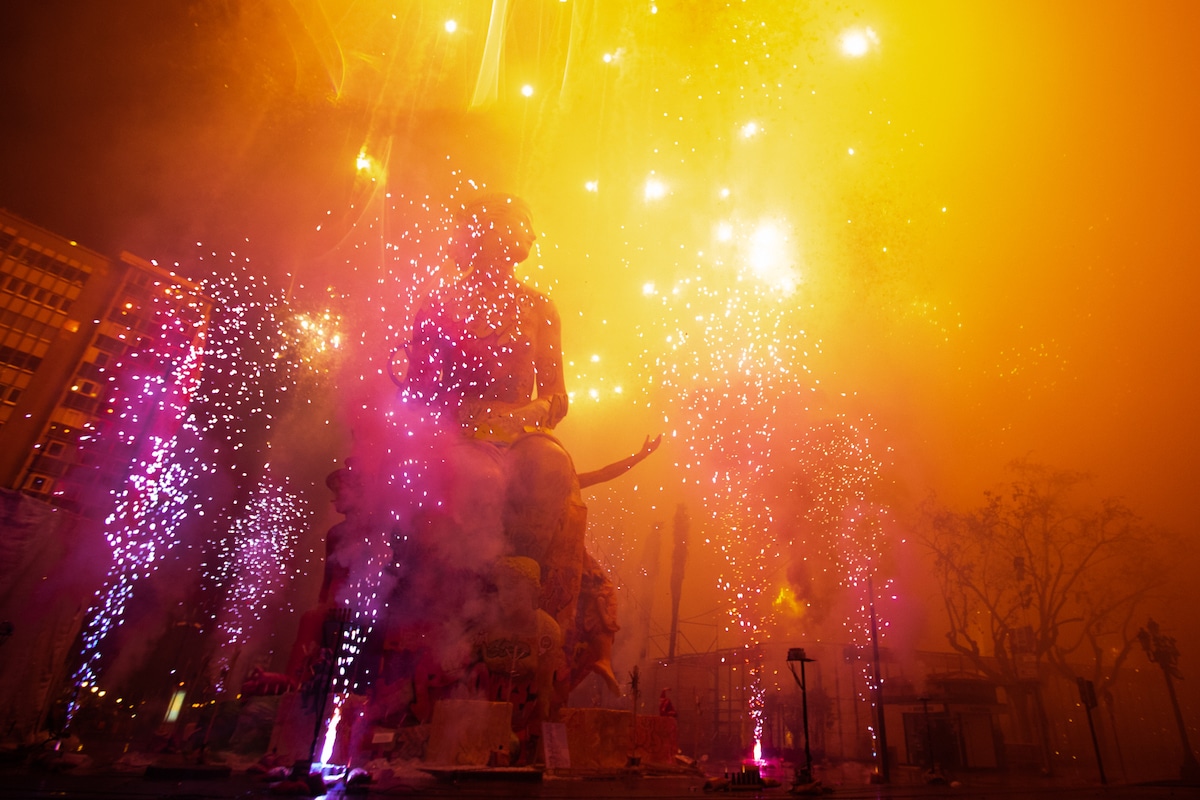 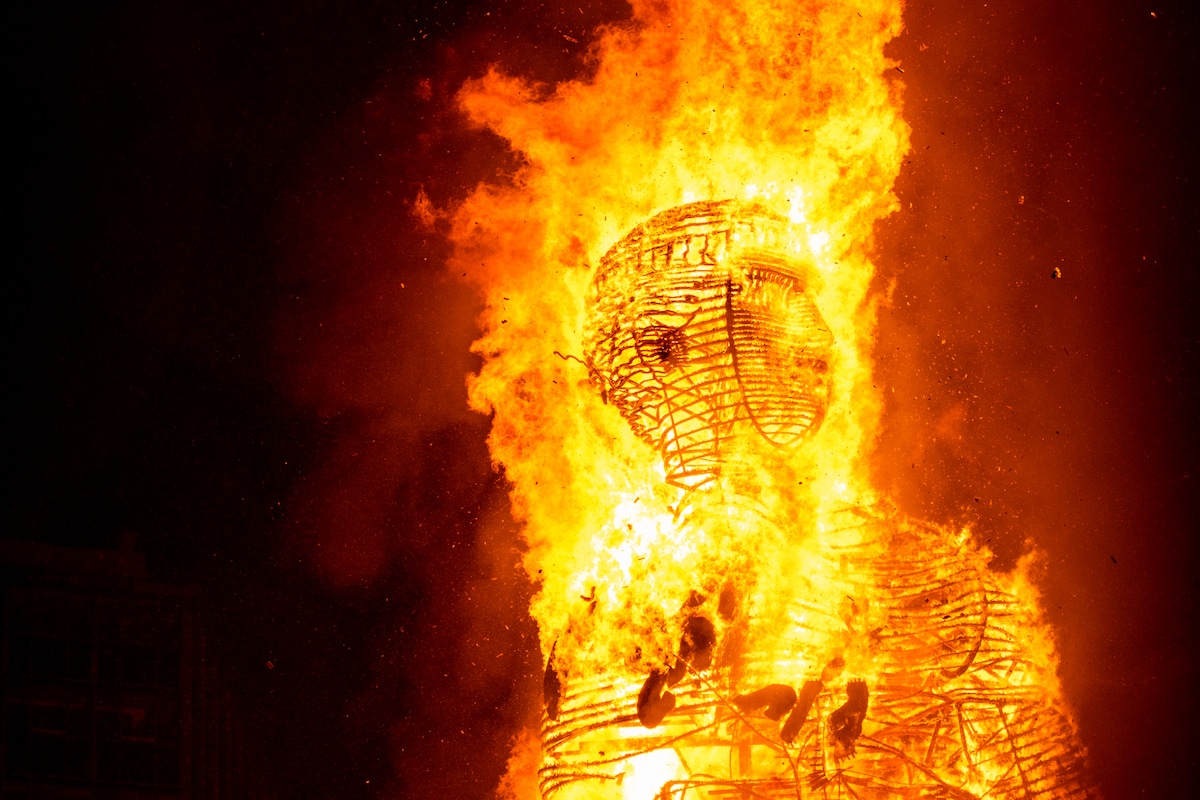 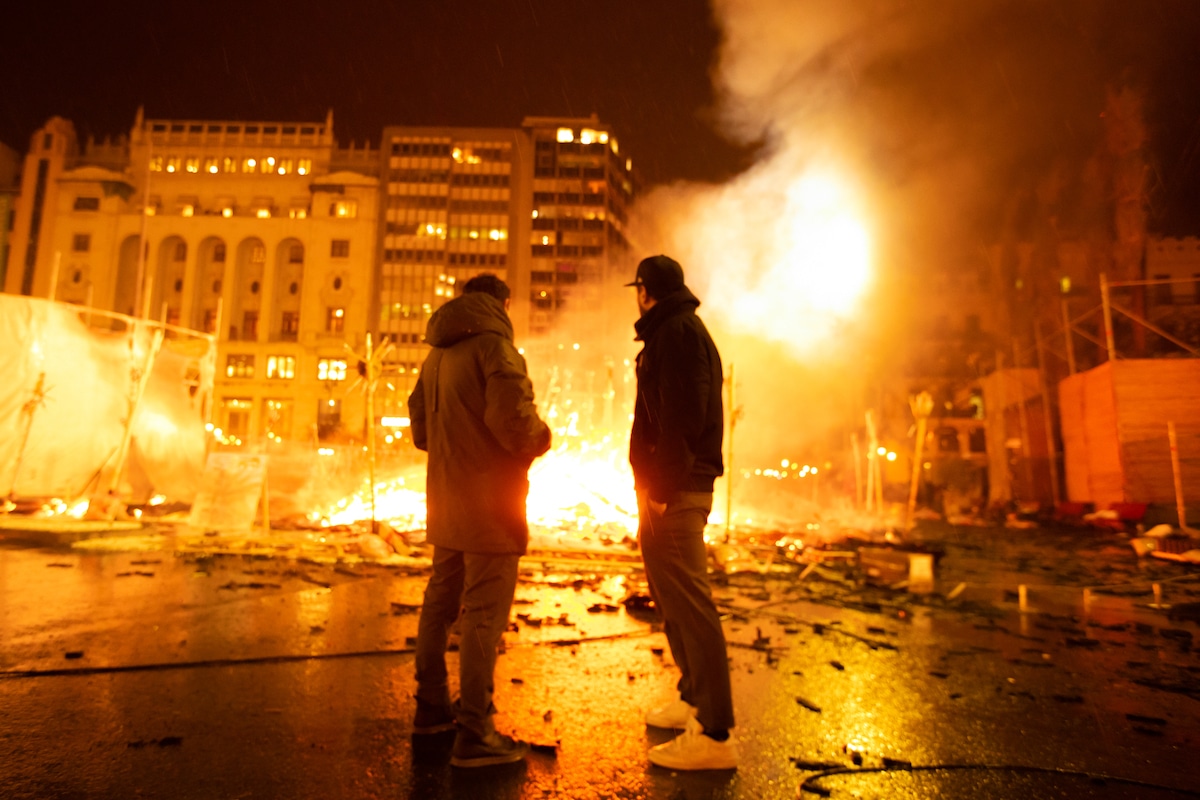 Watch these videos to get an idea of how Valencia lights up during the Fallas Festival.

All images via Estrella Jover. My Modern Met granted permission to use photos by PichiAvo.

Geometric Sculptures Give the Boston Seaport a Colorful Makeover

The post Classical Art and Graffiti Come Together in 85-Foot-Tall Sculpture Created for Valencia’s Fallas Festival appeared first on My Modern Met.