Working on a trial basis. Working as an unpaid intern. Working for exposure. All of these things are bound to get your inner alarm bells ringing, especially if the company or client you’re talking to doesn’t have a well-established, trustworthy reputation. In short, some companies use flowery language and promises of full-time contracts to hide the fact that you’d be working for them for free… for a very long time or until they don’t have any more use for you.

Redditor Nitiddesigns, aka social media strategy freelancer Luke, shared an email thread between him and a company that was considering hiring him. However, the work offer was incredibly shady and Luke felt like they were trying to get him to work for free. He didn’t waste much time and called them out on it. Well, things soon took a turn for the dramatic! Check out the full story below, dear Pandas!

Meanwhile, Bored Panda reached out to the Freelancer Club, which fights against unpaid work and supports freelancers, and had a chat with them about how to react when asked to work for free. Read on for our interview with the founder of the project, Matt Dowling. 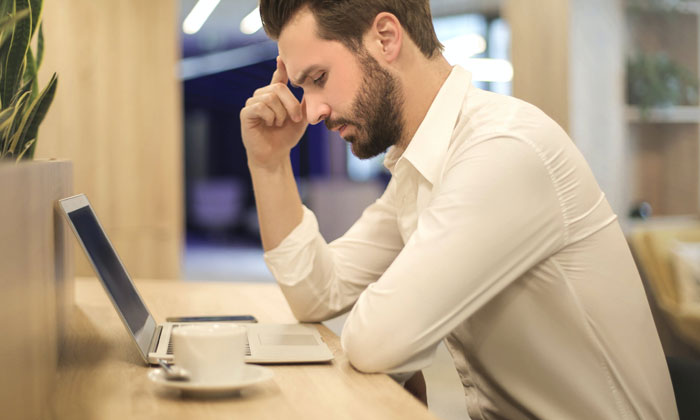 Though the job offer seemed more or less fine at the very beginning, it soon took a shady turn 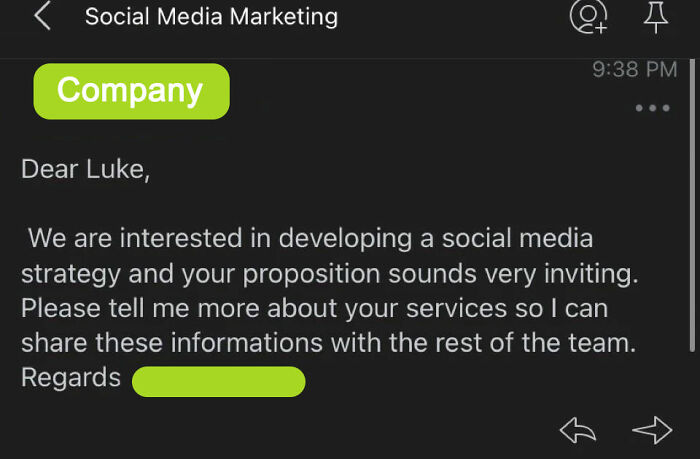 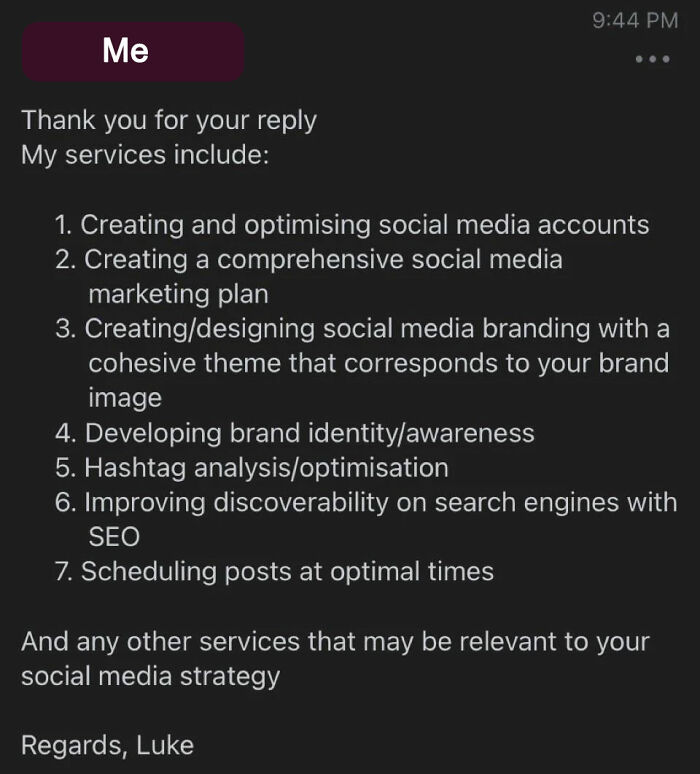 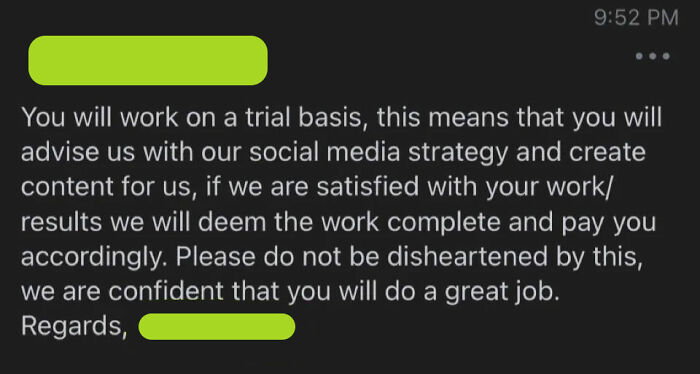 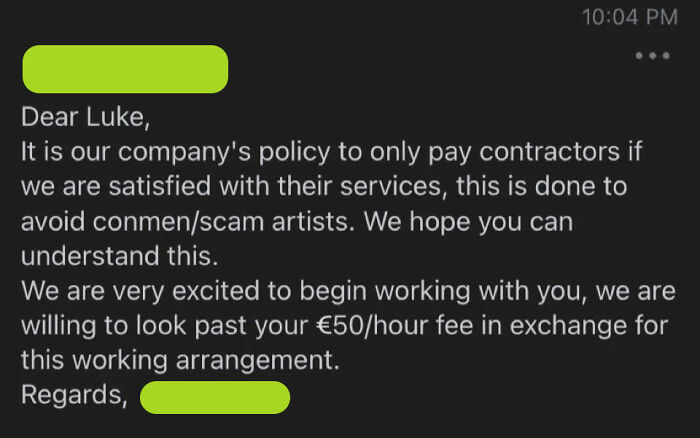 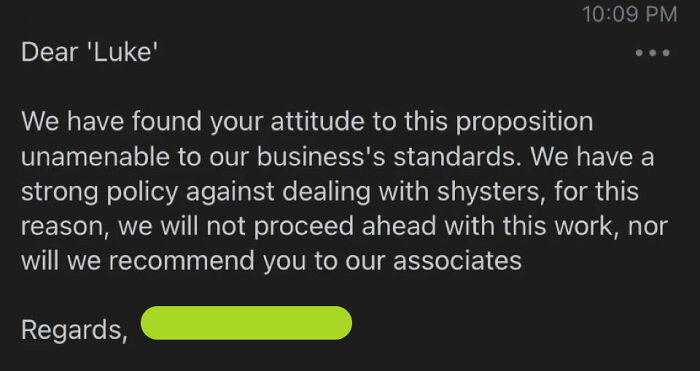 The company ignored Luke’s 50 euro per hour fee and instead offered to make him work on a trial basis. According to them, if they’re satisfied with the end results, they’d pay the freelancer. Essentially, they asked him to work for free with no guarantees of being paid. Ever.

When Luke pointed out that he’d like a written guarantee that he’d get paid for the work he’s done (instead of just relying on a promise that it might happen), the company representative quickly turned sour. They called him a ‘shyster’ (I believe everyone sees the irony here, no?) and even put his name in quotation marks, mocking him.

Matt, the founder of the Freelancer Club and the #nofreework campaign, said that everyone at the project is “all too familiar with” the scenario where a freelancer is asked to work for free.

“When we launched Freelancer Club, we vowed not to post unpaid work, and yet we receive requests for free work on a daily basis,” Matt told Bored Panda.

He noted that far from every request to work for free is malicious or comes “from a place of exploitation,” however. Some companies and clients are naive. Though that’s not true in every case, of course.

“We advise freelancers to gently educate the client by breaking down what is required for them to complete the project and highlight how this work will commercially benefit the client. It’s a difficult balance as you don’t want to embarrass the client or patronize them. Try to influence their outlook and explain why paying a fair rate for work will ultimately improve their bottom line,” Matt explained how freelancers can negotiate.

One of the core missions at the Freelancer Club is to empower its freelance members. “We believe creativity has an enormous value, both economically and socially, and that we must change the toxic culture that undervalues artistic endeavors,” Matt explained.

“We frequently lecture at creative universities to let the next generation of freelancers know that what they do is highly valuable and that it pays in the long term to say no to unpaid work. A study we conducted in conjunction with our #NOFREEWORK campaign proved as much. 73% of all freelancers who had accepted unpaid work in the past said it had no benefit or a negative impact on their careers,” Matt pointed out that working for free isn’t in one’s best interest. The proof’s in the pudding!

And here’s how some Reddit users reacted to the story 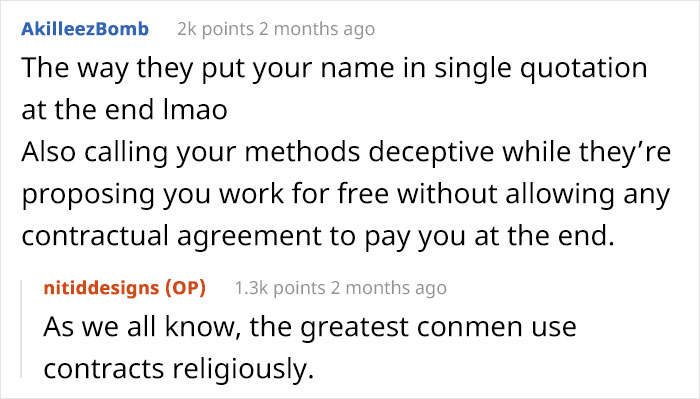 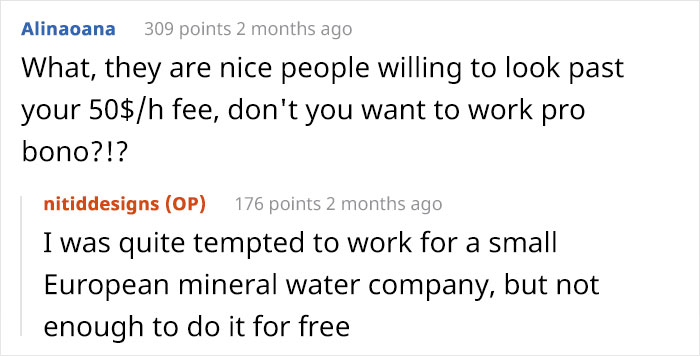 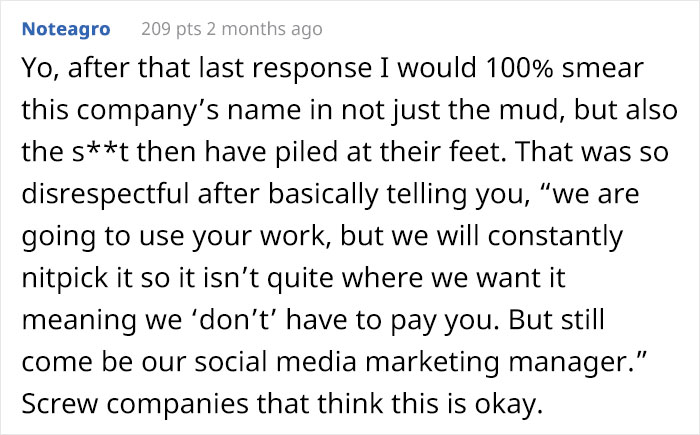 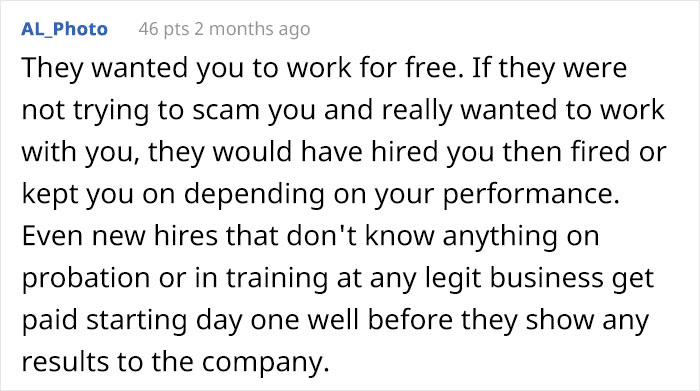 The post Company Wants This Guy Working Free Of Charge Until They Decide To Pay, Calls Him A ‘Shyster’ When He Refuses first appeared on Bored Panda.