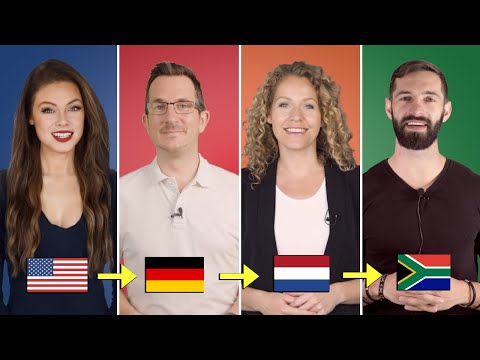 Four native speakers allow us to compare words in English, German, Dutch, and Afrikaans, all languages that descended from old German. Yes, Afrikaans is an offshoot of Dutch, but it’s still in the same family. The words are very similar, but that doesn’t mean that you’ll be able to follow a string of them in conversation outside of a language you know. It seems to me that English is the outlier in these words, but that may be because I am a native English speaker and do not know any of the other languages. Or it may be because English has incorporated so many words from other language families. As it is, the biggest complaint about this video is the use of an American flag for the English language. Do you think they should have used the Canadian flag or the New Zealand flag? The speaker is definitely American. -via reddit