To those living in 19th-century France, Gustave Courbet’s pioneering career could be divided into a series of scandals. “Since 1848 M. Courbet has been privileged to amaze the crowd,” the critic Champfleury wrote in 1855. “Every year we expect new surprises and, until now, the painter has answered the expectations of his friends as he has those of his enemies.” In other words, Courbet’s paintings made people angry, and the public seemed to delight in being enraged by his art.

Today, Courbet’s paintings are held in the greatest museums in the world, and they are now viewed as being key works associated with a style known as Realism, which aimed to showcase, with almost photographic detail, everyday life in France—a subject that, at the time, was unfashionable because it did not conform to the bourgeois expectations of Paris’s Salon exhibitions, which prized history paintings and mythological scenes above all else.

At the time, however, Courbet’s canvases were provocations. They drew on the artist’s fervor for socialist ideals, and they did not shy away from depicting poverty in contemporary society. In the process, they sought to find a merger between politics and art—though not without creating drama along the way. Below, a survey of Courbet’s most controversial works and the backstories behind them.

The year Courbet began work on this painting, his career was on the rise. He’d shown a work depicting a dinner scene at Ornans at the 1849 Salon and received a gold medal for it, and he was getting positive notices from critics. Then he showed this 22-foot-long painting in Paris, and critics lambasted him for it. “It was as if a tornado had rushed through the exhibition hall,” critic Jules-Antoine Castagnary wrote at the time. Another critic derisively wrote that the painting was an example of the “cult of the ugly.”

That had been Courbet’s aim, however—he wanted to paint something real and unvarnished, and so he came up with this scene, a history painting for modern times, which itself draws on earlier Dutch group paintings. In it, he offers a bleak vision of a funeral in a rural French town that is unglamorous, with a specific attention paid to lower-class individuals (attendees to the funeral served as models). The composition of the painting, with its open hole at the center, is intentionally off-kilter, and the representations of the people in it are not idealized in the way that characters in history paintings tend to be. The painting once disturbed its viewers, but now, it hangs at the Musée d’Orsay and is considered one of Courbet’s finest works. 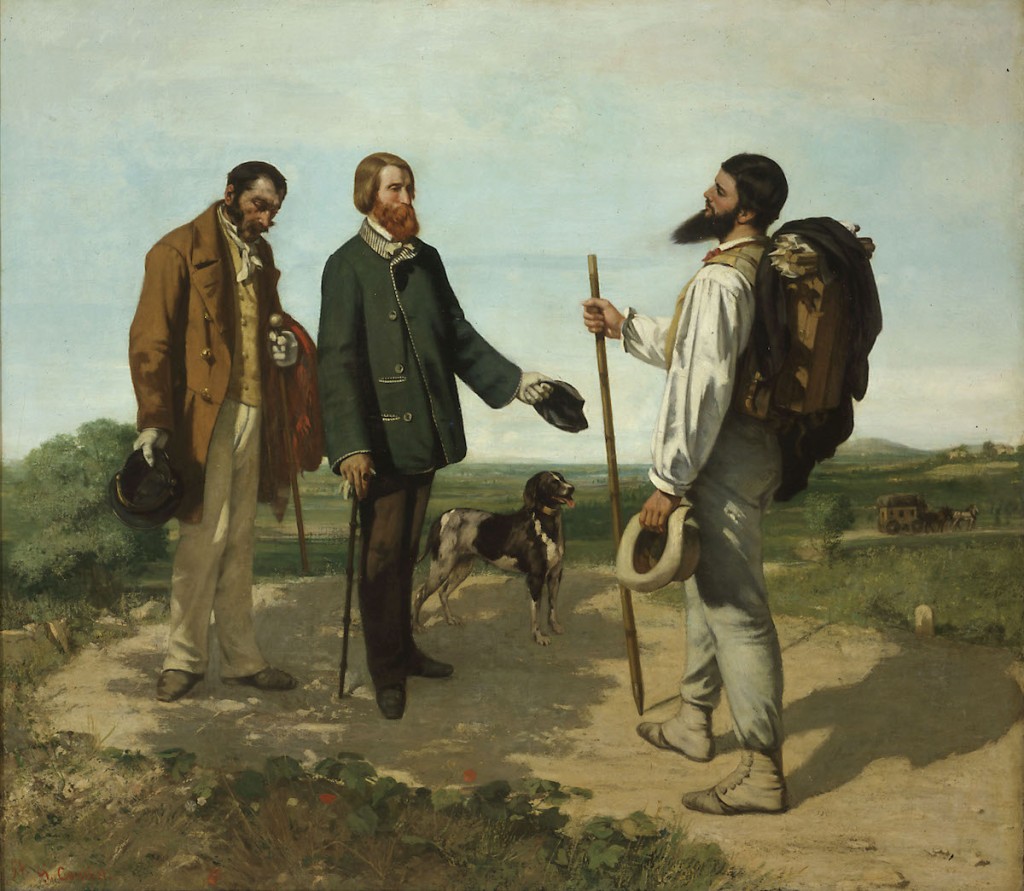 This painting, featuring Courbet meeting with a patron in the French countryside, seems simple at first glance—but it ended up ruining one of the closest friendships that the artist had at the time. The patron in question is Alfred Bruyas, who early became one of Courbet’s most important collectors. To memorialize their friendship, Courbet created this work, which features the artist at right, with Bruyas at center and his servant Calas at left. Courbet, in typical form, presented himself as a worker, with a backpack and a walking stick hinting at a long journey leading to this chance encounter. In fact, however, Courbet had taken a newly opened railway system to get there.

Critics had accused Courbet of narcissism in the past, and the artist having so prominently included his own likeness in the work did little to dissuade them of that. When it showed in Paris at the Exposition Universelle, which reportedly drew more than 5 million visitors, the painting was parodied as a “lesson in politeness given by M. Courbet to two bourgeois”; another writer called it the “Adoration of M. Courbet, realist imitation of the Adoration of the Magi.” Bruyas, feeling himself pilloried in the process, tried to respond with a statement of his own, and was mostly ignored. He didn’t publicly show the painting again until 1868, when he gave it the Musée Fabre in Montpellier, which currently owns the piece.

More recently, some artists have considered the fracas involving The Meeting a valuable example of Courbet’s anti-market sensibility. Marcel Duchamp, never one to satisfy collectors’ needs, once characterized Courbet’s attitude as such: “I paint a picture, Mr. Collector, you can take it or not take it, but I will not change it, it is for you to comply with my decisions.” 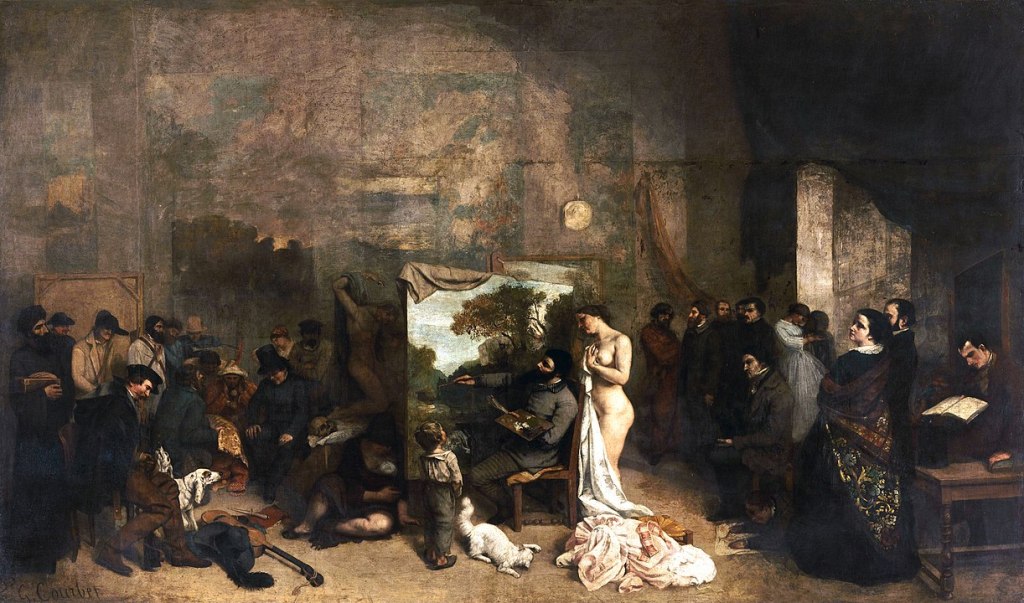 Gustave Courbet, The Painter’s Studio: A Real Allegory Summing Up a Seven-Year Phase of My Artistic Life, 1855.

The Painter’s Studio: A Real Allegory Summing Up a Seven-Year Phase of My Artistic Life (1855)

At a whopping 19.5 feet wide, Courbet’s most ambitious work was realized on the scale of a history painting, which means that he likely wanted the work to head to a museum or some other grand showcase. But this work, like many others by Courbet, was not well-received: it wasn’t displayed in any institution until the 1910s (it now resides at the Musée d’Orsay in Paris), and it wasn’t accepted to the Exposition Universelle. Instead, it was shown in the Pavillon du Réalisme, in a sort of anti–Exposition Universelle.

What, exactly, this painting means has left critics wondering. “It is fairly mysterious, it will [keep] people guessing,” Courbet wrote to a friend. The work can be loosely assumed to show Courbet’s studio, with the figures around him acting as stand-ins for larger ideas—Hélène Toussaint, Linda Nochlin, and other important art historians have spilled lots of ink trying to analyze and identify each one of them. But it is generally assumed to now be a statement about the merger between art and life—which took on a political dimension for Courbet, who put himself at the center of his composition and was called an egotist for it. 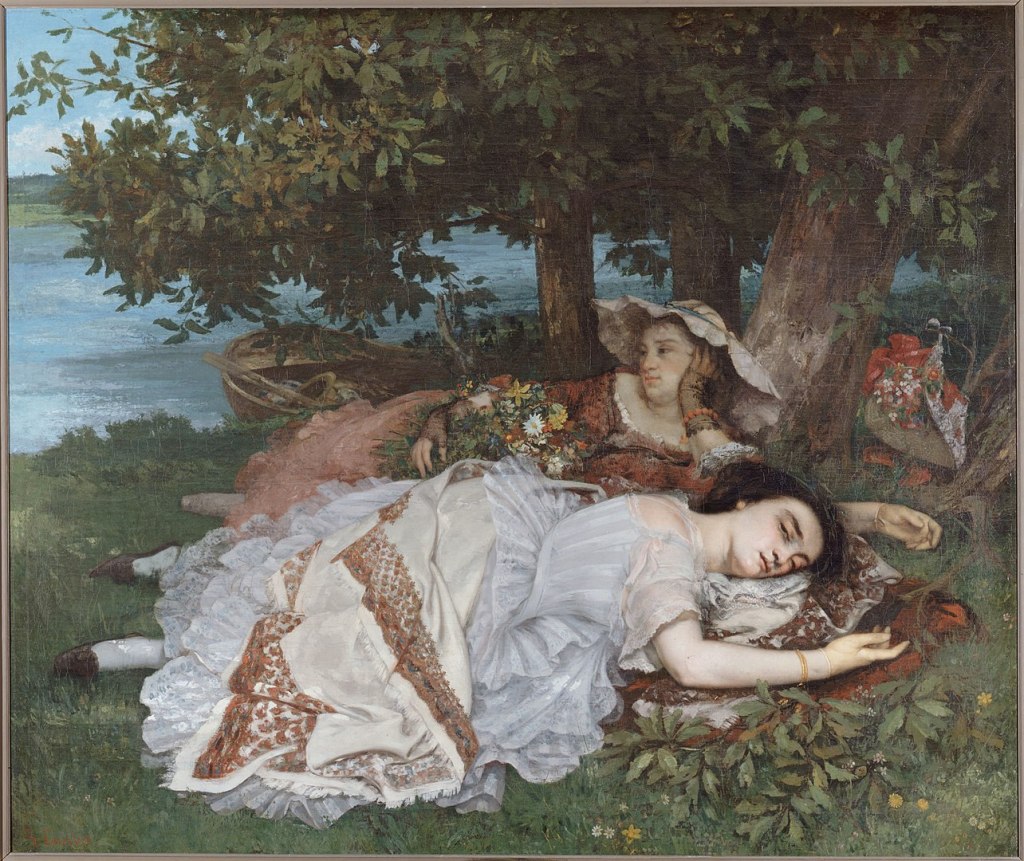 The most controversial aspect of this canvas, featuring two women sprawled out on the riverside of the Seine, hardly seems transgressive now: that it is clearly set in 1850s Paris. At the time, most artists created their work as though it existed in the past. But Courbet, true to his Realist goals, set the painting in what was then the current day, deliberately drawing attention to clothing styles that would have been seen as being of the moment. When it was shown at the Salon of 1857, even the critic Champfleury, one of Courbet’s longtime defenders, couldn’t help but say that the artist had gone “astray.” 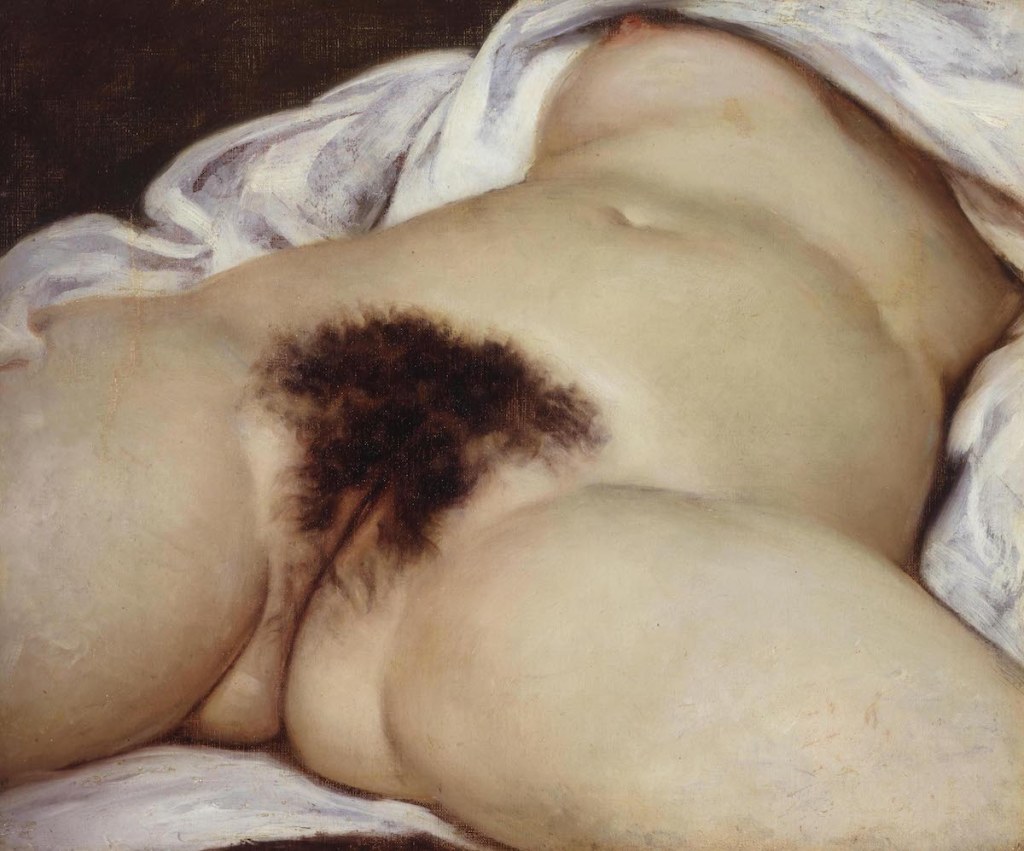 Gustave Courbet, The Origin of the World, 1866.

When The Origin of the World was painted, the work would not have been well-known. A close-up view of a woman’s pelvic region, it was first owned by a Turkish-Egyptian diplomat who invited close friends to see it, and it has passed through the hands of various owners over time, including the French psychoanalyst Jacques Lacan. (It is now owned by the Musée d’Orsay.) Part of the reason that the work didn’t generate much controversy when it was painted may be due to its exhibition history: it wasn’t seen publicly until 1988, when art historians Sarah Faunce and Linda Nochlin got New York’s Brooklyn Museum to show it. When the Brooklyn Museum exhibited the painting, New York Times critic John Russell wrote, “Even today, its precise and magisterial depiction of the female genitalia has retained its power to startle.”

Scholars have noted that the painting, in spite of its seemingly sexual nature, may not have been intended to be erotic. Nochlin called it “pornography,” but trumpeted its artistic value, noting that it acted as a proper distillation of Realism because of its chilled, unwavering gaze. Laurence des Cars, the director of the Musée d’Orsay, has written, “The carnally obvious is counterbalanced by the metaphor which this simple fragment—and leaving its title aside—can only render compelling.” Feminist artists, meanwhile, have viewed the painting as an example of objectifying women through the white male gaze, and in 2014, Deborah de Robertis got naked from the waist down and splayed her legs in front of the work as an act of reclamation.