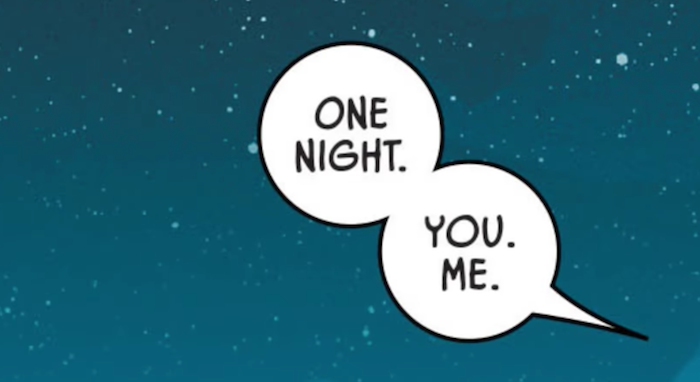 Panel selection from Batman #14 by Tom King and Mitch Gerard. Screencap via

Dialogue can be one of the trickiest aspects to master in comic creation. Those little floating word bubbles have to do so many things at once. They have to give information, represent intonation, timing, pace, inflection. Dalogue’s job within in a comic can seem never-ending, and crafting natural, interesting words for your spandex-clad heroes to exclaim and blurt out can seem overwhelming.

In this week’s Strip Panel Naked, the YouTube mini-comics master class hosted by Hass Otsmane-Elhaou, close attention is paid to the dialogue in the recent comic “Batman #14,” by Tom King and Mitch Gerard. “Batman issue 14 tells the story of Batman and Catwoman’s probable final night together,” explains Otsmane-Elhaou. “Before Catwoman goes to prison. As such, King elected to make this a personal story of two people connected taking place over this one night.”

The dialogue between Catwoman and Batman is fast and snappy, as they stare down the prospects of their last night with each other. “It’s not particularly realistic dialogue in a sense,” Otsmane-Elhaou adds as a disclaimer, “but then again this is a story about a man who dresses as a bat to chase down super villains.” A fair point.

Panel selection from Batman #14 by Tom King and Mitch Gerard

The video goes on to describe how the dialogue in this issue uses repetition to create a pinging, easy-to-read flow, and then breaks up the repetition to jolt the reader into attention. Even the man beind lettering of this issue, Clayton Cowles, helps the process by slightly overlapping the speech bubbles over top of one another, as seen above. This process of repeating truncated speech, though unrealistic, adds to the emotional impact of the story.

To see this use of dialogue in action, watch the full episode of Strip Panel Naked below:

To see more, visit the Strip Panel Naked YouTube page, and check out its Patreon page to support the series.

Is Collaboration the Most Important Key to Comics?