In March, as Covid-19 spread through her home city of Chicago, Stacy Patrice began livestreaming satsangs—traditional yogic gatherings for which people convene in the hope of seeking truths—to discuss concepts such as self-love and sanctuary. Her casual communions are offered by way of the Rebuild Foundation, the organization founded by artist Theaster Gates on Chicago’s South Side in 2009, and they have garnered a loyal following: Around 200 people tune in each week, through Rebuild’s Instagram Live—many more than Patrice’s typical in-person sessions can accommodate.

“The idea is to give nourishment and truth to others,” said Patrice, who has been an artist-in-residence at Rebuild since 2015. “It felt like a responsibility to meet and know what’s going on individually and as a community.”

Efforts to engage with different audiences are increasingly vital to many cultural institutions that have been wrestling with their roles. For many museums, remaining relevant during a global pandemic initially meant expanding digital content to bring art into homes. But in May, as Black Lives Matter protests prompted by the murder of George Floyd intensified across the United States, art organizations of all kinds found themselves in a wider social sphere, in which many institutions have been criticized for responses that have been dismissed as inadequate.

For Gates, who runs Rebuild as an extension of his practice as an artist, changing aims and expectations call for changes in executive and curatorial leadership. “It will be interesting to see which museums and museum directors will have the capacity to take this moment of extreme potency for transformation and do great things with it,” he said. “The solution cannot just be to hire Black curators so that they can organize Black shows. There has to be belief that artistic intelligence lives amongst all people, and a willingness to invest in those that seek out that artistic intelligence and amplify it on the walls of the museum.”

In recent months, Rebuild has stood out for its immediate, direct actions to care for Black and Brown people during the pandemic and ongoing protests. The foundation has been using its resources to help meet the needs of its communities in predominantly Black neighborhoods, which have been hit hardest not only by the health crisis but also by recent looting and vandalism. In addition to Patrice’s healing satsangs—which she said have been largely attended by Black women—DJ Duane Powell has been releasing mixtapes to uplift those sheltering in place while celebrating Chicago’s rich legacy of house music. It is not by accident that the foundation has been promoting outreach efforts over its own programming or its vast holdings of Black history and art. These include the archives of the Johnson Publishing Company (the publisher of Ebony and Jet magazines) and the vinyl collection of Chicago house legend Frankie Knuckles.

“We didn’t want to contribute noise and made a conscious decision from the beginning not to put things out that didn’t directly help our community,” said Julie Yost, Rebuild’s director of public programming. “It immediately became not about us, but more about the role our sites play in service of community. From the programming side, it became about rallying behind artists we work with who wanted to say something.” 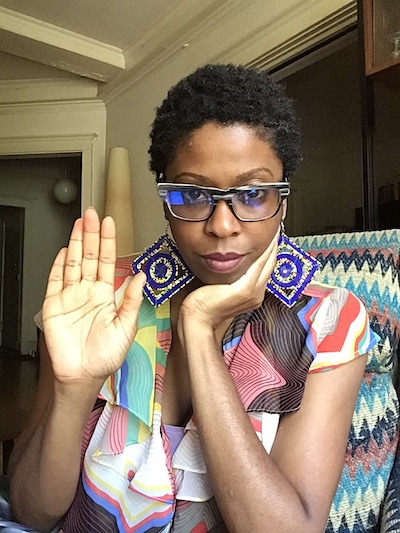 Stacy Patrice has worked with the Rebuild Foundation to host satsangs, or traditional yogic gatherings.

In early June, during protests calling for racial justice, looters devastated local businesses on the South Shore, including the area’s sole grocery store. Yost, wondering how Rebuild could be involved in recovery efforts, called Val Free, lead steward and CEO of the Neighborhood Network Alliance, a nonprofit that works to revitalize Chicago neighborhoods. The Neighborhood Network Alliance had been partnering with Rebuild for about a year on community outreach plans, so the organizations were able to swiftly devise a way to work together.

While NNA organized block cleanups, Rebuild used its reach to coordinate volunteers and raise donations for neighborhood relief. Stony Island Arts Bank, the foundation’s headquarters and gallery space, also opened up as a food repository, filling its hallways with supplies that volunteers packed up and distributed to neighbors. Over the month, they were able to deliver essential care packages to more than 840 neighbors. In recent weeks, Rebuild has also partnered with the artist-led nonprofit ALT space to install and regularly stock a pop-up market at a vacant storefront on the Arts Bank’s block.

These food safety efforts are stopgap measures, Yost said, adding that Rebuild is committed to developing future initiatives with NNA, especially as the economy sinks into recession. “As an arts organization, we recognize our entire mission is not going to focus on being a food repository, but we can still figure out tactical ways to support on the ground,” she said. “We are fortunate in that we can be nimble in ways larger institutions might have a harder time with.”

According to Free, the Arts Bank—though far from the only public institution on the South Shore—is the only one that has reached out to NNA to offer resources since Chicago was placed on lockdown. Cultural spaces can begin to be better neighbors, she said, by hiring someone who is familiar with nonprofits in the area and can build relationships with them.

“Local grassroots organizations are really the boots on the ground,” Free said. “They know the people who need the help, or can get help to people who need it. So how are you supporting these organizations before and after [crises], so when things happen, the partnerships are in place, and the level of trust is also in place?”

Arts organizations need to accept measures of accountability, Gates said, whether for their own mission statements, governing boards, or curatorial decisions. In regards to current crises, he added: “It is possible for institutions with cultural specificity to consider the times and respond in any myriad of ways to the possibility of a creative output.”

Recalling an essay by Chicago Architecture Biennial curator Yesomi Umolu that argues for the “fundamental rethinking of the role of museums,” Gates suggested some alternatives for museums in the city where he is based. The main hall of the Art Institute of Chicago, he suggested, could become a Covid-19 testing station, thereby making it “a place of refuge.” 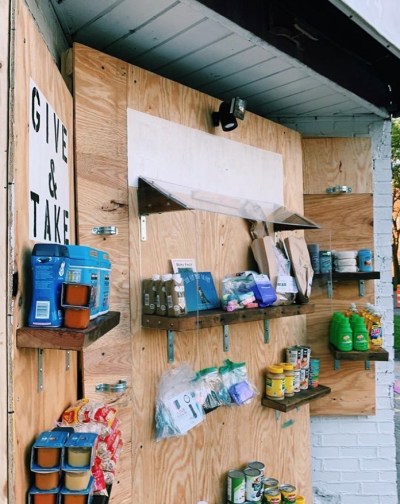 The nonprofit ALT space has worked with the Rebuild Foundation to create a pop-up market in a vacant storefront.

“This could be the most contemporary and conceptual of artistic practices, but this totally depends upon how the leadership of that institution translates into curatorial opportunity, programmatic intention, and racial solidarity,” Gates continued. “I’m convinced that most of our museums would rather remain shuttered than imagine that the crisis that exists in Black and Brown communities around the world could be future subjectivities for their curators.”

Rebuild itself is grappling with how its various sites, like the Arts Bank, can serve as physical places of refuge during an unprecedented global pandemic. As a gathering space for predominantly Black neighborhoods that have been disproportionately affected by Covid-19, reopening the Arts Bank, for instance, could endanger not only front-facing staff sites but also the surrounding communities, Yost said.

Yost also faces the impending challenge of implementing visitor restrictions when the Arts Bank does eventually open. “We really strive to not feel like a place where you are policed,” she said. “So the thought of reopening our space and having our staff watch people to make sure they are socially distancing—it almost goes against so much of our ethos.” For the rest of the summer, the director hopes to organize safe outdoor activities, from performances to film screenings.

The weekly satsangs, too, will continue streaming. Since the protests, Patrice has been increasingly compelled to use her gatherings to focus more deeply on soul loss, reclamation, and “imagination as a revolutionary tool.”

“We can really begin to heal by reimagining how we show up,” Patrice said. “Whether as creators, in our practice, or if you’re a place of the arts. This is a grand opportunity to do something in your own way that contributes to the lives of those who are most vulnerable right now.”

This story was produced in partnership with the Pulitzer Center. For more stories about the effect of Covid-19 on museums, please visit the Prairie State Museums Project at PrairieStateMuseumsProject.org.