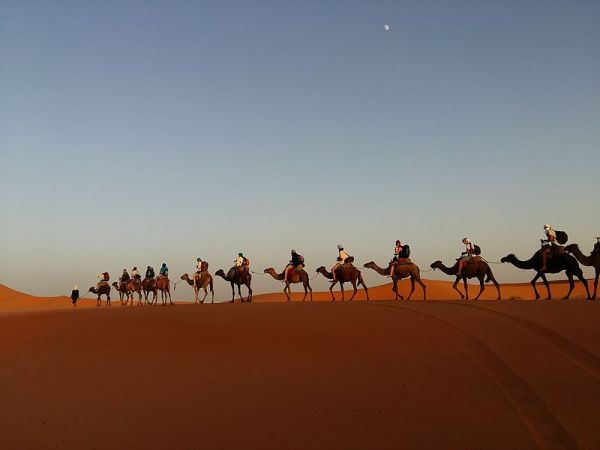 The most popular method of crossing a desert in the 21st century is to fly over it. You can also take a bus or a car, aided by maps, GPS, paved roads, cell phones, and coolers full of ice and water. It was not always so. To get from here to there across the Sahara Desert before modern conveyances involved two months of riding a camel. More importantly, one had to trust locals who knew what they were doing -and one had to pay them well.

Between mid-February and mid-April 1352, Ibn Battuta, the Moroccan traveler who delighted in exploring the whole of the Islamic world, crossed the Sahara. The Masufa, a tribe of the Sanhaja confederation, controlled the caravan. Let’s be clear: the leader of the caravan, the scouts, the camel drivers, the guards were all from this tribe. It was better to put one’s fate into their hands than to fall into their hands. Anyway, one was forced to trust them: the guide of Ibn Battuta’s caravan was blind in one eye, or at least that’s what the caravan members were led to believe, but he remained the authority on a route that was not easily visible, as a Roman commercial road would be, a route that wound through loose, stony ground and was always susceptible, as they were also led to believe, to being hidden beneath “mountains of sand.”

While desert guides would protect the traveler from bandits and from getting lost, there were other concerns: lack of drinkable water, unbearable heat, fleas, flies, and snakes. Read about the complicated logistics of traveling across the Sahara in the Middle Ages at Lapham’s Quarterly. -via Digg