Not all families are perfect. In fact, rarely does a family come without something “that’s complicated.”

Sometimes it’s generational differences, other times it’s personal conflicts with family members who lack social skills, or it’s straight up someone just not being able to let go. Whatever the case, no family’s perfect.

This is evident in Reddit user u/ThrowRAwannaknow_’s situation as well, who shared his story on the Am I The A-hole subreddit, asking people if he was wrong to tell his son the truth about why both mom and dad don’t talk to the son’s grandparents, and, in turn, upset the grandparents with his honesty.

Families aren’t perfect, but it takes some guts to be honest about it, especially if your teen son asks for an explanation about it 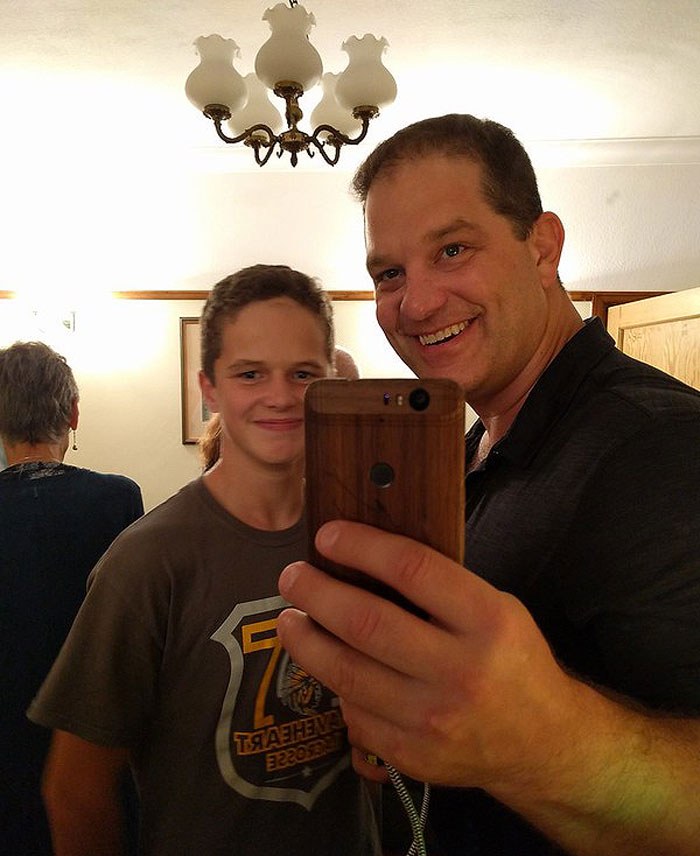 So, u/ThrowRAwannaknow_, who’s a dad of a 16-year-old son now, and with whom Bored Panda got in touch, shared a story of how his son asked him why neither the mom, nor the dad, talk to his grandparents who have recently attempted to reconcile their relationship with the grandson—for the first time in decades.

You see, OP used to be homeless. One day when he was just trying to get out of the rain, he hid in one of the restaurants in his area, and the staff wanted to kick him out. But a lovely lady customer chimed in, said he was actually there to meet her, and saved him from the relentless rain.

One thing led to another and the two got together. OP slowly got his life together, and his now wife helped him immensely. But this union did not go well with the Mrs’ parents who are of the opinion that the dad is simply “trash”. 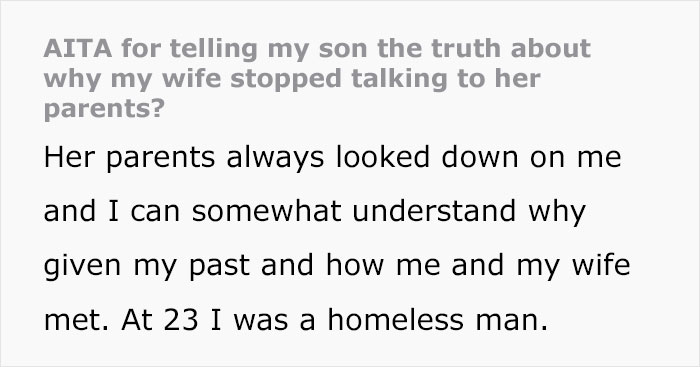 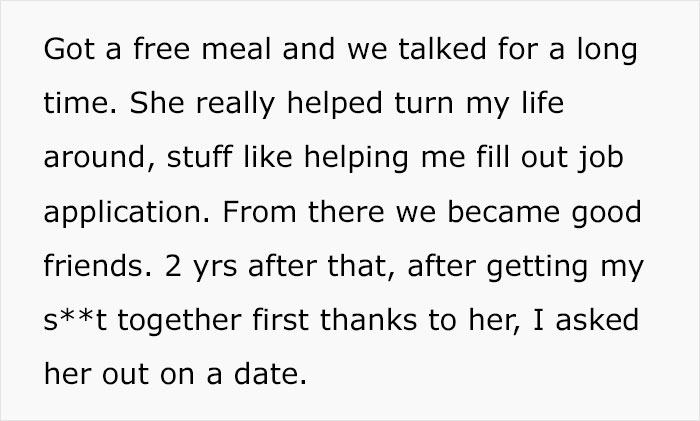 And, turns out, the grandparents never invested themselves at all in their lives, not for the wedding, nor for the birth of their son. Well, until now. And even now with certain conditions.

Grandpa and grandma decided they would love to reconcile with their grandson. While the parents aren’t on good terms with them, that doesn’t mean the son should not be allowed to spend time with his family. 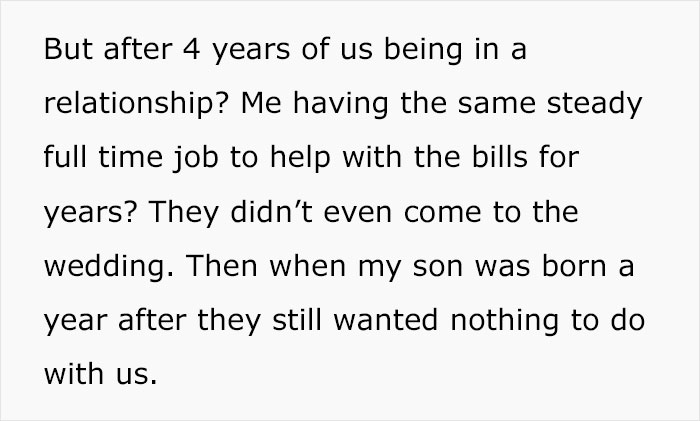 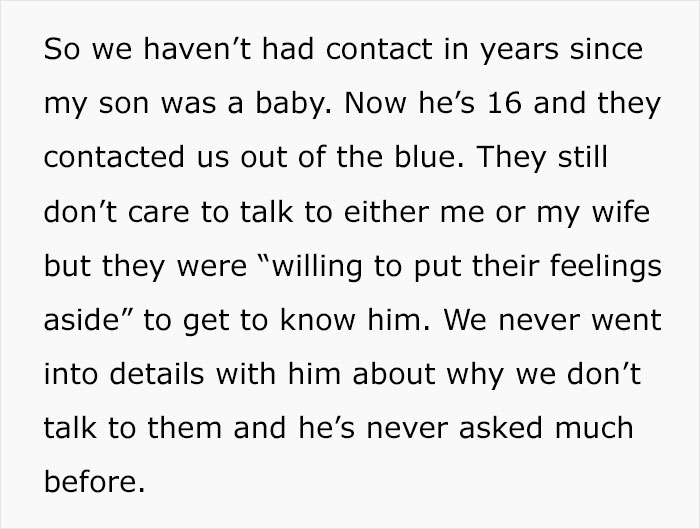 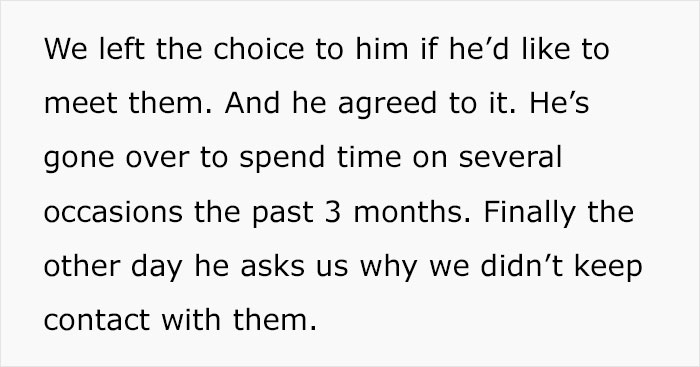 Several visits to the grandparents in, the son got curious and asked dad why they don’t talk. And the dad thought it was right to be honest with the kid. He explained the situation, which left the son upset that anyone would ever think that.

And even more upset were the grandparents as they did not appreciate the honesty. While the dad did the right thing and tried to talk to the son on multiple occasions, he didn’t budge and still sided with his parents and refused to see the grandparents as “he doesn’t want to be involved with people like that.”

We asked the dad if there were any developments in the story since its posting on Reddit, and he said this: “I had one final conversation with my son. Some of the comments on AITA made me realize that I should’ve told my son the whole story before he got to know his grandparents for 3 months. And so I apologized to him for not saying anything right away.” 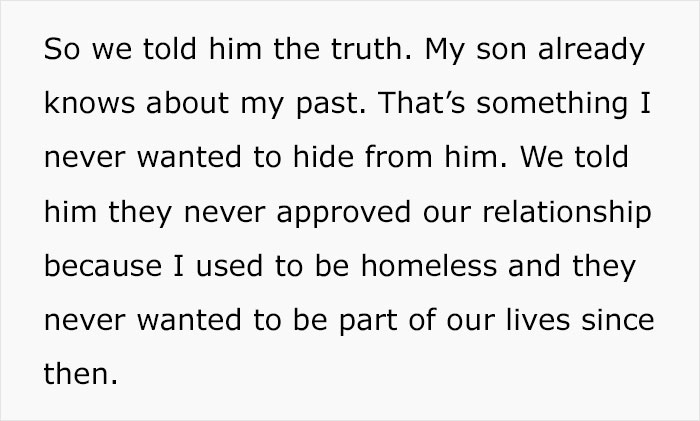 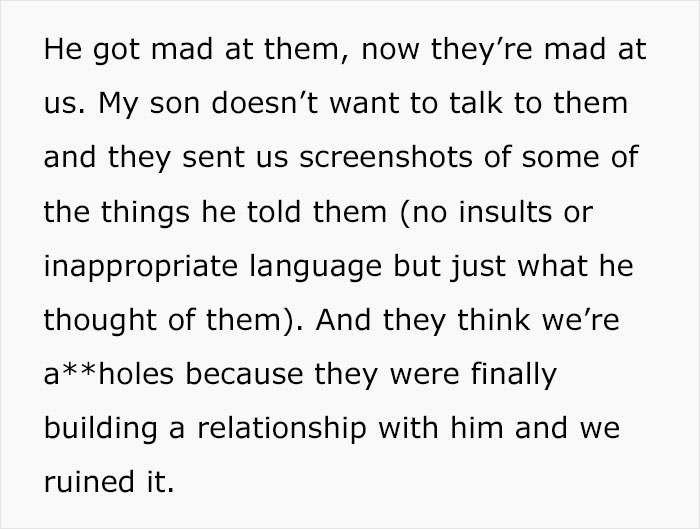 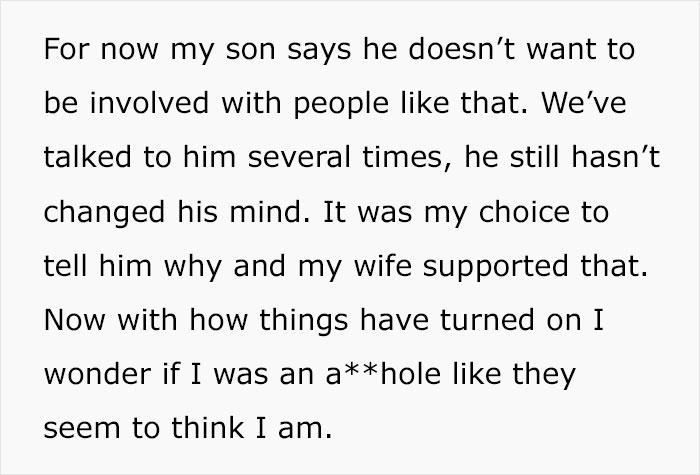 But it got OP thinking, while his wife supported his decision, was it really the right one to be honest and truthful? And so, he asked the people of the AITA community whether he was wrong.

No, heck no, people didn’t think he was wrong at all. Was he supposed to lie? No. Actions have consequences and it’s the grandparents who are the instigators here, not him—he actually did right by telling the truth, and he wasn’t spiteful or cruel.

“[The AITA community] did give me some perspective. It made me feel less like it was my fault and it’s my son’s choice who he wants in his life,” explained the dad. “As for our next step, we’ll just be ceasing contact with them completely. If my son decides he’d like to speak with them again, then we will work something out.” 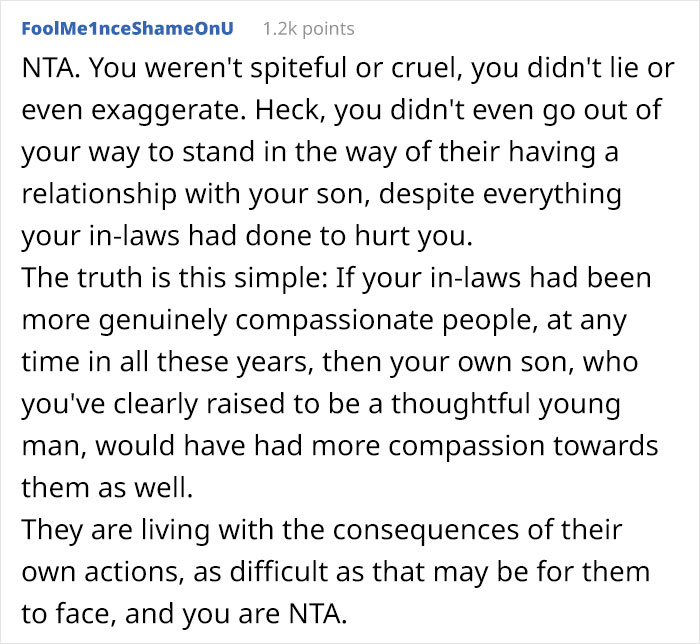 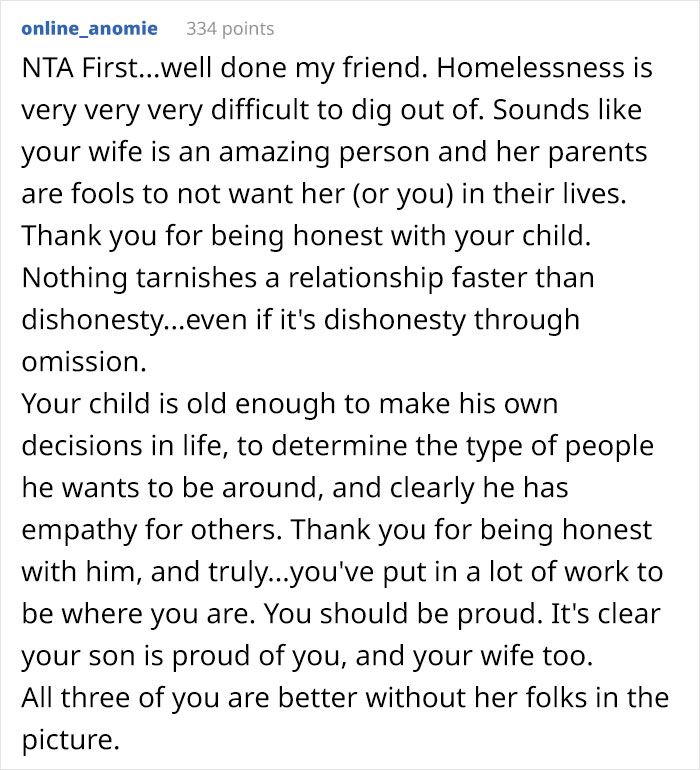 Lastly, we’ve asked ThrowREwannaknow if he had any advice to those dealing with similar situations. He had this to say: “my only advice is be honest with your kids. Give them space and respect their choices.”

You can check out the whole post in context here. But before you go, leave us a comment with your thoughts on this in the comment section below!

The post Dad Explains To 16 Y.O. Son That His Grandparents Cut Their Family Off Because Dad Used To Be Homeless, Ends Up Causing Family Drama first appeared on Bored Panda.