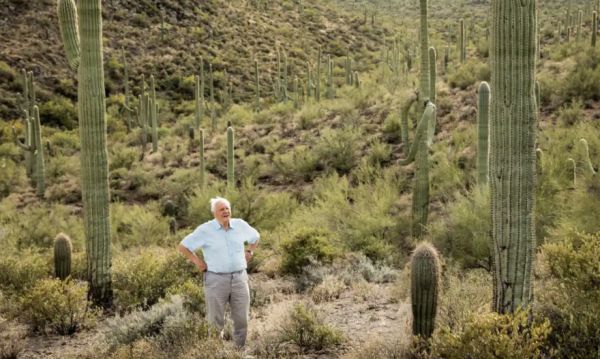 Sir David Attenborough is 95 years old, and has spent a lifetime teaching us about the wonders of nature. Yet he’s not retired, and is still risking life and limb to bring us more Mother Nature. He is filming a new BBC Earth series called The Green Planet, which is about plants. You’d think that the subject matter would be a little safer for a man his age than chasing after animals, but no. Attenborough has been injured by a cactus. It’s far from the first time he’s been injured on the job.

Why would you want to touch a cactus? To prove how dangerous they are.

Point proved, I guess. And also because Attenborough is as hard as nails. He was once in a boat that got caught in an Indonesian whirlpool. He trapped a caiman in Guyana. He’s been crawled over by a bunch of wild mountain gorillas. He has met cannibals, and was knocked unconscious while filming dolphins in the Bahamas. There’s tough, and then there’s Attenborough.

A cheeky yet reverent article about Attenborough at the Guardian implies that Attenborough is expected to be okay. -via Nag on the Lake